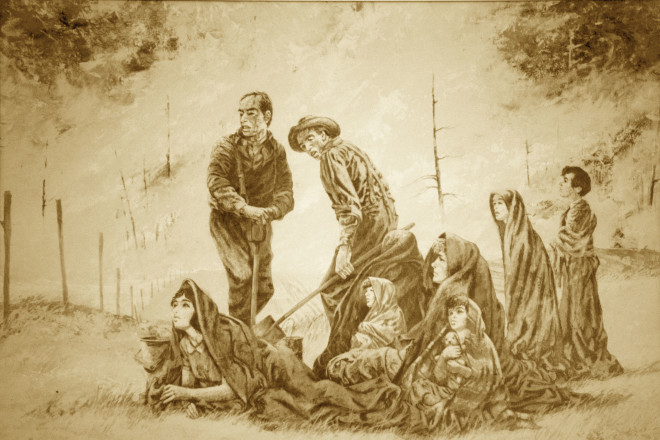 “We are burning up. Send help.”

This short, dire message to Wisconsin Governor Lucius Fairchild was the first contact sent from the epicenter of America’s deadliest fire ever. It was carried by boat as the lone telegraph line out of Peshtigo, Wisconsin had been burned weeks before. It gave none of the details which were, in any event, indescribable. 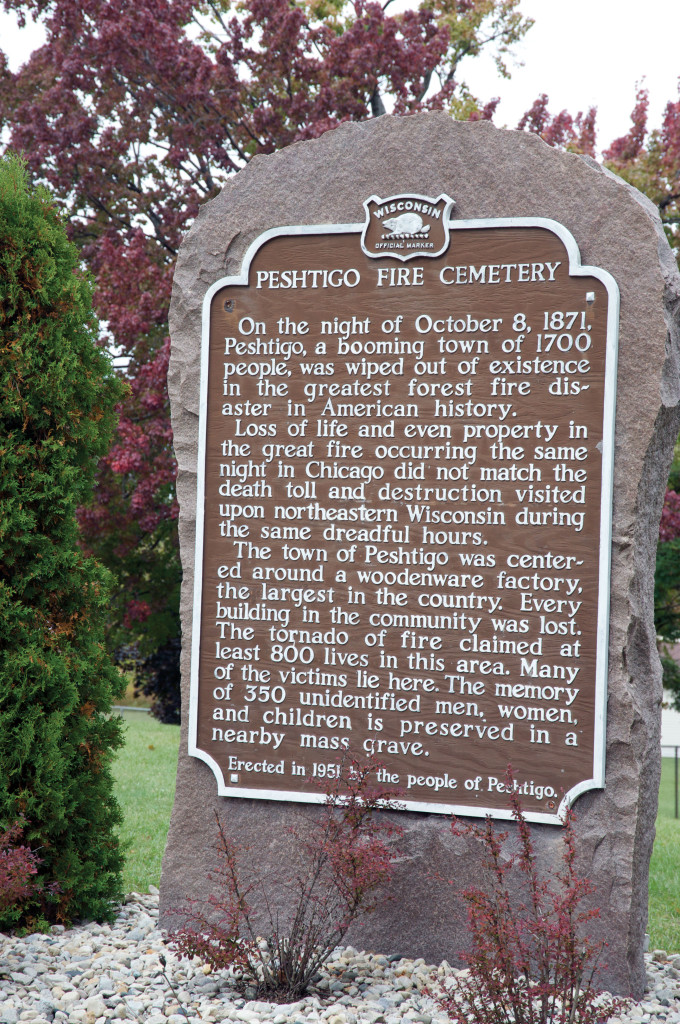 A marker at the spot of the Peshtigo Fire cemetery.

On October 8, 1871, a firestorm of immense proportions and staggering heat had descended like a tornado on the small settlement of Peshtigo. It burned hundreds of thousands of acres along the western shore of Green Bay, parts of Kewaunee County and into southern Door County. In the space of two hours’ time, between 1,500 and 2,400 men, women and children either burned or were suffocated in the oxygen-deprived air. In many cases, the fire completely obliterated its victims. According to Denise Gess and William Lutz in Firestorm in Peshtigo, survivors searching for remains of the dead found that very often “even the ashes were gone, blown away by the wind.” Although ashes blew away, the personal stories that remain are heartbreaking.

A newspaper reporter who visited Peshtigo a month after the fire was overcome by the destruction. “The half has not been told; the whole will never be known…On Friday last, twenty-six dead bodies were found in the woods, and on Saturday, thirty-six. The woods and fields are literally full of dead bodies…we found some teeth, a jackknife and a slate pencil. It must have been all that remained of a promising boy.”

A burial party found a twelve year old boy digging graves for his entire family. “The bodies…were not really bodies but lumps of charred flesh, some with a few remnants of burned clothing, others with bones sticking out.” They fit all the remains in a few of the nine small coffins he had made, buried them and moved on to the next farm. The boy then dug up the boxes, separated the remains into his nine boxes and carried them one by one on his small shoulders to the cemetery a mile away.

A steamer loaded with immigrant families, mostly Italians, arrived in Peshtigo. They had come to work on the expanding railroad. They had said good-bye to family and friends and boarded the boat to Peshtigo, Wisconsin with a mix of excitement and foreboding. They arrived the day before the fire. They were “never heard from again.” 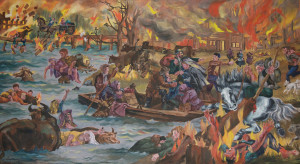 John Bagnall found the body of a young girl with long, curly hair lying in a field. She had been unburned but was suffocated and looked as if she were peacefully asleep. No one from her family remained to claim her body. Before it was taken to a mass grave, he clipped a lock of her hair and carried it in his wallet for the rest of his life.

The carcasses of fifty horses lay in regular rows where they had stood in their stalls in a Peshtigo livery stable. Nothing was left of the stable building.

In Williamsonville, a small Door County settlement south of Sturgeon Bay, 59 of the 76 inhabitants were burned. Heaps of bodies and body parts were found, most charred beyond recognition. A survivor reported seeing two men attempting to kill themselves by pounding their heads against stumps as the rest of their bodies roasted. Five people survived by seeking refuge in a nearby well; two with them in the well perished.

Most Wisconsinites remember learning about the Peshtigo Fire in elementary school. If asked, we might recall the year it took place or the fact that it occurred on the same day as the Chicago Fire and that, though larger and ten times more deadly, it received little attention from the rest of the world. When questioned about the cause of either fire, an image of Mrs. O’Leary’s cow with the extended hind leg might come to mind. We might guess (correctly) that 1871 was a dry year or (incorrectly) that a lightening storm was to blame. Beyond that, most of us know very little about the factors that contributed to the third largest quasi-natural disaster in American history. We might, in fact, remember it as an unfortunate, isolated event. 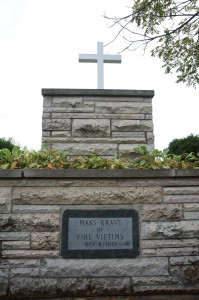 John Muir, one of the nation’s most respected environmental thinkers, knew a thing or two about the natural world and our relationship with it. He wrote, “When we try to pick out anything by itself, we find it hitched to everything else in the universe.” He knew that the Peshtigo Fire was not an isolated anomaly; it was “hitched” to many events and practices of the day.

Peshtigo, Wisconsin in the second half of the 19th century was a place far different than it is today. The population of roughly 2,000 was growing by 50 to 100 people each week. Although some were farming families, most newcomers were transients who came to work in the logging camps or on the railroads. The quickly growing village had several new churches but no police station, no jail, and no fire station. There were close to 60 saloons in the area and almost as many houses of prostitution. It was a bustling, new-world town busy with the business at hand, most of which, in one way or another, revolved around the cutting of trees. Going about their daily routines, people were too busy to pay much attention to the many signs of danger surrounding them.

Newly arrived immigrant families from Sweden, Germany, Norway and Belgium worked hard clearing their $1.25 per acre lots as quickly as possible to prepare them for crops. It could take a family a decade to completely clear an 80-acre lot. As the farmers cleared their land, they cut the trees and either pulled out the stumps or set fire to them. The stumps burned, like candles, sometimes for months. 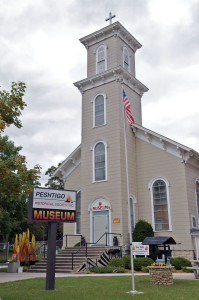 In the wild lands surrounding the village and farms, forests were so thick they were difficult to walk through. There were “at least a billion trees covering 1 million acres” and there were plenty of lumberjacks to fell them. Loggers worked their way across the country leaving denuded forests in their wake. Wisconsin was the next whistle stop on a journey that had begun in Maine and Vermont and made its way westward. “Trees were currency here and nothing else offered as much money-making power.”

If trees were currency, the Pinus strobus was the highest denomination. Tall and straight, each tree provided enough lumber to build a house. Most years the magnificent white pines were floated down the powerful Peshtigo River to one of the numerous sawmills that stood where Menominee Indians had once lived in their thatched reed huts. In 1871, however, no rain had fallen for 11 weeks and water levels were too low to transport the logs. They were stacked along the banks of the river like huge piles of firewood waiting for the river to rise. In the meantime, loggers continued cutting down trees and burning the unusable dross.

The other big business of the day was the Northwest and Chicago Railroad which had made its way to the Peshtigo area. Wealthy financiers who had already profited from the railroads were obsessed with the prospect of even greater riches to be gained by getting goods to new markets faster. Railway workers were encouraged with substantial monetary rewards to work at a breakneck pace. They piled logs from cut trees on both sides of the right of way and let them burn with little or no supervision.

With fewer trees to hold moisture in the soil and no rain since July, conditions became dangerously dry by October. Small fires burned everywhere and men became exhausted extinguishing them. The flames worked their way into the carbon-rich layers of peat underlying the topsoil. Once ignited, the peat fires 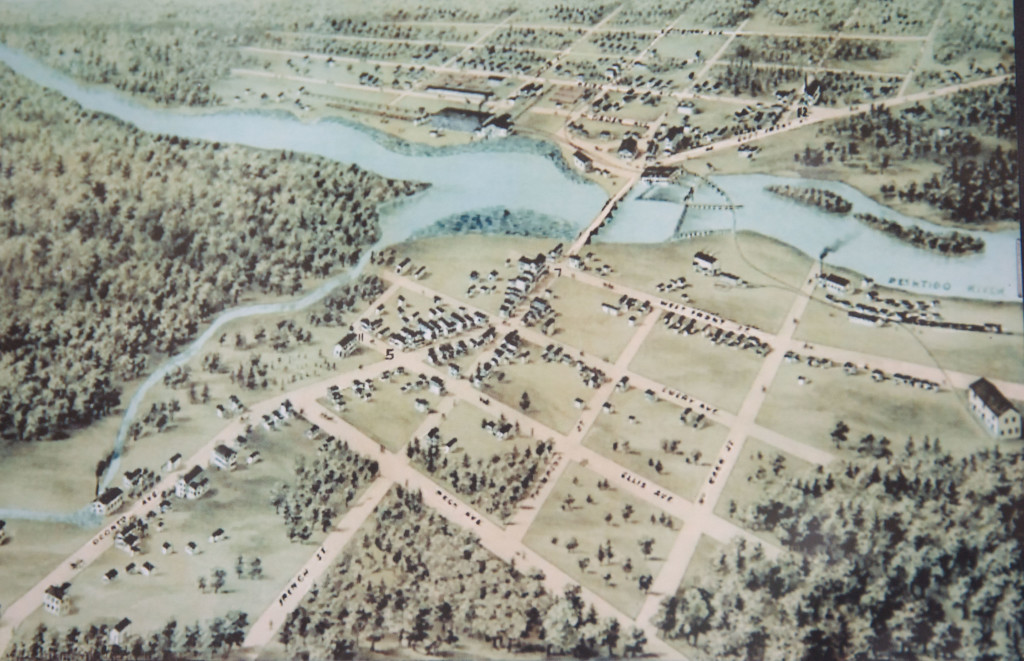 smoldered for weeks, spreading and bursting into flame when they came into contact with piles of felled wood.

By October 8, 1871, fires had become a daily part of life in Peshtigo. For some they were a nuisance to be endured, for others the cause of increased anxiety. People covered their mouths with cloths trying to breathe the smoke-filled air. The acrid smell of burnt sap was everywhere. Boats approaching Peshtigo couldn’t see the lighthouse signals from Green Island because the smoke was too thick. Schools were closed due to “lethargy” in the children. Although signs of impending danger were everywhere, in many ways, life continued as usual with church services and parties and nights spent at the saloons. Fearing the worst, some people buried their belongings, dug fire trenches and began to plan their escape if escape was needed. Others just hoped for the best.

When the fire tornado hit on the evening of October 8, 1871, there was no time for escape. The conflagration was unlike any fire ever encountered before. Now called the Peshtigo Paradigm, this fire whirled at speeds of 90 miles per hour and sent balls of flames shooting off in every direction. It generated enough heat to split rocks in two, melt church bells and turn sand to glass. One reporter said that all was destroyed “faster than it takes to write these words…” 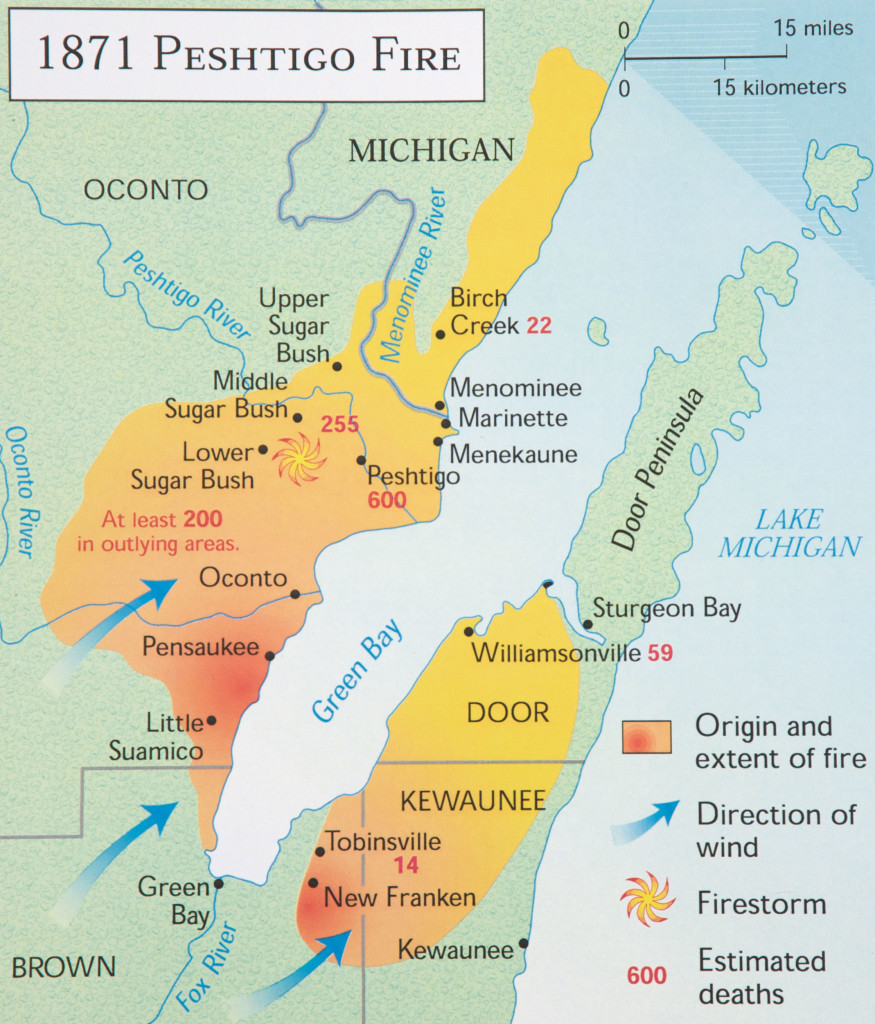 Ecologists, meteorologists and historians have studied the Peshtigo Fire for decades and have used the lessons learned to inform wiser methods of land use. If there is one over-riding piece of wisdom to be gained from the embers of the Peshtigo Fire, it may be this:  “After thirty years of clearing, burning, and building…man was the architect, not only of cities, farms, and mills, but of destruction, and wounded Nature would fight back.” As we see signs all around us of “wounded Nature,” we would do well to reflect on the experiences of a small town called Peshtigo.

All quotes unless otherwise attributed were taken from Firestorm in Peshtigo by Denise Gess and William Lutz, published by Henry Holt and Company, LLC, copyright 2002.