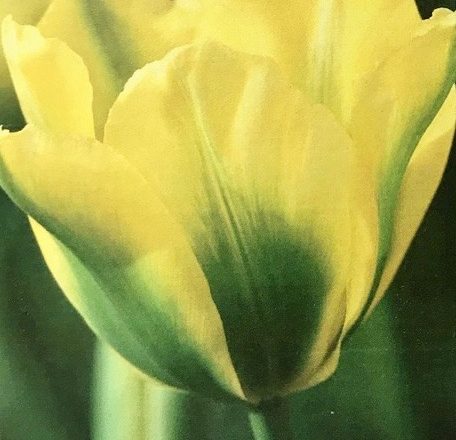 Because of her kindness to a stranger from the Netherlands, Joy Lang is the exclusive northeast Wisconsin distributor of a green-and-gold tulip developed by a Dutch wholesale supplier of flower bulbs.

It all began a couple of years ago when Jack Haasnoot, a sales representative for Stuifbergen Flower Bulbs Export of Noordwijkerhout, Netherlands, made a cold call at Jerry’s Flowers.

“He had walked into our shop,” Lang said. “His English is very bad, and I don’t think people gave him the time of day.”

In fact, Lang said at one business that will go unnamed, the owner simply walked away from the Dutch bulb salesperson. But she did not.

“He liked us, and I said, ‘I would like to do business with you,’” she recalled.

But, she added that he had really arrived too late in the 2017 season to do business. She remembers that he was very excited to be going to his first Green Bay Packers football game at Lambeau Field.

“He had never been to a football game,” she said. “It was an awful Monday-night game in November, and it just poured. They also lost [30-17 to the Detroit Lions]. Everything about it was bad. This guy thought it was great.”

Last year he returned earlier in the season and said his company was developing a yellow-and-green Packer tulip.

“He said, ‘Let’s think of a name,’” Lang said. “We came up with Packer Pride, Packer Blooms, but after a while, we figured out we couldn’t have Packers in the name because of copyright. He came up with the name Green and Gold Tulip. It’s the only company I know that has it. This is the first year they are available.”

She said the new variety of tulip is also available at a Milwaukee flower shop.

“We’ll have them until we sell out, and we’ve already sold some,” she said. “Hopefully the response is good, and we’ll have more next year. What we really need is a green-and-gold daffodil.”