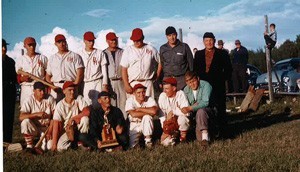 The 1953 Baileys Harbor baseball team went to the playoffs.

Baileys Harbor will hold two events in the next few weeks to honor the baseball teams that have represented the town since 1874.

On Sunday, July 28, six members of the team that won the Door County Baseball League Playoff Championship in 1953 will be honored at their 60-year reunion at 1 pm before the 1:30 pm game between Baileys Harbor and West Jacksonport at the Baileys Harbor Athletic Complex. The team members who have been contacted about attending are Chuck Goss, Bill, Bob and Don Hanson, Earl Shram and Tom Zak. So far, the organizers of the event have not been able to contact Peter Paul, believed to be the only other living member of the 1953 championship team.

Bobby Schultz, who is organizing the project with Bill Becker, says July 28 will also be Fan Appreciation Day, with a pig roast and all the trimmings. The community is invited to attend.

At 7 pm, Wednesday, Aug. 14, Schultz and Becker will present a program on the history of baseball in Baileys Harbor at a meeting of the Baileys Harbor Historical Society at the town hall. Both men were very involved with the town team in their younger days. All men who have played on teams through the years are invited to attend and be recognized.

Although there is a long-standing story that Abner Doubleday invented baseball in Cooperstown, New York, in 1839, it has been generally discredited. Doubleday, a student at West Point at that time, never claimed to have invented the game and never, to anyone’s knowledge, visited Cooperstown. It is true that baseball became very popular in the United States after the Civil War.

Baileys Harbor’s first team in 1874, called the Baileys Harbor Foresters, played on a field right downtown, where the old bank building now stands. In the 1950s, they moved to McArdle Field on County E. The Door-Kewaunee League was formed in 1927. Later it was made up only of teams from Door County. At one time the local team was called the Harborites. Since 1970, they’ve been the Baileys Harbor Athletics.

For much of the 20th century, the local Lions Club sponsored the town and little league teams. More recently, they have been sponsored by the Baileys Harbor Athletic Club. The baseball field in the athletic park on Summit Road was dedicated in 1980 to the late Ernald Viste, a long-time teacher of the seventh and eighth grades at the Baileys Harbor School and, for 54 years, the town clerk.