Margaret Lockwood doesn’t remember being especially interested in art as a child, but a worksheet from second grade saved by her mother indicates that the talent was there. “I was supposed to write something about the caterpillar and then color it,” Margaret says. “I didn’t stop with the caterpillar, but added grass, sky, trees and more caterpillars. Now I look at that picture and realize I was an artist already. 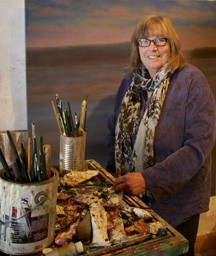 Margaret Lockwood at her studio at Woodwalk Gallery, which she co-owns with her husband Allin Walker.

“I was recognized as the class artist through grade school and high school,” says Margaret. Win Jones, now an occasional guest instructor at Peninsula School of Art School, was her high school art teacher in Barrington, Illinois. “He was such an inspiration,” she says, “and the atmospheric feeling of his watercolors was a strong influence.

“But when I went to college, I thought my father wouldn’t approve of a degree in art because it wouldn’t lead to a ‘real job.’ (Also, I didn’t trust that I was good enough.) So I majored in social work and minored in art. After graduation, I got a job working in foster care and adoption with a child welfare agency. I married and moved to St. Louis. After our first child was born, like most women of my generation, I became a stay-at-home mom. A friend and I signed up for a weekly weaving seminar in a woman’s home as our ‘mothers’ day out.’”

For Margaret, it very quickly turned into more than a young mother’s escape. She soon acquired two looms, one of them 60 inches wide, and was soon doing gallery exhibits, commissioned work for hotel lobbies and she founded St. Louis Contemporary Crafts.

She was well established as a weaver in the St. Louis art community, but what she really wanted to do was paint. First she took drawing and painting classes at a nearby community college, then enrolled at Fontbonne University. It took her three years to complete an MFA in painting while raising a young family, but along with the degree she gained experience as an assistant in drawing classes and hanging shows. “Finally,” she says, “I was a painter!”

After that, things just came together. Door County had been part of her life for years. She and her first husband bought property on Gibraltar Bluff Road in the mid-1970s, and her parents and brother also bought property next to them. “I’d go back to St. Louis,” Margaret says, “and paint Door County scenes – mostly trees – from memory.” 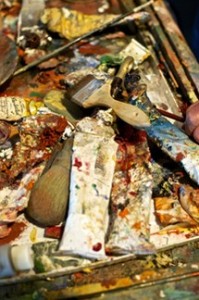 Some time later, after a divorce, she met and married Allin Walker, a pastor who at that time headed the St. Louis branch of a national mental health agency. “We’d been married about 18 months,” Margaret says, “when I said to him one morning, ‘You know, Allin, I’m really glad I married you, but if I hadn’t, I might have liked to go to Door County and open an art gallery or something.’ About two o’clock that afternoon he called and said, ‘Let’s have dinner and talk about it.’ By that time, I’d forgotten my comment, and I said, ‘Talk about what?’ Two weeks later, we were here, buying property.”

On July 4, 1994, they opened Woodwalk Gallery (a combination of Lockwood and Walker) in its first location, a little old schoolhouse in Juddville. For two years, Allin had a job in Milwaukee with an agency that provided health care for the homeless. From 1996-99, the two of them served as co-directors of Peninsula School of Art, with Allin heading the fundraising effort for the new facility.

This is their ninth season in the old dairy barn next to their home on County G, southwest of Egg Harbor. “If we had sat down years ago and said, ‘OK, let’s have an art gallery that’s also a work space for artists and all kinds of classes. And while we’re at it, let’s have concerts on Friday and Saturday nights and, why not weddings, too,’ it probably would not have happened at all. I think we’re evolutionaries rather than planners. The way this has all come together has a nice rhythm to it.”

In the Door County “season,” Margaret is too busy with all those things that just evolved, but winters are devoted to painting. Her favorite canvas size is about 60 x 54 inches. “It occurred to me some time ago,” she says, “that my loom was 60 inches wide. It’s a size I just feel comfortable with. When I’m working on one of those big canvases, I really feel that I could physically get right inside the painting.”

Her style is abstract, as were her woven creations. And, there are other connections. “I really learned about color by using textiles,” Margaret says. “And when you look at my paintings you can see that I am still sort of a weaver with warp and weft going on.” 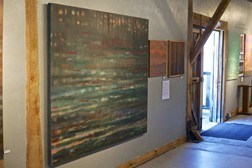 It’s true. A huge abstract work on the barn wall near where this interview was going on has what could be trees near the top. (Margaret likes for viewers to draw their own impressions.) Vertical lines that continue to the bottom of the painting may be tree roots. Horizontal lines may be reminiscent of waves…or perhaps layers beneath the forest floor. (Assuming, of course, that the shapes above are trees.) Whatever the viewer sees, it’s lovely and soothing.

In the gallery that just evolved, 50 artists – about half local and the rest people with summer homes here or teachers at the art school – display a wide variety of styles. Margaret says that she selected a lot of them because their creations make a viewer think about what they see – have their own “voyage in their head.” This year, in honor of Woodwalk’s 20th anniversary, each of the 50 artists is creating something 20 inches square.

Is there another generation of artists in her family? Perhaps artists, certainly entrepreneurs. During a visit last summer, two very young granddaughters made beaded bracelets and advertised them for sale in the gallery at $2, $3 and $4, with profits to benefit the Door County Humane Society. Their mothers encouragingly offered to double whatever they made. Their sales totaled $77 – thanks to a few extra-generous customers, Margaret believes – and the Humane Society received $154 of cat and dog food!