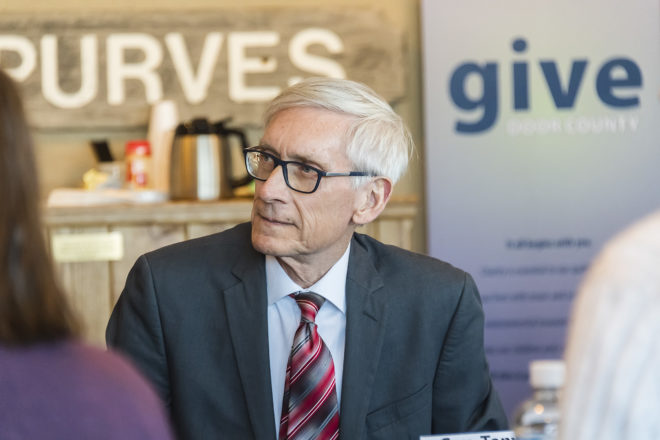 Gov. Tony Evers is proving to be a man of his word. When he declared 2019 the Year of Clean Drinking Water in Wisconsin during his January State of the State address, he followed that up with a state budget that includes up to $70 million for water-quality programs and the hiring of five new scientists for the Department of Natural Resources.

On March 4, Gov. Evers and DNR Secretary Preston Cole reiterated their commitment to science and water quality during a roundtable discussion hosted by the Door County Community Foundation and held at the Door County Maritime Museum.

During a quick press interview after the roundtable, Evers said the water-quality programs in his proposed 2019-21 budget include bonding authority to help cities replace lead pipes and programs to help farmers contain manure and homeowners to drill new wells.

“We’re trying to address the issue in a couple of different ways,” he said, adding that the attacks on various fronts must be long term. “I think this is a bipartisan issue.”

Asked about how he thought his budget would fare with the Republican-controlled legislature, he said he is confident that the priority areas of water, education and transportation should pass Republican scrutiny.

“At this point in time, it’s all about political posturing,” he said, adding that he will veto any proposed Republican rewrite of the budget if it does not reflect the interests of Wisconsin.

Also in attendance but not at the table were Rep. Joel Kitchens and Senators André Jacque and Dave Hansen, as well as representatives from a variety of area environmental groups, such as Dean Hoeggers, president and executive director of the Clean Water Action Council; and Nancy Utesch of Kewaunee Cares.

DNR Secretary Cole introduced himself by saying, “I get to be one of the doers,” and he referred to Evers as “the heavyweight champion, and, as you know, we have to have a champion for water quality.”

The first question Evers took was from Clay of the land trust, who said he was going to a conference of his colleagues at the end of the week and hoped to be able to tell them directly from the governor’s lips that the important Knowles-Nelson Stewardship Program, which is set to expire in 2020, would continue to be funded in order to protect valuable natural areas.

Evers confirmed that the state does intend to make it a permanent budget budget item.

“It’s part of our heritage,” he said.

Asked by Eliot how you reconcile the idea that a farmer may be following all the regulations but wells remain tainted, and perhaps regulations don’t go far enough, Evers stressed that science will take the lead in any future legislation, which should satisfy environmentalists and business interests.

Clay pointed out that not all water-related news is doom and gloom. “We have piping plovers nesting in the bay of Green Bay for the first time in 70 years. A peregrine falcon off Washington Island two years in a row, a successful nesting.”

When Evers asked Olson, the sanitarian, for his thoughts, Olson caused a round of laughter by saying, “It’s hard first not to be a little enamored by the governor of this state saying in a speech about water and how important it is, and also the [DNR] secretary using the word ‘silurian.’ I feel like this is a movie or something. It’s really humbling.” He added that it sounds like the state is finally on the right track with this kind of attention to water-quality issues.

Annie Egan presented Evers with a copy The Death and Life of the Great Lakes by her son, Dan Egan, and invited Evers to attend the Celebrate Water Door County summit June 4-6.

The day after the roundtable discussion, four northeastern Wisconsin county executives and the Oneida Nation signed a water-quality pact that aims to reduce phosphorus runoff into the bay of Green Bay by 40 percent by 2038. Brown, Fond du Lac, Outagamie and Winnebago counties signed on.