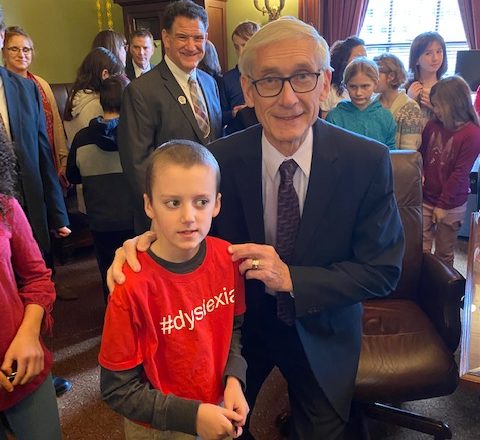 Sister Bay resident Kari Baumann and her son, Grady, visited the state Capitol in Madison Wednesday for the signing of a bill that they and other dyslexia advocates have spent a long time fighting for.

The state officially took a new stance on dyslexia and reading education when Gov. Tony Evers signed Wisconsin’s first dyslexia legislation. The state had been one of just seven states without dyslexia laws.

Assembly Bill 110 orders the state to create its first dyslexia guidebook, providing teachers, administrators, staff and parents with information about teaching children who have dyslexia.

“This is huge for Grady and for us,” said Baumann, who has been an advocate for dyslexia-education reform since her son was diagnosed with the condition. “It’s a big first step. It means that schools can now be able to know what dyslexia is and not hide behind the excuse that they don’t know what it is. It’s a huge step for struggling readers and kids with dyslexia.”

“The word ‘dyslexia’ will now be spoken in Wisconsin schools, and this guidebook is the first step to inform teachers, administrators, staff and parents about dyslexia as how it affects so many children,” according to a statement from Decoding Dyslexia, a state advocacy group. Representatives brought forth from the International Dyslexia Association and the Wisconsin State Reading Association will create the guidebook during the next year.