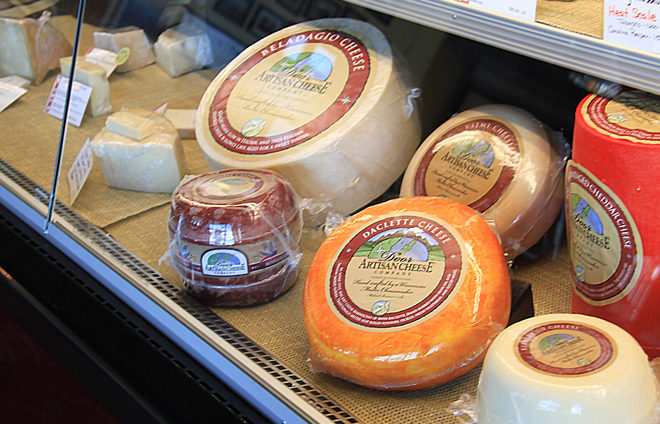 UPDATED MAR. 7, 9:45 am: Door Artisan Cheese cheesemaker Sara Richards earned 1st place with Door Artisan Cheese’s Top Hat Cheddar in the natural rind cheddar category. The cheese has also earned a spot on the Top 20 finalists lists and is in the running to be named the nation’s best cheese. The winner will be announced the evening of March 7.

Wisconsin is unique in the culinary world in that it possesses a superpower: one found only here in the state and one that is known for its prowess in the flavor department. That superpower is Wisconsin cheese. Wisconsin is the only state that has a Master Cheesemaker Program, which sets high standards for cheese production and allows cheesemakers to truly become experts in their craft. Wisconsin can also reliably claim to be the state with the highest number of awarded cheeses at some of the largest cheese competitions.

It’s undeniable that America’s Dairyland has a special grasp on cheesemaking, and therefore, the chefs, home cooks and cheese purveyors here are also richly supplied with a abundant toolbox of delicious varieties to use. Not only is access to the cheese easy, but the ability to talk directly to farmers and cheesemakers is also a key advantage.

Looking closer at the cheese and dairy connections here in Door County, it is evident that farmers, cheesemakers and chefs are interconnected. The county is now home to two cheese-making factories that use milk from local farms: Renard’s Cheese since 1961 and Door Artisan Cheese Company since 2016. And, like the dairy farmers they work with, their work is never done. Production is daily, year-round, with no ceasing during the off-season. This means visitors also have access to the fresh curds, a variety of artisan cheese and daily samplings. Both factories offer tours and the chance to talk with resident cheesemakers.

Renard’s Cheese uses milk from dairy farms within 30 miles of the factory, primarily from within Door County. Master Cheese Maker Chris Renard is a third-generation cheesemaker, following in the footsteps of his grandpa and father. Since launching the company in 1961, the production has more than tripled. The factory processes about 90,000 pounds of milk a day and makes more than 50 types of cheese and cheese spreads.

At the Sturgeon Bay shop location, an impressive variety of cheese is on display. The shop offers daily sampling, and I tried one of the bestsellers: the Terrific Trio cheese. It’s a blend of Cheddar, Parmesan and Gouda, with a slightly crumbly texture and salty, savory flavor – ideal for grating over pasta and salads or savoring by itself. Other varieties caught my eye as flavor combinations I’d never seen: Morel and Leek Jack, Maple Syrup Cheddar, and Cranberry Jalapeño Monterey Jack, to name a few.

However, the simplest cheese remains the top seller: fresh cheese curds. These nuggets are the freshest variety of cheese you can buy, and if you’re lucky enough to get some made that morning, they have a squeaky quality to them. Curds appear on restaurant menus across the county and beyond. Fresh or fried, they are squeaky only if consumed within the first few days of being made, which is why the fresh daily curds are so popular.

Door Artisan Cheese Company in Egg Harbor launched cheese production in early 2017 and since then has been busy making its selection of cheeses on location. The factory uses milk from local dairies and Red Barn Family Farms, a sustainable and humane family-farm co-op based in Appleton. The Cave Market is currently open five days a week, offering samplings of cheese, wine and spirits. The attached restaurant, Glacier Ledge, is undergoing a remodel to build out a bar area and plans to reopen for the season on March 29.

The Door Artisan Cheese case features its own varieties along with other award-winning Wisconsin and international favorites. For local flavor, try the Valmy Cheese, a cheesemaker’s original, which is aged with a beer-washed rind; or the Zivile, a Swedish-style fontina aged two to five months that is excellent for melting to create a creamy pasta or fondue.

Both Renard’s and Door Artisan Cheese Company competed in the World Championship Cheese Contest March 6-8, with winners announced the evening of March 8. The event is considered the industry standard for success, and Wisconsin cheesemakers often rank in the top spots. In 2018, Door Artisan cheesemakers Darrel Demeter and Jim Demeter took home awards for their Top Hat Cheddar and Crema Pressato. View the top awards at uschampioncheese.org.