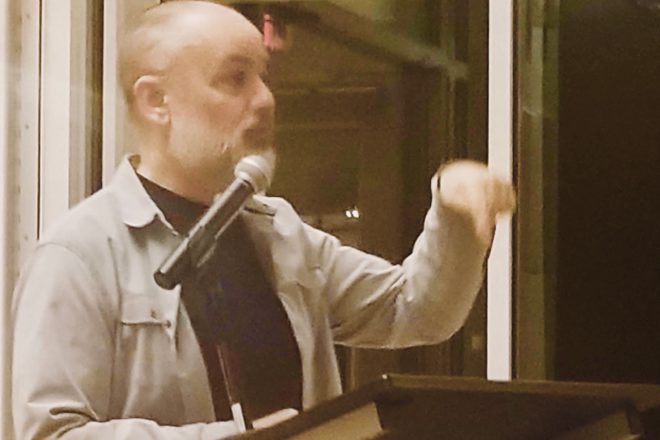 Michael Perry speaking during a fundraiser for Write On, Door County on Nov. 6. Submitted.

We were trying to hurry out the door on our way to the Michael Perry dinner to benefit Write On, Door County last Wednesday night when my mom handed me a signed copy of Population 485, one of Perry’s books. My husband had just gotten in the house from picking up our three kids from day care, and I had just changed and was nearly ready to go. Amid the chaos of shuffling kids, bags, coats and other detritus from a long day, my mom handed the book to me and said, “See? I do read.”

My mom is many things – many wonderful things (most of all, active) – but I’ve never known her to be a reader or to sit still for long stretches of time. It seemed natural to ask, “Why do you have this?”

She explained that Perry came to help out with a FOG (Friends of Gibraltar) event years ago when she was serving on the board, and that’s when she had her copy signed. She said that he had come to work with students at Gibraltar, and that he was very nice. I quickly thumbed through the pages and left.

When Lauren Bremer, the managing director of Write On, Door County, went up to the podium to introduce Perry, she also spoke of Perry’s generosity. When she was a Gibraltar High School English teacher, she knew she wanted to teach some of his books and reached out to him, asking which one he would recommend. Population 485 was one of them, and in addition to returning his recommendations, he also sent signed copies of his books.

After the introduction from Bremer, Perry shared a few anecdotes and read excerpts from many of his books. I was only superficially familiar with his work (I shy away from nonfiction), but I was thoroughly entertained while he spoke, as was the audience in the room at the Kress Pavilion. During the evening, I learned why Perry’s book is one of the only ones my mom’s read in recent years: He’s funny and charming and tells a story with a refreshing amount of honesty.

Listening to Perry speak and learning more about him through his stories, I was reminded of the motto of Write On, Door County: “Everyone has a story to tell.” Perry comes a small, rural community; he was raised on a farm; and he made it to the New York Times bestseller list by telling stories about that small community. He continually referred to himself and many of his compatriots from New Auburn, Wisconsin, as “roughneck knuckleheads,” but his stories were told with reverence and love lying just below the humor.

Everyone does have a story to tell, and sometimes the best stories are the ones that seem mundane or come from surprising places. It’s also clear that even though everyone has a story to tell, not everyone can tell it like Michael Perry does.