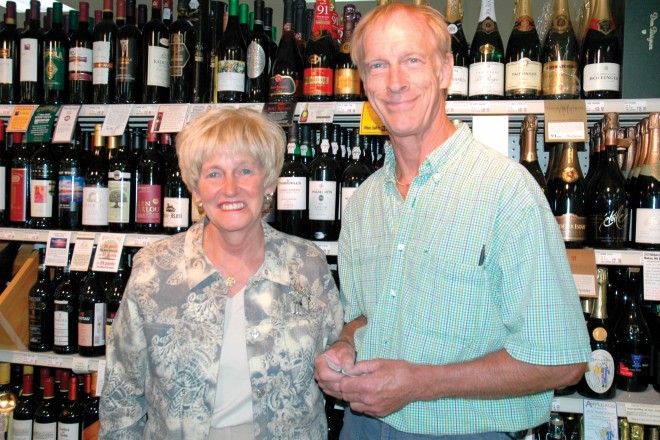 According to Dave, the Callsens’ four-point philosophy of business success is to “focus on customers, treat employees fairly, get involved in your community, and work your butt off.” Photo by Dan Eggert.

The basic story line is familiar: couple lives in Everytown Midwest, couple marries and has children, couple begins to wish they lived in their favorite vacation spot, couple moves to Door County and strikes up a business, thus realizing the dream of living here a decade or two before retirement would otherwise allow. For Main Street Market owners Dave and LaVonne (Vonnie) Callsen, though, that story line has more to its plot than the average read through. This couple, along with daughter and son-in-law Kaaren and Steve Northrop (also owners), have turned a venture with modest beginnings into a community pillar – one that can boast as much by way of business integrity as it does heart.

Those who know the Callsens will be quick to tell you about their welcoming nature. I, for one remember the second time I walked into Main Street Market, sometime in the late 1980s, and the city girl’s surprise I felt that Dave had remembered my name. I was only a visitor to the area then, so it wasn’t as though my first trip had been the day before; it was at least weeks, but probably months prior. Such is the case for many of Main Street Market’s customers – the experience, I’ve learned, is not uniquely mine.

Entering the market on a typical day, it’s not uncommon to see Dave, Vonnie or both up at the front checking out shoppers, filling grocery bags, chatting with customer-come-friends, answering the phone or attending to an odd detail. What is uncommon, however, is that they perform all of these activities (and many, many more) with a level of ease and unwavering friendliness that betrays the complexity of the market’s inner workings and the various challenges that are part and parcel with growing a business.

And grown it they have. The Callsens first opened the doors of Main Street Market in September of 1987, having earlier owned two grocery stores in Valders, Wisconsin for 14 years. At that time, it was a long drive between places in Door County one might go to load up on provisions – Sister Bay on the northern extreme and Sturgeon Bay on the southern extreme. “We saw that an opportunity and a need was here,” says Dave. “Choosing Egg Harbor made sense because it’s centrally located and we knew we wanted to be in Door County.”

That theory proved correct. In just four year’s time an addition was built, and a second addition came in 1997. Main Street Market now employs 35 to 40 full- and part-time employees – just in the winter – and the staff doubles in the summer. Such growth hasn’t translated to a decline in quality, however. On the contrary, the market has earned a reputation for the freshness of its deli, meats, and bakery, and a cleaner, better-kept supermarket you’d be hard pressed to find. That reputation, no doubt, can be attributed to the endless hours the Callsens and Northrops spend at the store. “At least two of the four of us are here all the time,” says Vonnie, while Dave adds, “We’re here seven days a week in the summer- it’d be nice to take a day off during the season, but it hasn’t happened yet!”

When asked to describe his “job” at the store, Dave says with a chuckle, “I do what no one else does. I basically just go where I’m needed most.” At my urging he reluctantly – humbly – begins to list off a few of the tasks that make up a day’s work: wine buying (which could be its own full-time job, judging from the preeminent wine department), buying for other departments, making “a million little decisions a day,” taking care of the machinery in the business, interacting with customers, keeping track of the store’s overall goals, and even changing the light bulbs, among other things.

Vonnie, also modest, begins to talk about her office work and bookkeeping, but interrupts herself to establish Kaaren and Steve’s central role in ensuring the store runs smoothly. Keeping the conversation on track, Dave again laughs and adds, “Vonnie is the store mother and social director.” Despite her smile, she verbally denies nothing and instead tells me about organizing employee get-togethers and Christmas parties while handing me a copy of her weekly in-store newsletter, a lighthearted amalgamation of quotes, humorous anecdotes and a generous employee discount coupon. “We work hard together,” she says, “but we have a lot of fun times, too.”

Having walked through the labyrinth of the store’s back room on my way to the Callsen’s office for the interview, I’m able to fill in the blanks about the rest of the many, many things that occupy the time. Piles of boxes fresh off the truck line the walls and I see employees tucked in side rooms cheerily going about their work – it’s clear from the bustle there’s much to be done.

In the back office, as we talk over the compressors loudly droning away in an adjacent room, I pick up on the Callsen’s inspiring ability to multitask. The store’s intercom intermittently clicks in and out, each time causing Dave and Vonnie’s ears to prick up. Somehow, they manage the mental juggling act of speaking to me in full sentences while unassumingly making mental notes of which sales rep is waiting in which department, which seasonal customer is politely waiting to put in their annual springtime “Hello, we’re back!” and generally minding the rhythm and pace of the store as told through the intercom.

In addition to running the Main Street Market with grace and skill, the Callsens also deserve a nod for creating a business that in many ways is the year-round backbone of Egg Harbor. “People depend on us and that’s a great feeling -an awesome feeling sometimes,” says Dave. “We provide for people’s needs, but people also treat the market as an information center and even as a social center. Some will even call &om out of town to ask what the weather’s like or whether their road’s been plowed.” Vonnie adds, “For a long time we’ve used the motto ‘We support the community that supports us.’ We live by that. We really feel it’s a privilege to live in this community. All four of us are involved in various boards and Steve coaches, too.”

The Callsens appear to have enhanced their success with just that attitude, especially when compared to the current business climate of large chains and corporate domination. “People have the mindset that chain stores are less expensive, have more product and are better,” says Vonnie, to which Dave adds, “There’s a certain amount of truth to that with some products, but you can create a much better shopping experience as an independent. You can respond better and adapt. Corporations micromanage from a distance, but we’re not obliged to anybody else. The grocery store business is ever changing and being right here helps us understand the community’s needs better.”

What the next chapter will bring for the Callsens remains to be seen, but given their track record of exceptional business leadership and community commitment, future success seems a good bet. “The goal is to reduce our hours as we go on here,” says Dave. In the meantime, though, the Callsens will surely continue to provide a noble example for other business owners to follow.