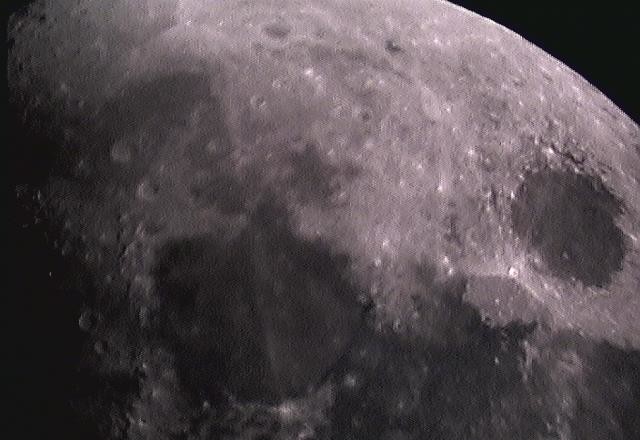 The first picture of the moon taken with the Leif Everson Observatory’s new MallinCam video camera.

If you have been following the news recently you know that these are exciting days for planetary scientists and astronomers. Late last year the NASA New Horizons mission did a fly-by of Pluto and is still transmitting data and pictures. The initial data and information surprised planetary scientists as the first close-up pictures of the dwarf planet were well beyond expectations.

Most recently you may have read that Cal Tech researchers have found evidence of another planet in our solar system. The new planet (named Planet 9 for now) is estimated to be 10 times the mass of earth and is 20 times further than Neptune. This planet is 5,000 times the size of Pluto and is clearly gravitationally affecting the neighborhood. Planet 9 is estimated to take between 10,000 and 20,000 years to orbit the sun. In contrast to Earth’s 365 days, Jupiter takes 11.86 years, Saturn 29.46 years, Neptune 164.79 years and 248 years for Pluto!

The researchers Mike Brown and Konstantin Batygin were quoted to be skeptical about the possibility of another planet but became convinced as they worked through models and observations of what is occurring in the outer solar system to the orbits of a number of bodies in the Kuiper Belt.

While Planet 9 has not been directly observed, astronomers are looking for evidence in existing sky surveys and will be searching the skies.

Another recent astronomical discovery that made the news is the observation of gravitational waves. These waves were theorized by Einstein in 1916 and are “ripples” in the fabric of space-time. Gravity waves are created by violent and energetic events such as collisions of black holes, exploding stars (supernovae), or the coming together of neutron or white dwarf stars. 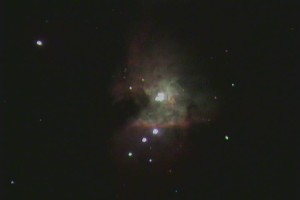 What makes gravitational waves so important is that it gives astronomers a new way to view the universe. Astronomers for years have used telescopes, viewing the universe with different parts of the electromagnetic spectrum. The spectrum includes radio waves, microwaves, infrared, x-rays, gamma rays and visible light (a narrow band in the spectrum) to study the universe. Gravitational waves are not part of the spectrum and will provide new information and a completely new way to observe and study the cosmos.

Closer to home here in Sturgeon Bay at the Leif Everson Observatory, we’re excited to be using our MallinCam video camera on the observatory telescope. The camera allows us to view objects on a monitor in the observatory, providing a more detailed view. The first pictures taken, on one of the few clear nights we’ve had this winter, were of the Orion Nebulae. We’ve also attached it briefly to our solar telescope to get some images of the sun. In the next few weeks we will be refining the settings and will be sharing them with visitors on our viewing nights.

The next public viewing is scheduled for the evening of March 5. Our March general meeting is March 1 at 7 pm. David Lenius will present the “Viewing Target of the Month” and the main program will be “How the Earth Moves,” a video lecture by Carolin Crawford of Gresham College.