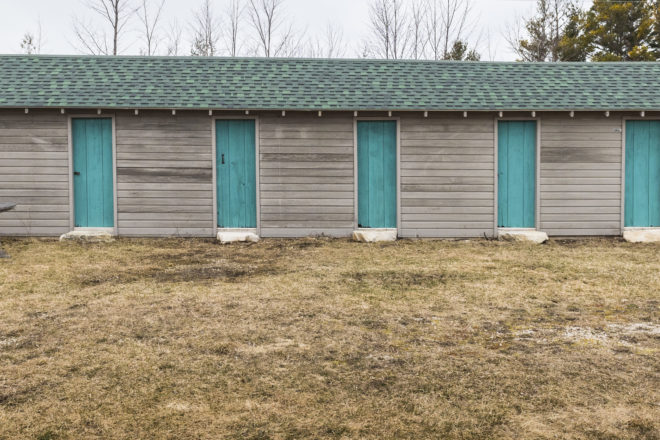 A 1940s-era migrant pickers shack near Ephraim has been given new life at the hands of Door County summer residents Paul Heim and Julie Watkins. The restoration of the building on Town Line and German roads near Ephraim toed the line between tradition and whimsy. Photos by Len Villano.

Paul Heim and his wife Julie Watkins would agree with Ralph Waldo Emerson’s observation, “If eyes were made for seeing, then beauty is its own excuse for being.” The restoration of the migrant pickers shack on their property has been a labor of love.

Heim, a native of Wisconsin, now lives in Houston, where, until retirement, he worked as an attorney for Exxon Mobil Corporation. One of his clients was the present Secretary of State Rex Tillerson. In 2012 Heim and his wife attended his family’s reunion in Door County, and subsequently purchased a cottage built in 1941 on Settlement Road near Ephraim for influential Door County businessman and artist Francis Hardy (for whom the Hardy Gallery is named).

Fuzzy Sunstrom’s father had worked on the cottage, and when Sunstrom learned that Heim’s wife loved sunflowers, he offered her as many as she cared to pick from his field of them.

The seed for a second purchase of real estate was planted. 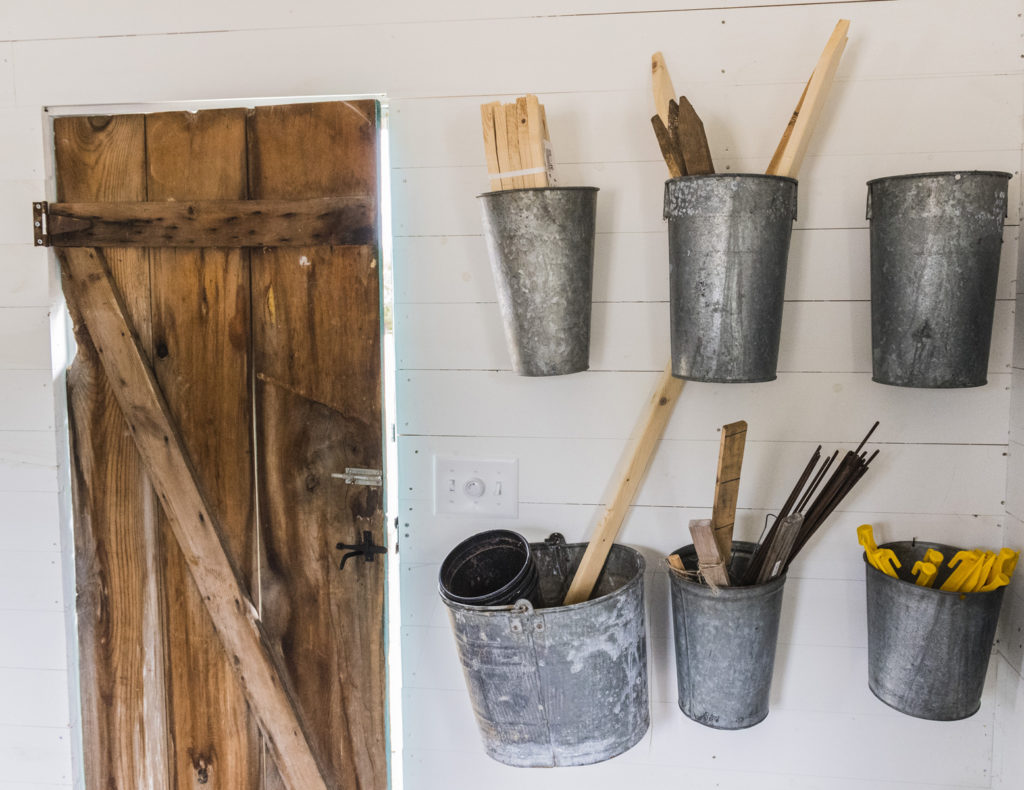 An eight-and-a-half acre piece of property at the corner of Town Line and German roads, not far from Heim’s summer home, came on the market. On the piece of land were an old migrant worker dormitory and outbuildings. In 2014 he bought the property and began the process of reclaiming the land and restoring the buildings.

“People had used the property as a dump,” Heim said. “I had hoped to find a sack with a million dollars in it but that didn’t occur!”

Because the acreage was once the site of an orchard, earth contamination from chemicals was a concern but soil tests reassured him. And Heim planted sunflowers.

“The land was an excuse to buy a tractor,” he said. “And then I built a barn to store the tractor and other things.

“I cleared out junipers and put in raised beds,” he continued. In addition to planting vegetables, he set out 33 assorted fruit trees, planted raspberries and strawberries, and sowed naturalized wildflower seeds to supplement the sweet peas that return every year.

This past summer, because of the abundance of his garden produce, Heim and his wife set up a stand along the road offering free vegetables to passersby. They placed on it a can for donations to the Door County Humane Society, and at season’s end, had collected $401.

The migrant dormitory was built in a traditional shotgun style, a structure 10 feet wide and 60 feet long subdivided into seven primitive rooms. A building that now houses Door County Wildwood Market on Highway 42 between Sister Bay and Ellison Bay served as an inspiration for the couple as they developed their plan.

“The basic bones of the building were pretty good,” Heim said. Timber Wolf Builders took on the project, while his wife kept an eye on progress.

The restoration involved pouring new cement over the deteriorated slab, re-shingling the roof, lining the interior with shiplap, and replacing windows. Most of the original doors were retained as was the exterior siding.

Because his wife is an accomplished professional interior designer, Heim said, he deferred to her tastes in the restoration process. As she is committed to maintaining the integrity of the structure, the outside appearance of the building has essentially been retained. They debated whether to repaint, but because the siding was well cured, they decided to use a stain to help preserve it. 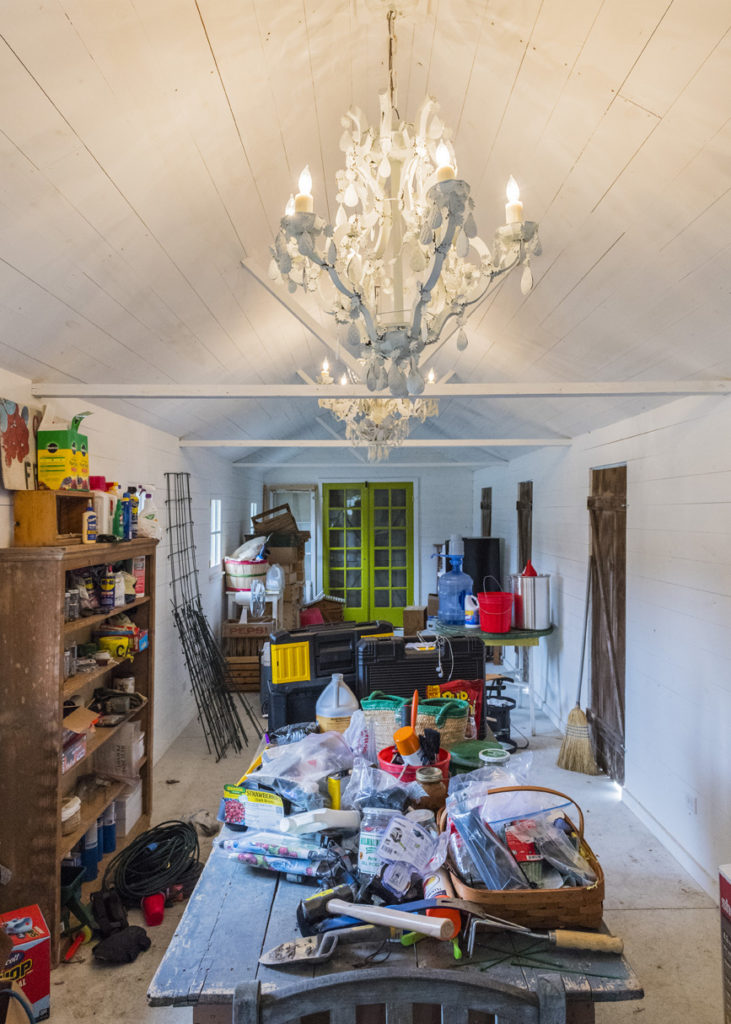 While the couple retained most of the building’s original features — its doors and exterior siding — they also added a few fanciful touches, including yellow-green window trim, aqua doors and two chandeliers to what is now their garden shed.

One of the changes was designed for function, the last room opened up to create a porch. Some were for aesthetics, for instance, a yellow-green trim for windows and an aqua for doors.

“Two casual chandeliers are fancier light fixtures than you would have in a garden shed,” Heim said, admitting the whimsy in some of the choices.

Because the original garage sat on bare earth, the building was temporarily moved, a cement slab poured and then the structure returned to its original location. It will serve as a garden shed.

One feature of the property that Heim has maintained is a split rail fence, formerly in disrepair. Now, it’s not only refurbished but also extended by a neighbor who worked for him. The fence, especially with the naturalized wildflowers and Heim’s four beehives, adds to the rustic ambiance of the property.

People driving by stop to admire the setting. Door County plein air artists set up their easels, professional photographers shoot landscapes, and even a family gathered for a reunion in Door County asked if they could pose for their photos on the property. 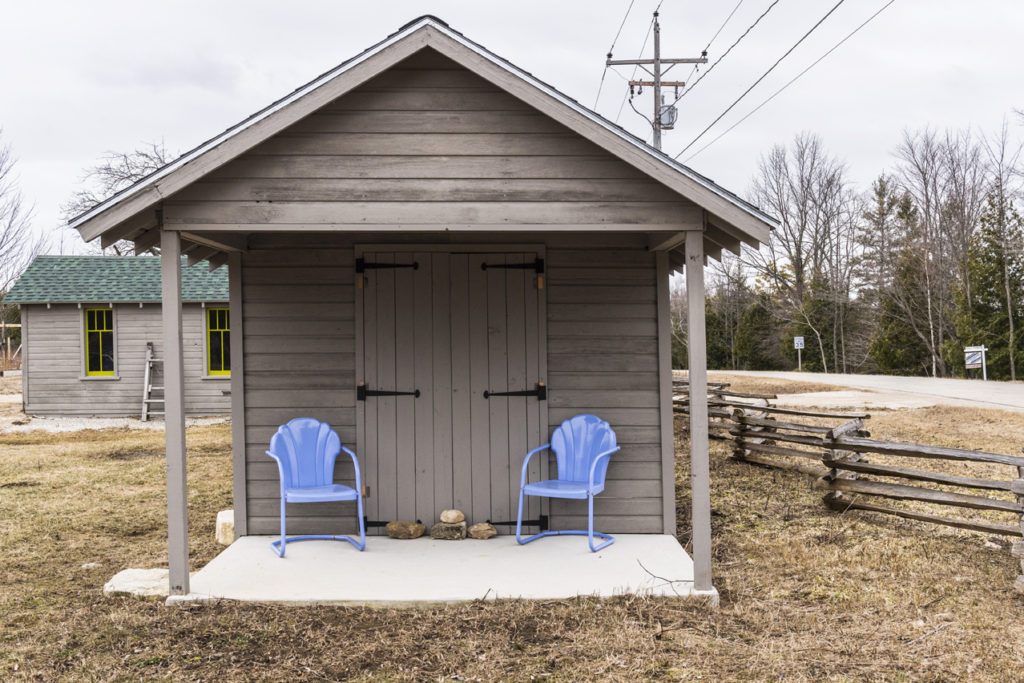 “We did it [the restoration] to preserve it,” he explained, “to have something nice. We couldn’t justify it on a cost analysis basis.”

Sometimes beauty is its own excuse for being.

And the project continues, Heim deferring to Watkins’ interest in history and commitment to aesthetics. They learn by doing, Heim rediscovering the joy of gardening that he had experienced as a boy but also realizing that a fence was necessary to protect his labors from wild critters. And Watkins is planning a perennial garden for this coming summer.

Now that he is retired, Heim finds “Door County such a blessing, a perfect place, recreation, beauty, theater, music. Friends come up from Texas,” he said, “and they get blown away!”