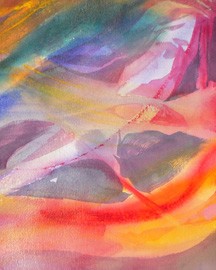 Mother and daughter duo Suzanne and Patricia Crow will exhibit their watercolors at the UU Gallery for the month of December. An opening reception will be held Dec. 2 from 5 – 7 pm. The public is invited.

Suzanne began taking art instruction in the ‘50s with a correspondence course in illustration. While raising her four children, she free-lanced decorative certificates commemorating birth announcements. She worked in Pennsylvania Dutch motifs, influenced by the location where she lived.

After numerous visual art classes in high school and college, Patricia’s art focus turned to the performing arts, first acting in community theater productions and then working as executive director of a community arts center. While developing visual arts programming for the arts center, Patricia continued her studies in art.

Suzanne and Patricia have been taking art classes together since the early ‘70s Suzanne moved to Door County in 1999 while Patricia arrived in 2008. Local teachers have had an influence on their art, including Ed Fennendael, Jan Forkert, and Marianne Diekman. Patricia’s latest interest is in large-scale watercolors influenced by Michael Ireland. Many of her pieces in the exhibit were created in a June 2011 workshop at the Peninsula School of Art.