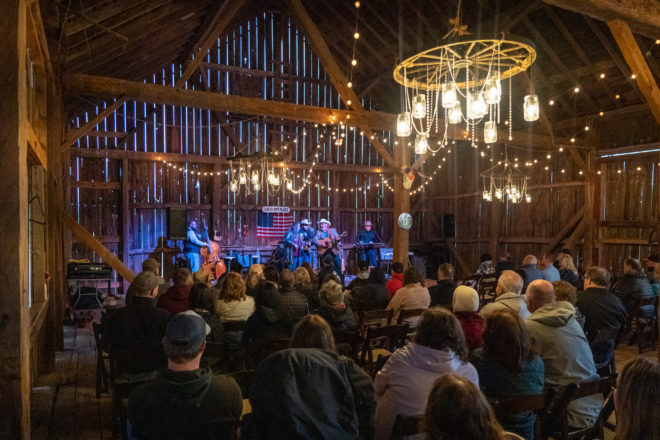 Longtime friend and adopted family member Steve Nothem introduced Dan Rass after Rass had introduced the others. “Dan made all this,” Nothem said. “Took an old barn full of hay and made this.”

The first thing that surprised me was the horses. Two of them were saddled and waiting at the end of the driveway as I pulled into The Fiddler’s Farm outside Sturgeon Bay. I was even more surprised when one of the horses and the woman riding it guided me to my parking space, trotting along in front of my car, directing me to the next open area in the grass field.

After stepping out of my car and spraying myself with a good deal of bug spray, I walked trepidatiously toward the barn. I was skeptical about the evening and whether I’d enjoy myself. Country, bluegrass and Western swing are not my music genres of choice, so I thought my meal from the on-site Goyitto’s Taco Truck would be the highlight of my night.

The second thing that surprised me was the barn. At 118 years old, it doesn’t look its age. Some boards are uneven, and the walls aren’t weather tight. But on a mild summer night, the burgeoning sunset made the cracks in the walls seem intentional, highlighting the floor and chairs with streaks of gold.

Chandeliers made from wagon wheels – and lit by Mason-jar lights – hung from the ceiling, and strings of bulbs laced through the ceiling beams. A horned skull with pink flowers on its forehead peered at the crowd from its hanging place on a post.

The concert was scheduled to start at 7 pm, but the grounds opened at 5:30, followed by the doors at 6. Concertgoers – primarily couples and a few young families – trickled in throughout the hour. And when they entered, almost everyone went to an open window that looked out over the field at the back of the barn. A metal triangle and beater hung in the center of it, and a few people made sure it still worked.

About 60 people filled the 100 chairs in the barn when The Fiddler’s Farm Band took the stage. Though the members sometimes rotate, it’s a six-part band: guitar, fiddle, bass, drums, dobro and console steel guitar, and mandolin. Four of the band members sing as well.

Band leader Dan Rass did most of the talking.

“Who all’s here for the first time?”

More than half the hands went up.

Behind the stage is a sign that says, “Our Happy Place,” with an American flag below it and fiddles flanking it on both sides.

Dan and Teri Rass – bass guitarist and Dan’s wife – said the sign represents how they feel about the venue they created out of an old barn. When they perform, though, the sign refers to everyone who’s lucky enough to be in attendance.

The third thing that surprised me was that I smiled nearly all night. I’m not a country-music expert, but I can tell you that I felt happy. I felt free.

In addition to the skilled musicianship and vocal talents, the easy talking, laughter and set-list changes happening on stage made it feel like the family affair that it was. (Four of the six band members are actually family, and Dan referred to the other two as “adopted members.”)

The clear air, marred only by an undertone of barn wood and bug spray, with dust particles and cotton spinning through it, spoke of nostalgia and simplicity. Kids played in the back of the barn; a couple danced during Merle Haggard’s “Silver Wings”; and Steve Nothem, the dobro player, made jokes throughout the evening.

As the night wound down and the chandeliers became necessary rather than decorative, the barn felt smaller than when I had first stepped inside. Before the last song, when Hana Dumas proved why she’s the two-time Wisconsin state fiddle champion, Dan turned to the crowd and said, “Doing it for you, folks, is what makes it fun.”

If you haven’t experienced The Fiddler’s Farm – or even if you have – an evening there will win you over. The farm, at 6951 Cty C in Sturgeon Bay, hosts performances every Saturday night and matinees on holiday Sundays. Get tickets and more information at thefiddlersfarm.com.