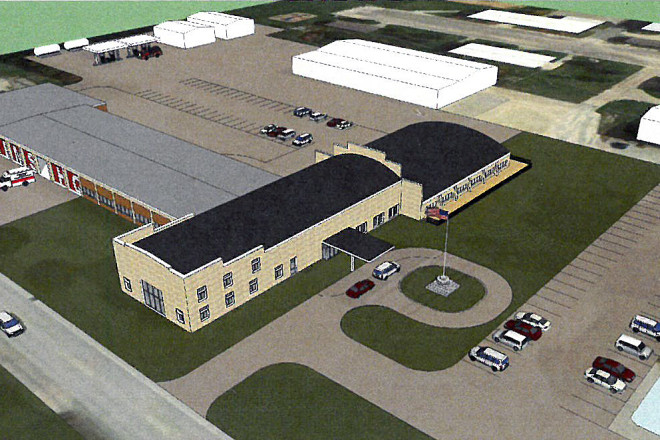 Thirteen members of the Door County Board of Supervisors heard a presentation on how the old highway shop on 14th Avenue in Sturgeon Bay can be rehabbed and turned into an exemplary senior center and EMS headquarters.

The occasion was the Feb. 1 Property Committee, where two members of Venture Architects of Milwaukee (John Cain and Steven Schneider), Chad Holland, a representative from Paul Davis Restoration of Milwaukee, and Paul Martzke, a representative from Immel Construction of Green Bay, presented the committee with cleanup plans and a conceptual design for the project, which was summed up by committee member Richard Haines: “We’re essentially trying to turn a garage into a living room.”

The original architectural concept was presented to the committee last month, with the idea that the committee would then forward the idea on to the full county board. However, several committee members were worried that after years of soaking up noxious odors, the porous material inside the former garage could not be made livable.

That’s when John Cain of Venture Architects agreed to bring someone from Paul Davis Restoration to the next committee meeting. County supervisors were told of the presentation when the full board met on Jan. 26, and supervisors were advised to attend the Feb. 1 meeting to learn more about the plans so they would be better informed when it is brought before them. That’s why seven board members not on the Property Committee showed up (county board chair Dan Austad, Helen Bacon, Roy Englebert, Susan Kohout, John Neinas, Paul Kok and Kathy Schultz).

Chad Holland of Paul Davis Restoration explained how the company resolves noxious odor issues, as it did after the $7.5 million spontaneous combustion fire suffered in the gym of Green Bay’s Preble High School in August 2014.

“There was zero odor whatsoever,” Holland said. “They couldn’t have been happier.”

After mentioning that his company has worked for some very exacting residential owners, specifically mentioning working on the home of Pierce Brosnan and his wife Keely Shaye Smith after a fire, Holland said of the Door County project, “I’m confident it’s easier than other projects we’ve done.”

Holland said he has inspected the wooden arches inside the building. They are coated with years of exhaust and grime that make them look like they were painted black, but underneath there is a beautiful light-colored wood that could be restored with a process called soda blasting, which uses baking soda to clean and deodorize the wood.

“It was exciting when I walked into that room to see the large beams,” Holland said. “It’s really going to look amazing after it’s soda blasted.”

The rehabbed beams would then be stained and sealed, a process that would eliminate any noxious odors except for the short-lived smell of the stain and sealant.

“I don’t see a problem at all with lingering odor,” Holland said.

Martzke of Immel pointed out to the committee that the cost of the clean-up was included in the original budget provided to the committee at the January meeting, a budget that came to almost $500,000 less than it would take to build two new separate buildings – $9,626,040 compared to $9,216,889.

“We haven’t changed anything since we sat before you several weeks ago,” Martzke said.

He explained that the plan calls for removing all of the concrete slab now in the building, removing up to 24 inches of soil, if needed, pouring new concrete and installing a vapor barrier to prevent moisture from seeping up through the slab.

“We went above and beyond what we would normally put in. Six mil is normal,” Martzke said. “We budgeted for a 15 mil vapor barrier. It doesn’t allow any vapor transmission.”

The amount of soil that has to be removed will be determined through soil testing that is scheduled to take place Feb. 8 and 9.

Next up was Steven Schneider of Venture Architects, who provided the committee with a virtual tour of the conceptual design for the EMS headquarters, senior center and the Aging and Disability Resource Center, which takes advantage of Door County stones that were used in the original building and keeping “the material palette simple.”

After hearing the presentation, Door County Board Chair Dan Austad said he was “very impressed” and would hate to see the committee recommend tearing down the old building.

Committee member Ken Fisher said all the committee has at the moment are “pretty pictures.” He said the committee needs to know how contaminated the soil underneath the building is before proceeding.

Austad said the committee won’t know those numbers until the next step in the process, and that this step was to either recommend or not the plan to the full board.

Martzke said the budget provided allows for the worst-case scenario – that the Department of Natural Resources would require that two feet of contaminated soil be removed from the entire building.

“We should be able to handle or mitigate that issue,” he said.

“Under no circumstances are we going to be told to take out more than two feet,” Fisher asked. “You’re saying there’s no way?”

“I don’t want to open a can of worms for the taxpayers of Door County,” Fisher said.

Corporation Counsel Grant Thomas said the scheduled borings could prove that the site is a lot more contaminated than expected, “but common sense says it is not,” he said.

Pabich said the committee had a couple of options – either to take a cautious approach and wait until the environmental testing results come back, or work concurrently on the testing and advancing the project to the county board. Several members pointed out that sending the proposal on to the full board did not represent final commitment to the project.

Joe Krebsbach, head of Door County Human Services Dept., said the proposal fits what they had hoped for the senior center.

“To me it’s a pretty exciting opportunity,” he said.

The committee asked the foursome if they could give their presentation to the full board at its Feb. 23 meeting. Cain suggested that he and his colleague Schneider could handle that, although Martzke said he too would attend.

The committee voted to move the project on to the full board.