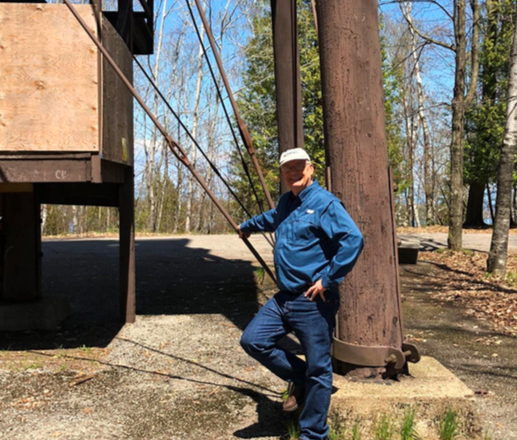 An expert on timber says that Potawatomi Tower can be repaired to serve another 90 years for an equal or lesser cost than reconstructing or tearing it down. And repair could be completed in as little as 10 days, according to Dan Tingley of Wood Research & Development, a firm in Jefferson, Oregon.

The Sturgeon Bay Historical Society (SBHS) commissioned Tingley to inspect the tower, and he presented his findings on May 14, giving hope to those who want to save it.

Last spring, the Department of Natural Resources declared the Potawatomi State Park observation tower unsafe due to significant wood decay and movement in its structural and nonstructural components. With the help of the USDA Forest Service’s Forest Products Laboratory in Madison, it was determined that the tower should be dismantled because repair was out of the question.

However, the DNR has been committed to letting the tower stand until it conducts a third study, said Michael Bergum, DNR spokesperson for the tower’s progression. The DNR is looking to an outside engineering firm to determine which direction to take and is sending out requests for proposals.

The SBHS is also wrestling with ADA-compliance requirements and whether compliance is needed when repairing or replacing historical structures. Bergum says they are.

Tingley’s introduction included an emphasis on technologies of the past 20 years – such as kevlar carbon fiber wraps (five times the strength of steel) – that increase capacity and make wood preservation and repair possible.

A nondestructive device called a stress-wave timer determines these measurements by finding stress points and decay in the timber. The longer it takes for compression waves to reach one side of the column from the other when the column is hit with a hammer, the more decay is present.

Weather, animals and vegetation can contribute to decay, as can structural factors such as tarring and painting because those substances lock moisture in the timber, and decay happens from within. This does not happen with staining the wood.

Despite the grim tone, Tingley said 80 to 90 percent of the tower is still good, with few stress points, and the center column has no decay. He believes the problem areas can be made structurally sound.

Restoration to provide stability would cost $100,000, and full tower restoration, including diffusing and staining, would run $250,000.

According to Tingley, tearing it down would require a large work area, but repairing it has a small workspace footprint, which reduces the potential for erosion and vegetation damage.

Tingley and the SBHS agree that extending the tower’s life and maintaining its heritage are the motivating factors in repairing it.