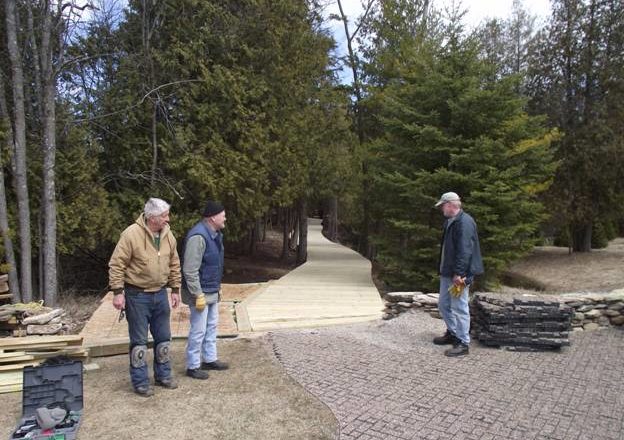 The Hidden Brook Boardwalk extends from the new visitor’s center to the old boardwalk between the upper and lower range lights on The Ridges campus. Photo by Ed Miller.

As The Ridges Sanctuary approaches the one-year anniversary of its new Cook-Albert Fuller Center, it is preparing for the realization of another dream conceived many years ago: a universally accessible boardwalk.

Since last fall, a crew with Peil Construction and volunteers with The Ridges have logged more than 1,200 hours assembling, transporting and installing the 1,800-foot boardwalk, which extends from the Cook-Albert Fuller Center to the original boardwalk between the range lights. 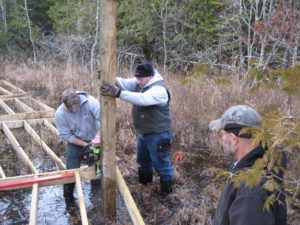 It was inspired by the late Lee Traven, a Baileys Harbor native and dedicated Ridges volunteer whose mother was instrumental in founding the sanctuary. An active retiree, health issues eventually prevented Traven from walking the rustic trails and when The Ridges began creating an Interpretive Master Plan in 2010, one of its priorities was to increase accessibility.

“In these rustic trails, we’ve got tree roots and everything else and he just couldn’t get out anymore,” said Steve Leonard, The Ridges Executive Director. “That vision – if we’re putting in a trail, we’re putting in a boardwalk – we stuck to our guns on it.”

The boardwalk meanders between ridges and swales in what The Ridges land manager, Brian Forest, calls the sanctuary’s “living laboratory.” Winding through a critical wetland habitat, the Hidden Brook Boardwalk steeps visitors in the sanctuary’s restoration and protection of orchids, dwarf lake iris and the Hine’s emerald dragonfly.

Over the course of three years, The Ridges collaborated with the U.S. Fish & Wildlife Department, the U.S. Corps of Engineers, Wisconsin Department of Natural Resources, the Town of Baileys Harbor, and county departments to ensure minimal impact in sensitive areas. 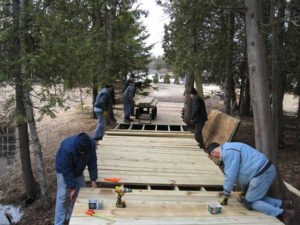 Construction on the Hidden Brook Boardwalk. Photo by Ed Miller.

“We had to survey everything and say, this is the minimal impact,” Leonard said. “But the greater impact is the education and getting people out there.”

Evidence of the permitting process remains along the boardwalk as an educational component.

“All those white and blue flags in there, we left them in there just for conversation,” Forest said. “Those are crayfish burrows. The Hine’s emerald dragonfly larvae use crayfish burrows to get in there and get down below the frost line. They’ll live four or five years in there if the crayfish don’t eat them.

“They had grad students out here poking in the muck looking for crayfish burrows,” he added. “We had to stay away from those areas with the boardwalk and because we’re crossing this pretty active area, they wanted us to go to a six-foot wide boardwalk there. Less of a footprint. Less of an impact.”

By the end of the month, the final piece of the boardwalk will be placed – a covered bridge extending over Hidden Brook. The bridge, along with future plans for three overlooks, bump-outs with seating, and possible interpretive panels, was made possible by a $100,000 donation from Mequon, Wisconsin resident Marsha Krueger. 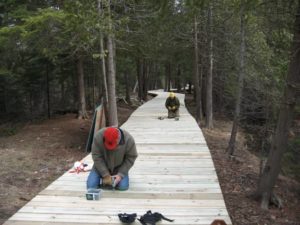 Installing the board walk. Photo by Ed Miller.

It was a gift born out of a love of nature and desire to share it with people of all physical abilities.

“The woman who gave us this gift, she’s terminally ill, and as she’s reached these stages of her life, accessibility has become really important to her,” Forest said. “That was one of the driving forces. She wanted to write a check for $100,000 just because she enjoys coming here and she recognized that need to get people out here. This is all going to be ADA compliant when it’s done.”