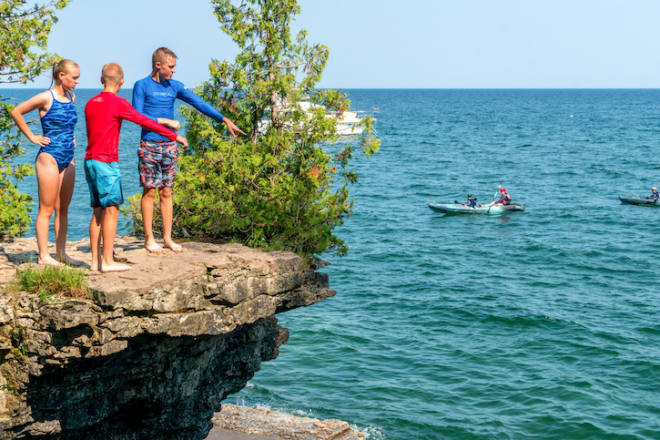 A sunny day might look like summer paradise at Cave Point, but conditions change rapidly when a storm moves in. Photo by Rachel Lukas.

Whether you’re kayaking along the shoreline or hiking on the trails and rocks, it’s crucial to consider safety when adventuring on or near the water at Cave Point County Park.

The county park in Sevastopol attracts swarms of visitors each year because of its fascinating topographical features, but those same features can also be very dangerous. Bluffs, cliffs, ledges, strong currents, high waves, riptides, water depth, water temperature, and difficult access to the water are all factors that contribute to the danger, according to Burke Pinney, manager of Door County Parks.

Aaron LeClair of Door County Emergency Services concurred. “First and foremost is the height [of the rock cliffs],” he said. “Secondarily is the varying water depths with the waves.”

That’s why officials at these two agencies strongly advise against jumping into the water, swimming, or walking on the slippery rocks at Cave Point.

“Door County does not sanction swimming or jumping off the cliffs at Cave Point,” said Pinney, who emphasized using common sense.

Compared to a few feet out into the lake, it’s considerably more shallow and current-heavy in the horseshoe-shaped cliff opening where most visitors who are intent on jumping take their leaps into the water. Overall water levels remain fairly high this year, but the number of people jumping has increased as tourism continues to return.

Door County Emergency Services receives six to eight calls each year to rescue people who have jumped from or fallen off the rock cliffs.

Those who are already in the water as kayakers must also focus on safety.

“I think you really get a better appreciation for wind and wave out here,” said Ryan Moore, who, along with Isaac Quinones, is a kayak guide for Door County Adventure Center. They spend up to six hours a day leading tours at Cave Point, plus more in their free time.

Moore and Quinones jump and climb with an understanding of the risk involved, so they never visit the park alone, and they swim only when the weather is ideal.

“Our boss describes it as a popular cliff-diving spot, but also a popular spot to break your legs,” Moore said.

“It definitely feels a lot bigger when you’re in [the cliff opening] rather than just looking at it,” Quinones said.

“The biggest thing that catches people off guard is the currents,” LeClair said. “Don’t jump off [the rocks.] It’s very dangerous and not recommended.”

Just a few weeks ago, Door County Emergency Services received calls for a person who had been injured while jumping off the rock cliffs and for kayakers who had tipped over. LeClair said his department had previously received 15 calls per year for kayak rescues, but that number has decreased as kayak companies have bolstered their safety standards for Cave Point tours.

He recommends that kayakers stay in their kayaks, listen to their tour guides and never paddle at Cave Point on their own. Hikers should stay on the trails, remain vigilant in looking for tree roots and rocks, and avoid seaweed-covered or wet rocks along the shoreline. In inclement weather, it’s best to stay off the rocks entirely.

Todd Haleen at Lakeshore Adventures said water temperature is the first thing he considers because in the event of an emergency, a person cannot remain in cold water for very long. His second consideration is wind direction: A westerly wind at Cave Point is the most protective. Lakeshore Adventures even cancels tours there when strong winds are coming from other directions. Instead, they reschedule for a different location or day.

Haleen said that bright colors on paddles, life jackets and clothing are helpful so that other boaters can see you, and wearing a life jacket is a must. Other recommended supplies include a cell phone, first-aid kit, drinking water and layered clothing. Tour guides from Lakeshore Adventures always carry marine-band radios in case they need to contact the Coast Guard.

Inexperienced kayakers should consider how much endurance a long outing requires.

“You should paddle into the wind when you start,” Haleen said. “Downwind is easy, so save that to turn around and head back.”

If you do want to swim during a visit to Cave Point County Park, use the second beach access at Whitefish Dunes State Park, which is just a short walk away.