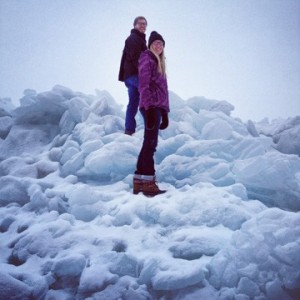 “I feel like I’m in Iron Will!” says my sister Tracy, exhaling wisps of steam, carefully finding her footing as she climbs up blocks of a jagged staircase of snow-covered ice. An expanse of white and blue spreads before and above us at Door Bluff Headlands Park near Ellison Bay and though the 1994 adventure film Iron Will is about a young man dog-sledding for weeks through the Canadian wilderness in 1917 – I guess I see some similarities: it’s white, it’s cold, it’s a bit dangerous, it’s beautiful.

“I feel like I’m an explorer,” says Tracy’s finance, Justin, standing stoically atop the pile of ice shoves with a walking stick in hand. Seems a bit more of a realistic comparison.

“I feel like I’m climbing Mount Everest,” I chime in, then decided that’s ridiculous. Everest is rocky and bleak and awful and littered with dead bodies. “Never mind.” 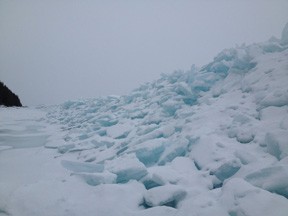 Ice shoves stack up along the shore. Photo by Sally Slattery.

We navigate over the shoves, glinting a blue as turquoise as the Caribbean Sea in the right light, catch sight of ice shanties in the distance, four-wheelers and snowmobilers flying across the frozen lake. Do they realize how wildly amazing and beautiful these heaps of ice are? I’ll admit – I’ve never seen anything like them and I grew up in the land of 10,000 lakes.

This natural phenomenon takes place along the shores of the Great Lakes, sometimes threatening structures and homes. They are caused by water currents, strong winds, temperature changes. Piles can reach more than 40 feet high; they can creak and rumble like an oncoming train or thunderstorm while lifting and cracking the rocks beneath them. They are powerful, epic. I love me a good pile of ice shoves.

Before I get a lawsuit thrown my way, I recommend you practice extreme caution should you decide to climb the shoves! They are best appreciated from a safe distance.