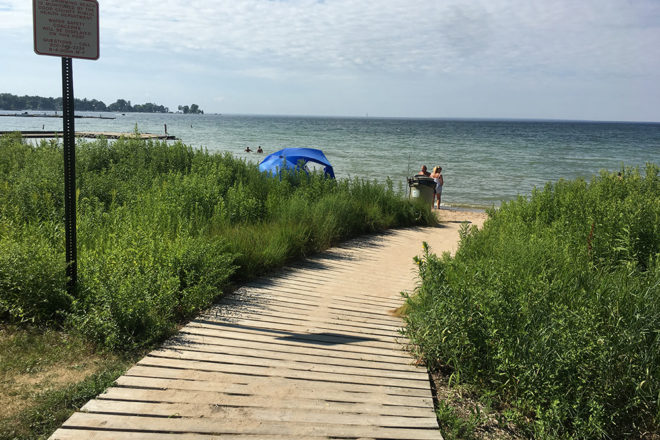 Welcome to the dog days of summer, when the heat may have us secretly (or not so secretly) longing for autumn’s cooler temps while we’re still trying to soak up as much fun in the sun as we can before the seasons shift. If you’re looking to pack a few more beach days into your summer plans, this second installment in our Door County beach roundup has you covered, from picnics to sunsets and other activities in between.

Tucked behind Bridgeport Resort on the city’s west side, the beach at Otumba is smaller than some, but it’s the only one with a Mobi-Mat: a plastic walkway that helps people with wheelchairs or walkers to access the water from the concrete sidewalk.

The city made major upgrades to the beach last year after high waters damaged the shoreline. If you’re looking for a daylong beach hangout, Otumba has some of the best facilities for eating and grilling, with about 10 campsite grills, a large shelter with a dozen or so picnic tables, and more tables scattered throughout the park. Additionally, the park connects to benches and the water walkway in Sturgeon Bay, which offers tennis courts, a basketball court, beach volleyball and several playgrounds and swing sets.

Quiet in the Sun: Haines Beach Near Little Sturgeon

Want to get away from it all for a little while? Haines Beach is a good choice. It sits about 15 minutes south of Sturgeon Bay, tucked into Rileys Bay. With a decent-sized public-beach area, a large swath of shallow water and a small picnic area in the forest, it’s a nice getaway from the usually people-packed beachfronts elsewhere in Door County.

The beach is all sand, with a small grass area between the beach and the boardwalk path that follows it. Anyone with accessibility concerns should know the parking lot is about 100 feet from the beach, over an uneven boardwalk path.

But, because of its location and with private land on both sides, it’s peaceful. Most people during a recent visit were using the beach to soak up some sun or chat with their friends and family next to a speaker and an open beer.

Whitefish and Newport’s Europe Bay Beach share the title for longest continuous beaches at 1.5 miles each, but Newport also has dozens of smaller sandy nooks scattered along its coastline.

Designated as a wilderness park, the beaches at Newport State Park offer few amenities but plenty of beauty, making it worth the trek north. Pack your snacks and beverages, as there aren’t places to grab them near the beach. With little motorized boat traffic in the area, kayaks, paddleboards and other people-powered watercraft get along nicely at the various beaches. There are two main ports – one in Newport Bay and the other in Europe Bay.

Because Newport is known for its hiking trails, its beaches also make for good walks. The breeze off Lake Michigan keeps the area cool on hotter days, and the views are splendid companions while taking in the park.

If beach sunsets are what you’re after, Egg Harbor offers great color over the bay, even if the sun often ducks behind the point. Once just a postage stamp of sand, the village has expanded the beach through major property purchases and improvements three times in the last 15 years. Improvements in 2020 brought new accessibility to the water for those in wheelchairs, more sand, and stone seating areas.

Kids love the long sand expanse, and boats love to tie up beyond the swimming area. There’s grass for playing games, a playground, gazebo and picnic tables, and great views. Plus, kayak and paddleboard rentals on the beach give you an easy way to tour the shoreline of the harbor.

A favorite of local families, the Ellison Bay beach offers a small sandy area but plenty of amenities. Kids love the swings, playground and slides and plenty of grass to run in. Visitors will also find tennis courts, a large gazebo, plenty of beach and grass space, and a beautiful flower garden. The community center is also available to rent for events such as family reunions and weddings.