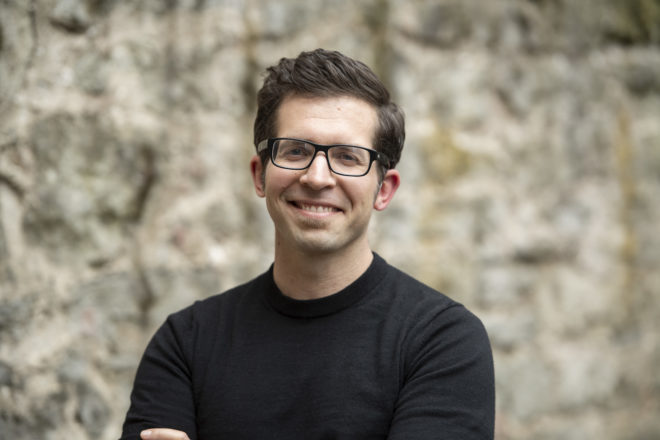 If Andrew Graff had followed the other professions he’d tried, no one would be reading his debut novel, Raft of Stars. But he didn’t, to the benefit of all who have read and will read his book. That includes readers up and down the peninsula who will participate in the 2023 edition of Door County Reads, which has selected Graff’s book as its focus.

The path leading to the publication of Raft of Stars may be atypical. The Wisconsin-born Graff enlisted in the Air Force as a jet mechanic, did a tour of duty in Afghanistan and studied to become a paramedic after he left the military. But instead of completing that training, he applied to Lawrence University, where he studied creative writing.

His undergrad thesis, which he took to his MFA program at the Iowa Writers’ Workshop, was a book about his time in Afghanistan. When the title didn’t sell, Graff left the project behind and took a break from writing. But then a return to Wisconsin and its Northwoods inspired him to write again.

“After writing about Afghanistan for seven years, which was not a happy sort of feel-good novel, looking out at the river and being home in the Northwoods again, knowing that I had a story about these two boys, and they would run through the forest that I ran through when I was a kid, and travel down the rivers that I traveled down when I was a kid – that was a nice space to spend time,” Graff said.

Raft of Stars follows those two 10-year-old boys in northern Wisconsin during the summer of 1994. Having both grown up to that point in less-than-ideal homes, one of the boys has had enough of seeing how his friend’s father treats him and takes things into his own hands. The two flee into the woods, thinking they’re in trouble. While the two boys battle nature, four adults track them down, everyone on a journey of their own.

Graff created that sense of place from his childhood recollections, naming the fictional town Claypot, Wisconsin, but the fictional elements have counterpoints in the real world. Ironsforge Gorge, for example, was pulled directly from Piers Gorge, a place where Graff spent time hiking, fishing and exploring as a kid, and returning as an adult to lead whitewater-rafting tours.

“For the landscape, the memories of barns and the smell of clover and what a cedar forest feels like underfoot – that was all just sort of baked in,” he said. “It was fun to write in a world where people could still get lost in the woods.”

The environment in Graff’s novel is more than a setting, however: It serves as a kind of character in its own right. He said he wanted to demonstrate the power of nature as an equalizer: that when people go out into the wild, they learn who they really are.

Graff was introduced to Door County during the Washington Island Literary Festival in September, and he will return to the peninsula in February as part of Door County Reads.

“I’m really excited to come back to Door County again,” he said. “I’m really thankful for the opportunity and can’t wait to meet more people and more readers and say thank you.”