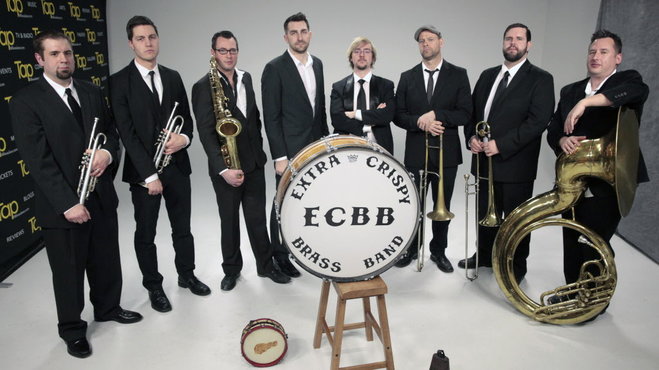 The Extra Crispy Brass Band, of Milwaukee, will usher in the New Year in Baileys Harbor. Submitted photo.

It wouldn’t be a proper New Year’s Eve on the peninsula without the sounds of local and visiting bands. On Dec. 31, Door County Brewing Co. will kick off the countdown to 2016 to the beat of Milwaukee’s Extra Crispy Brass Band.

I caught up with the Extra Crispy Brass Band’s lead vocalist, trombonist and general “bossman” Greg Cramer about the band’s twist on the southern music style, their educational outreach, jazz funerals, and their hopes and dreams for 2016.

Greg Cramer (GC): I started the band because I missed New Orleans; I lived there from 1993 to 1999 and I basically missed the city and I missed brass bands especially, so I found some kindred spirits in Milwaukee and away we went.

AS: Did you play with a brass band in New Orleans?

GC: I did not play with a brass band in New Orleans. I was still kind of in my rock ‘n roll, rockabilly, garage rock phase. I was playing guitar, drums and bass down there and that’s the first time I saw a brass band and I fell in love with it. I never thought I’d be playing in one when I lived down there. I met all these great players up here in Milwaukee and quite a few of them were already familiar with the style…so we decided to do it up here and it’s been a lot of fun.

AS: How would you describe your band’s style?

GC: We play traditional New Orleans jazz and then we play a lot of street funk, which is the more modern sound which could be more for parades, it could be for festivals, it could be for nightclubs, stuff like that. It’s all danceable but I think the traditional is more what people think of as almost a Dixieland sound – that’s what they’d call it up here, not down there. Then you have the newer type stuff too, which appeals to the kids in New Orleans today.

AS: What kind of things do you like to sing about?

GC: A lot of it is about the New Orleans theme of having a good time and enjoying life. That’s part of it. But then we get hired for funerals so we do the jazz funeral so sometimes that’s a theme, the whole gospel tradition.

GC: We always play a few a year. People put in their wills that they want a New Orleans jazz parade so people have called us from Illinois, Michigan, Wisconsin and heck, we played one way out in a cornfield in Illinois and there were cows watching.

AS: What’s the protocol for a jazz funeral?

GC: What happens is that usually you play a dirge [a funeral hymn] going out to the actual cemetery and it’s very slow, it’s very mournful – something like, ‘Just a Closer Walk with Thee,’ and then after the body is interred in the ground, you lead the party back to wherever the party is going to happen. That’s where it kicks up to upbeat and you celebrate the life of the departed person and that’s where it turns into a more fun, upbeat thing. But only on the way back, not on the way out!

AS: Something you say in your website biography is that you want to take the NOLA brass band tradition in a new direction.

GC: We’re not happy to be only covering that tradition. We want to sort of write our own material through our own sensibilities and play those and record those as well. We had a really busy summer and we’ve finally slowed down so we’re writing and rehearsing some of those originals.

AS: Educational outreach is also a big part of what your band is about. Why?

GC: I’ll always remember when I was at a football game in New Orleans and some of the big guys were on the football team and they threw their shoulder pads down and ran and got their tuba and trombone at halftime and they played. I was just astounded that it was almost cooler to be in the band than it was to be on the football team which is not what you see – I grew up in northern Illinois so the football team was the cool thing, not the band. So the fact that they educate the kids and the kids are so into it even today, I feel that is so important. In a lot of other parts of the country, you’ve lost certain traditions when it’s not passed down. We want to pass it on, we want to educate a group up here and pass it on and create that thing. I think it’s happening to some extent. We’ve been to many high schools and we’ve given clinics, then kids are like, ‘Oh my gosh, I didn’t know the trumpet or tuba could be cool! We just thought it was boring music.’ We end up opening a lot of kids’ eyes.

AS: What do you have in store for the brewery’s New Year’s Eve party?

GC: It’s going to be incredibly funky and fun, danceable and upbeat and a great time. Maybe we’ll bust out ‘Auld Lang Syne,’ or something like that but other than that, we’re just going to be playing New Orleans brass band music which is completely fitting for the occasion.

AS: What are Extra Crispy Brass Band’s biggest hopes for the New Year?

GC: To keep playing and to keep developing, really. Keep writing new tunes, keep learning new tunes, keep reaching out – maybe connecting with some new fans. Hopefully we’ll be touring a little bit…maybe release an album or some singles. We’re definitely going to do that.

GC: I’d like to give a shout-out to my parents, Joe and Donna Cramer! They live in Sister Bay part-time.

The party kicks off at 6pm on Thursday, Dec. 31 at Door County Brewing Co., 2434 County F in Baileys Harbor.