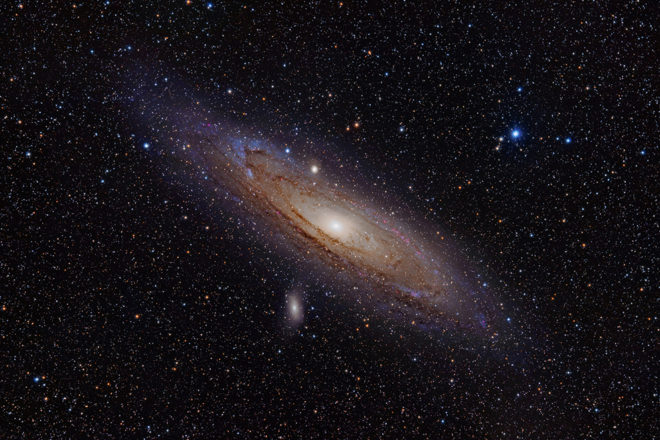 On May 25, the Andromeda Galaxy will be visible all night. Public domain image.

How does that work?

First some basics. The earth rotates on its axis 360 degrees in 24 hours, and the axis points to the North Celestial Pole, which is close to the North Star. So in one hour the Earth has rotated 15 degrees relative to the stars. In March and April I could see summer constellations Scorpius and Sagittarius at 5 am but not in the evenings. Orion was still visible in the evening sky but by May 25 all we’ll see of Orion at 9:25 am is the star Betelgeuse setting in the west. (Sorry, you won’t see Orion until autumn.)

In winter, it’s dark for many hours each night; in summer, it is only very dark for a few hours around midnight. In late March or early April, experienced amateur astronomers sometimes stay up all night to try to see the setting winter deep sky objects as soon as it’s dark enough, and the summer ones just as they rise before it gets light. If they’re lucky and skilled, they might see a whole year of deep sky objects such as star clusters, nebulae and galaxies in one night. For more information, look up “Messier Marathon.”

One more basic point: constellations that are close to the North Star appear to rotate around that star throughout the year, so they are visible all year and are referred to as circumpolar constellations.

At 10:40 the constellation Auriga the charioteer will be just about to set in the north-northwest end of the Milky Way. The bright star in Auriga is Capella, the goat star. Gemini will be visible low in the sky at 10:40 pm but the horizon will nibble away at the twins until only the two bright stars Castor and Pollux remain; they’ll set about 1:30 am. Leo will be an easy find at 10:40 but loses its brightest star, Regulus, about 2:15 am.

On May 25, the Andromeda Galaxy will be visible all night but the constellation Andromeda will not be completely above the horizon until 11 pm, then remain so for the rest of the night. About an hour later the entire Great Square of Pegasus will clear the horizon and remain up the rest of the night. Use your star chart to see where to look for the Andromeda Galaxy if you brought your binoculars. Figure out how to use three stars in Cassiopeia as an arrow to point to beta Andromedae and how to jump from that to a star midway between beta and the galaxy, or how to use the Great Square of Pegasus to get your bearings. If sky conditions are favorable, the galaxy should spread across the entire field of view of your binoculars.

Scorpius and Sagittarius will be up all night. If you have binoculars, use a star chart to find several globular clusters, the Lagoon Nebula, the Trifid Nebula and others in the area. It’s exciting if you’ve never spotted them in binoculars before. Catch them before they go away in the fall. When you view the teapot asterism in Sagittarius, you’re looking toward the center of our Milky Way galaxy.

You may have heard the expression, “Follow the arc to Arcturus, drive a spike to Spica.” Arcturus is fortunately circumpolar, so you can do that all year. (The arc refers to the handle of the big dipper.) Spica, on the other hand, will drop below the horizon by about 4 am so it’s still up but very low by our 3 am chosen end time. Arcturus is the brightest star you’ll see this night.

The lonely star Fomalhaut, the only bright star in the southern constellation Piscis Austrinus, is due south in November with no other bright stars nearby. During our chosen all-nighter, Fomalhaut will be in the east but will not rise until about 2 am.

If that seems like a stingy list, I only mention some brighter constellations and stars visible over that time period. Keep in mind that many old favorites are circumpolar or nearly so, so will be up all that night. Examples include Ursa Major (the asterism is The Big Dipper), Ursa Minor (The Little Dipper), Draco (the dragon), Cygnus the swan flying along the Milky Way (also called the Northern Cross), Cassiopeia, Hercules the archer (spotted by the keystone pattern) and Lyra the harp. Lyra contains Vega, the second brightest star this night and one of the three making up the Summer Triangle with Deneb (the tail of Cygnus) and Altair in Aquila the eagle. Meanwhile the Milky Way will appear to rotate counter-clockwise over the night.

So bundle up, grab your binoculars and a star chart, a red light or a flashlight with an un-inflated red balloon stretched over it so that you can read your star map [red light affects night vision less than white light], find a dark site away from light pollution, and enjoy three months of constellations in one night.