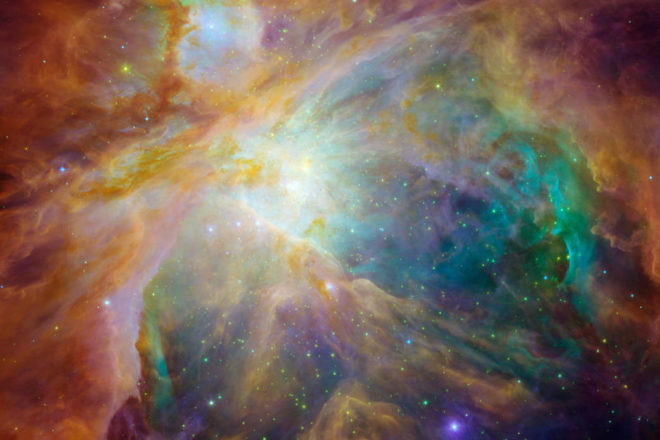 Located 1,500 light-years away from Earth, the Orion nebula is the brightest spot in the sword of the Orion, or the “Hunter” constellation. Photo courtesy of NASA/JPL-Caltech/STScI.

Our expectation of what we will see through a telescope sometimes doesn’t square with our actual experience, and disappointment results.

So it was with my first telescope experience.

A novice, I bought a rather inexpensive Newtonian and set it up on the roof of an apartment house in the Bronx and – first light for the scope and for me – focused on the deep sky on a moonless night.

I’d seen all the wonderful pictures of star clusters and galaxies and nebulae, with their brilliant blues and reds and bright whites, and could hardly wait to see them for myself. Instead, I saw many small, bright spots (stars), with touches of gray-green in the “clouds” of the nebulae, and, in a few places, the palest of almost-imagined color. What, I wondered, was wrong with my telescope?

In time, and with a much better telescope, I found reddish Mars and red and blue supergiant stars, but nothing quite like the pictures in Astronomy magazine. In still more time, I understood that, as Shakespeare wrote: “The fault, dear Brutus, is not in our stars, but in ourselves…,” specifically, in our wonderful eyes, that we see what we see.

Our eyes have color-sensitive cones in the retina, as well as the light-sensitive rods. Color, of course, is a function of the wavelength of light we are picking up, and the spectrum we are sensitive to is rather narrow. Large enough, of course, to show us the beauty that surrounds us with our blue skies, red sunsets, green grass and trees and brilliant flowers, but the light that comes to our eyes from most stars and stellar phenomena like the nebulae is just too feeble to trigger color sensation in our eyes. Planets are a lot closer, of course, but even they are small objects in most telescopes. Stars are just so far away that only the most massive among them, and only if they are at a reasonable distance (like within-a-couple-thousand-light-years “reasonable”), will be captured by our unaided eyes.

There’s another factor, too, and that’s the time color has to work its magic on our sensitive cones. This relates to more than sky-gazing: it’s the basis for movies, too. From the time the retina picks up a photon of light and transfers the information to our brains, a split second goes by. Fast, but not instantly. The old film movies were based on that brief retention-transmittal time. About 16 frames a second, and we’d see motion. So, simply, our eyes don’t hold onto a stimulus long enough for it to register. Imagine what it’d be like if they didn’t let go as fast as they do! All we’d see is a blur of images, one flowing into the next.

That’s why photography works so beautifully in the pictures of the sky we frequently see. I can attach a film camera to the back of my telescope, set the aperture to wide open and let light from the distant deep-sky accumulate for minutes, if need be. Faint color “builds up” on the film for as long as the shutter is open. Of course, there’s another situation that has to be factored in: the earth we are standing on is moving while the shutter is open. And it is moving not only toward the east – our rotation on the Earth’s axis – but also moving with the Earth in its orbit around the Sun. This second element doesn’t really matter much because the objects we are photographing are so incredibly far away the distance travelled barely matters. But the rotation of the Earth does matter, and many larger telescopes (such as my 8” SCT Celestron) compensate for the rotation with a little motor that drives the scope in the opposite direction from the rotation. It’s neat and the result is a clear and un-blurry picture. Sometimes.

While we are on the topic: in addition to the limits imposed by our eyes, it turns out many commercial pictures of the deep sky are not true color photos at all, but are photos to which colors are assigned based on the brightness of the object. The results are invariably beautiful, but not quite real!

So what to do? The “fixes” to see the colors out there may require an investment you are not in a mood to make. But there are objects to look at that do reveal some natural color, and maybe living with the limits imposed is the right answer.

For instance, Mars is distinctly ruddy due to its iron-rich surface; Saturn is a light salmon color to my eyes, and its true magnificence as a viewing object is seeing her rings; Neptune and Uranus, difficult to find, are a wonderful blue-green; really big and bright stars show colors based on temperature. Red is not the hottest star, however, but it is the color of a Red Giant, a star nearing its crescendo in the final struggle of the expansive effect of heat in its nuclear furnace and the power of gravity. In the end, gravity will win, and the star will collapse and then cataclysmically explode, possibly as a supernova, creating in the process all the elements above iron and scattering its remains to the cosmos to be reassembled in other newborn stars (and in our bodies and in every terrestrial thing we see and touch and taste and smell).

The really hot stars are blue! In the same neighborhood as the two red giants is magnificent Rigel, a beast of a star 50,000 times the luminosity of our Sun and 30 times its diameter, a blue super giant 770 light-years away. It is in the lower right corner of Orion. When it begins its death throes some day, it too will become a red giant and it will be enormous. Another couple of stars, an optical double, are found as the head of Cygnus the Swan. The double’s name is Albireo, and one of the stars is orange in color, the other blue. Sort of like a traffic light in the sky. You’d need at least binoculars for this one, but its beauty is worth the extra effort.

Some night, when the astronomical society is hosting a viewing night, you might like to come up the hill off Utah and seat yourself on an oval and grassy structure we have where you can lay back and look up at the sky. We have binoculars there, and you’ll be amazed, if you’ve never looked at the sky this way before, at the incredible number of stars you’ll see. Some of which will show a bit of color and others, well, just what I’d call a gray-green, but what more sophisticated views have dubbed a cross between Medium Aquamarine and Pale Turquoise.

The Door Peninsula Astronomical Society (DPAS) meets Oct. 3, 7 pm at Stonecipher Astronomy Center, 2200 Utah Street, Sturgeon Bay. The program will be about “The Crab Nebula Mystery.” Refreshments will be served and visitors are always welcome.

DPAS will also host Astronomy Day on Saturday, Oct. 14, 1-4 pm at the Astronomy Center. Family friendly activities will include safe solar viewing, comet making, crater making, and others. The observatory will be open.