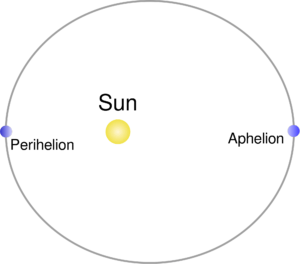 The Earth does not travel in a circle around the sun; the orbit of each planet in the solar system is described by an ellipse. An ellipse is a curve in a plane surrounding two focal points such that the sum of the distances to the two focal points is constant for every point of the curve. For a body in orbit around a much more massive object (e.g. Earth – sun), the large center mass is at one of the foci. The closest the Earth gets to the sun in its annual orbit is called perihelion (near-sun); the farthest aphelion [see Figure 1]. Perihelion is about 147.1 million km; aphelion 152.1 million km, a difference of 3.4 percent.

Question: Is the elliptical orbit of the Earth responsible for the seasons? Two facts suggest not. Firstly, the increased distance from the sun at aphelion results in a 6.45 percent decrease in solar radiation falling on a given area than at perihelion. This change is probably not enough to account for seasonal temperature swings of 100° F or more. Secondly, perihelion occurs every year in early January, aphelion in early July. Because the northern hemisphere experiences hotter weather when the Earth is farthest from the sun and colder weather when it’s closer, something must be wrong with this hypothesis. 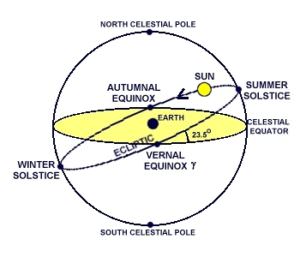 The seasons occur because the Earth’s axis of spin is not perpendicular to the plane of orbit – the axis is tilted 23.44 degrees to the side. As viewed from any one place on the surface of the Earth, this causes the sun’s path across the sky to move north (and lower) and south (and higher) and back throughout the year [see Figure 2]. The sun rises, moves across the sky and sets at the same 23.44-degree angle always. What does change is the location on the horizon of the sunrise and sunset north-south-wise. The result is the sun shines longer and higher in the sky during spring and summer than in autumn and winter. The date on which the sun reaches its southernmost point is the Summer Solstice, near June 21; the northernmost on the Winter Solstice, near Dec. 21. The Equinoxes occur on the dates in March and September when the lengths of day and night, at all latitudes, are equal. The seasons are not caused by the elliptical orbit of the Earth; they are the result of the Earth’s spin axis being tilted off its orbital plane.

The amount of solar radiation falling on a particular area (insolation) during a 24-hour period varies greatly throughout the year for locations at higher latitudes (≥ 40 degrees N & S), but much less for latitudes nearer the equator. The temperatures experienced at greater latitudes therefore will vary more. For example, at 60 degrees latitude, insolation falls to almost nothing near the winter solstice. At the equator, solar radiation is pretty much constant yearlong, resulting in a nearly constant temperature. Door County is split by the 45th latitude, so the insolation will vary significantly throughout the year, but not drop to zero.

Why is the Earth’s spin tilted off its orbit? The prevalent theory: Sometime during the formation of the solar system from the protoplanetary disk, the early Earth was hit by a Mars-sized body. Protoplanet is defined as the collection of matter, in the process of condensation, from which a planet is formed. This created a disk of material around the Earth which coalesced into the moon. The impact, not likely to be dead-on, would have caused the spinning Earth to be tilted. In an interview for Earthsky.com, Richard Gross of NASA’s Jet Propulsion Laboratory said, “The only way Earth’s tilt or orbit can be affected is if some external force – like an asteroid – hits the Earth.”

The 23.44-degree tilt of Earth’s spin axis is important for a habitable Earth – it produces moderate seasons and prevents temperature extremes across the planet. The tilt angles of the planets range from 0 degrees for Mercury to 90 degrees for Uranus. Both extremes produce drastic and constant temperature differences between cold and hot zones. Scientists who have calculated the temperature patterns of planets with various tilt axes theorize that Earth’s tilt is “just right” to prevent these temperature extremes. They also speculate that, not only is the Earth’s tilt close to the optimum value, but that it has remained essentially constant: the stabilizing effect of the moon has kept the spin axis of Earth in a stable direction, thus providing a stable climate advantageous for life.