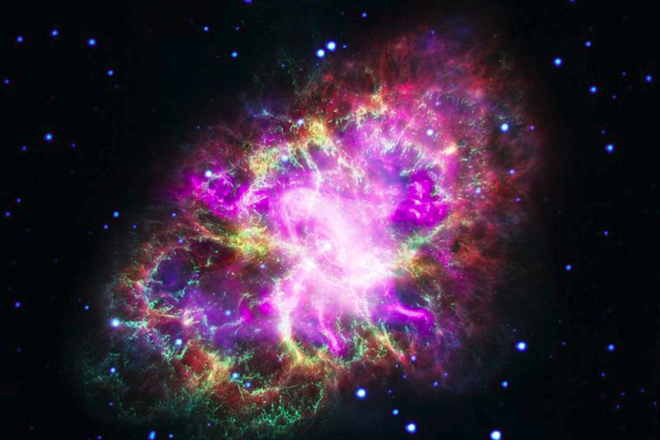 This composite image of the Crab Nebula, a supernova remnant, was assembled by combining data from five telescopes spanning nearly the entire breadth of the electromagnetic spectrum: the Very Large Array, the Spitzer Space Telescope, the Hubble Space Telescope, the XMM-Newton Observatory, and the Chandra X-ray Observatory. Photo courtesy of NASA.

The Crab Nebula is (or was) one of the most beautiful objects in the sky to view with a telescope. Behind this beauty is an astronomical mystery that spans almost a thousand years, which we will travel back in time to unravel.

If you look at the winter sky at the Orion asterism and then allow your eyes to drift upwards, you will see the ‘V’ shape of the head of Taurus. The Crab Nebula may be found near the tip of the horn of Taurus closest to Orion.

Unfortunately, this celestial beauty is not visible to the unaided eye and will only appear as a ghostly smudge in binoculars. With a medium size telescope you can start to make out the details and tendrils.

It was discovered in 1721 by John Bevis and then rediscovered by Charles Messier, who mistook it for a comet. Upon discovering his error, Messier decided to publish an almanac of stationary objects so that no future astronomer would make the same mistake, giving the Crab Nebula pride of place as object M1 in the Messier Catalogue. Lord Rosse, proud owner of a huge telescope in Ireland, produced a series of sketches that showed a resemblance to a horseshoe crab, thus giving the heavenly object its popular name. 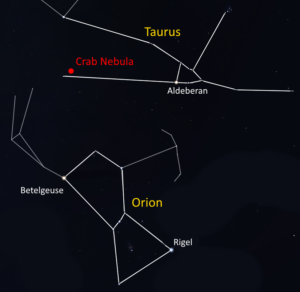 As astronomy developed, spectroscopy was used to study the properties of distant objects. This new technique revealed further mysteries:  the nebula was richer in helium that was expected and there was an unusual intensity of blue light. The blue light observed is normally associated with high-energy electrons spiraling at near light-speed through an intense magnetic field, an effect known as synchrotron radiation. What is that energy source accelerating the electrons to such a fantastic speed?

Finally, at the dawn of radio astronomy, astronomers noticed a number of regions that produced very regular pulses that were deemed far too regular to be natural. The Crab Nebula was one of these, emitting radio pulses 30 times a second. Later studies showed that this was also taking place in the X-ray and Gamma parts of the electromagnetic spectrum. When faced with unknown, complex phenomena, humankind can instantly resolve the issue by applying a three-letter acronym and thus these objects were designated LGMs (Little Green Men). But what is the energy source for these unusual transmissions?

Scientists reversed the expansion of the Nebula to attempt to determine the time of its origin, arriving at a conclusion of 900 years earlier. In 1928 Edwin Hubble proposed that the origin of the Crab Nebula coincided with the Supernova of 1054.

Multiple observers in the Far East and Middle East had reported a “guest star” in 1054 that was bright enough to be seen during the day and more intense than anything except the sun and moon. This star was visible with the unaided eye for more than two years. The lack of European records confirming this event is probably due to the continent suffering the ravages of the plague at the time. In 1942, Rudolph Minkowsky found a star with a very unusual spectrum at the location of the Supernova, although it now requires a 20-inch telescope to be observed.

With the advent of modern physics, we now believe that we have an answer to the mysteries of the Crab Nebula. Stars like our sun generate their energy from fusing hydrogen into helium. There is a delicate balance within a star:  gravity attracts the matter of the star into a hot, dense mass that allows fusion to take place. The radiation pressure from the energy released by this reaction resists this gravitational collapse. Stars like our sun find a balance between the gravitational collapse and the radiation pressure, which will last for another five billion years or so.

Larger stars form a core of helium, which, if the pressure becomes large enough, start to fuse helium into carbon and oxygen, releasing even more energy, causing the star to expand due to the greater radiation pressure. The helium-burning phase can last for around a million years. If the mass of the star is sufficient, then carbon (for about 1,000 years) and oxygen (for around 100 days) can fuse into heavier elements (neon, magnesium, silicon, sulfur and eventually iron), releasing even more energy at each, ever shorter, stage (silicon fusion typically lasts for about five days). Iron is the “break even” element as fusing iron absorbs more energy than it produces.

We now have a recipe for a cosmic anti-soufflé, starting with the ingredients of a star about 10 times the mass of our sun with a five-day-old iron core that reaches a mass of about 1.4 solar masses. At this point the iron will start to fuse, absorbing energy, rapidly cooling the core and almost eliminating the radiation pressure. This will cause a sudden and rapid collapse (more than 50,000 miles per second), resulting in intense pressures that start to degenerate the matter of the core, which detonates in a huge nuclear explosion, ejecting 80 percent of the star.

Aha! Now we can link the Nebula, rich in helium, to the explosion seen in 1054.

Meanwhile, in the core, matter collapses and degenerates into mostly neutrons, turning an object larger than the sun into something the size of the Door Peninsular, where one teaspoon of this neutron soup would weigh more than a billion tons. Like a spinning figure skater drawing their arms inwards, this collapse makes the object spin much faster – to around 30 times a second in the case of this neutron star. With a huge gravitational and magnetic field accelerating any charged particles (including electrons), electromagnetic radiation will be generated and emitted along the spinning poles.

Bingo! We have an energy source, accelerated electrons (blue light) and a radio lighthouse (or pulsing star). This understanding was developed in 1968 with the discovery of the Pulsar star type.

Radiation from the Crab Nebula has proven to be really useful in studying our solar system, by providing us with a cosmic x-ray machine. As objects pass in front of M1, the resultant x-ray images have allowed us to study the corona of the sun and learn about the atmosphere of Saturn’s moon, Titan.

After a deluge of science to solve the mystery, I would like to leave you with a beautiful composite image of the Crab Nebula that NASA developed earlier this year, combining visible, radio, infrared, ultraviolet, X-ray and gamma images.

Enjoy them while you can. As a footnote, based on the rate of expansion, it is expected that in another 1,500 years the Crab Nebula will be too faint to be seen from Earth. Given the distance then, this point was reached around 5,000 years ago, the Nebula is no longer emitting sufficient light to be seen and the only images are from light that has already started its journey to us.