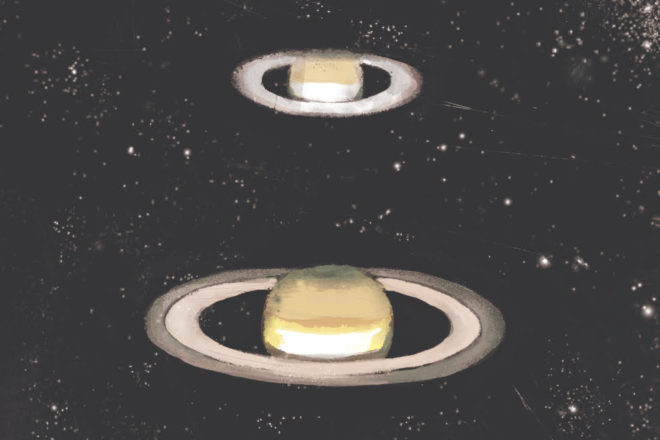 This image pair suggests how Saturn might look through a small telescope (less than 4-inch aperture) on a mediocre night (top) and through a larger 8-inch telescope on a night when the air is especially still (bottom). Illustration by Ryan Miller, based on a Sky & Telescope illustration of images provided by NASA HST.

If you have looked at the night sky anytime this spring, you may have noticed a bright “star” rising in the east after the Sun has set. This is the ringed planet Saturn. Its current location in the heavens is a bit west of the constellation Sagittarius, the Teapot. Because Saturn moves relatively slowly across the background of stars from night to night, it will be in this vicinity well into autumn. On June 15, Saturn will be at opposition. Opposition is when a superior planet is closest to Earth in its orbit; when the Sun, Earth and the planet are all lined up in that order. A planet is superior to another if its orbit is outside that of the other.

Viewing of a superior planet is naturally best when it is nearest the Earth: its face is fully illuminated by the Sun, it is brighter than any other time of the year and is visible all night long. A medium-sized or larger telescope, magnifying 30x power or greater, will allow you to see Saturn’s rings and a few of its brightest moons. Because the plane of the rings is tilted 27 degrees from the ecliptic (Earth is on the ecliptic plane and the planets all orbit close to it) the extent of their collective visible face varies as Saturn moves through its long year. One Saturn orbit equals 29.46 Earth years. The rings were edge on and essentially invisible in 2009 but this year they will be prominent and at full tilt on Oct. 17.

The figure shows how Saturn will look when viewed through a small telescope and a larger one on a still night. If you can see the dark Cassini division that splits the system into the outer A ring and the inner B ring, then you have a good view! Like Jupiter, Saturn displays banded cloud tops, but they are more muted because there is more high-altitude haze in its upper atmosphere. You will need a telescope at least six inches in aperture to make out the bright Equatorial Zone, the darker North Equatorial Belt and the dusky North Polar Region. A yellow-pass filter will usually sharpen Saturn’s image; a light green filter may improve contrast in the planet’s belt and zones. Also look for the shadow of the rings on the globe and the shadow of the globe on the rings in back.

The rings consist of countless small particles ranging in size from a micrometer up to a meter. The particles are made almost entirely of ice with trace amounts of rocky material. The rings span 300,000 kilometers but their thickness is only 100 meters or so thick on average, with some large variations. A standard piece of U.S. writing paper enlarged to match the span of the rings would still be 1,000 times thicker than Saturn’s rings!

Saturn has 62 moons with confirmed orbits, ranging in size from tiny moonlets less than one kilometer across to colossal Titan, the largest moon in the solar system and larger than Mercury. Six of the moons are visible using a telescope: Titan, Iapetus, Rhea, Dione, Tethys and Enceladus all orbit outside the rings. Titan can usually be seen with a small 60mm scope, but larger apertures are needed to make out the others. Sky & Telescope has a more detailed guide to viewing Saturn at skyandtelescope.com. They also have a Saturn’s Moons JavaScript utility, which provides a snapshot of the moon positions for any given date and time.

For planets whose orbits are superior to Earth’s, their usual eastward movement across the celestial sphere will yearly reverse direction for a time. This retrograde motion occurs not because the planet reverses direction in its orbit, which would violate the laws of physics. It occurs because the Earth has a smaller and faster orbit around the Sun; when the Earth overtakes the slower superior planet, the movement of the planet only appears to temporarily move in the backward direction. As the Earth quickly swings around the Sun on its inner orbit, its motion relative to the planet will slow and reverse and the planet will again appear to move in its normal, prograde motion across the stars. Because of this pas de deux, Saturn will loiter near Sagittarius this year well into November.

You probably know that stars twinkle, but planets do not. Stars are so distant they appear as pinpoints of light, even through a telescope. Because all the light arrives from a single point, the path is highly susceptible to atmosphere interference. Its image scintillates. The face of a planet as viewed from (relatively) nearby Earth has a much larger angular diameter and only heavy atmospheric turbulence will effect the image of Saturn much.

Saturn currently has a man-made moon: The Cassini spacecraft has been in orbit around the ringed planet since July 2004. In addition to dispatching the Huygens spacecraft to successfully land on the surface of Titan in January 2005, Cassini has sent back loads of high-resolution photos of Saturn’s rings, moons and atmosphere and copious amounts of data about the electromagnetic, gravitational and physical/chemical environment of the planet and its moons. Cassini is near the end of its mission, but before it is commanded to plunge into Saturn’s atmosphere and burn up on Sept. 15, it will go where no spacecraft has gone before. Cassini is now currently executing 22 planned orbital dives through the narrow gap between the inner rings and the atmosphere of Saturn, only 1,900 km wide. Planetary scientists think the gap is clear of orbital debris, but there is a small possibility that the spacecraft could collide with small particles, with a relative velocity of 45 times the speed of a bullet! Let’s hope it survives the trip, because Cassini will constantly collect data about our giant ringed friend, right to the bitter end.