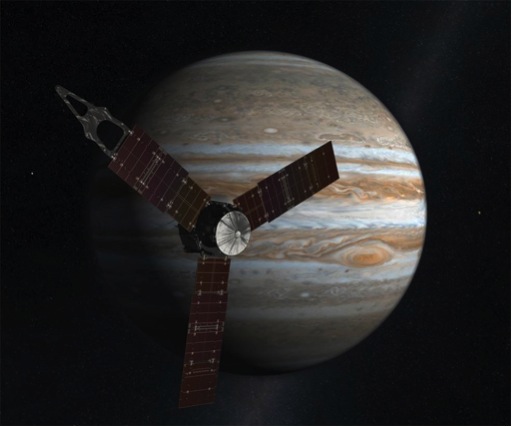 I was stopped cold in July while reading of the U.S. space mission Juno, which successfully achieved orbit July 4 around Jupiter, our biggest sibling in the Solar System. Stopped, not by the incredibly difficult five-year journey and the accuracy required of this “Wife of Jupiter” to achieve a perfect orbit, nor by the revelation that Juno’s control system has to be shielded by a seven-inch-thick Titanium box to protect it from the severe radiation generated by the Jovian atmosphere that the satellite must endure during its 15-month mission. No, I was floored because I had never heard of Jupiter being referred to as a failed star. It turns out that the failed star reference isn’t exactly new, just beyond the grasp of my consciousness.

I had not appreciated the similarity between large gaseous planets and the tiniest of stars. There are rocky planets and gaseous planets, and there are stars, but the thought of them being essentially created by the same mechanism, and furthermore, there being the possibility of more than one star forming within a planetary system immediately set my mind spinning.

Imagine: if Jupiter were a star, we’d have two sunrises and sunsets, maybe in opposition one year and simultaneously the next! Jupiter would not be nearly as bright as the Sun, being four times as far away and much smaller, so nights might be dark, or not so dark, depending on where Earth and Jupiter were in their respective orbits. How would the ancients have dealt with weaving a second, minor sun god into their lore? And who can tell how astrologers would spin this?

I’ve always known some things about Jupiter: its being the largest of the Solar System’s currently eight planets; its having a giant red spot, reportedly being a centuries-old storm; its being the host planet to the four Galilean moons discovered by Galileo Galilei more than 400 years ago; and of its being a “gas” giant, consisting mainly of gaseous elements, without a solid surface like the four inner planets, including Earth. And Jupiter is really big, 11 times the size of and 318 times more massive than our little Earth. In fact, Jupiter’s red spot alone is twice as far across as Earth. But I’d never considered the possibility or potential for Jupiter to become a star.

It turns out, after doing some probing, that we didn’t come very close to having a second star. There just wasn’t enough matter locally available after the Sun formed for another, even tiny star, to be created. Jupiter already has two times as much mass as the rest of the orbiting bodies in the Solar System, but would need 80 times more to reach a threshold where it could create enough pressure and temperature in its core to produce the fusion of hydrogen that defines true “Star”-dom. And if Jupiter wished to achieve equality with the Sun, it would need to be 1,000 times more massive.

We may have missed out on this double delight, but there are a lot of multiple star systems in our Milky Way galaxy. We can observe them from our little rocky perch, and measure their distance, size and the orbital frequency between them. More than half of the stars we know of are in such systems. This puts our “loner” Sun in the minority.

So Jupiter, king of the Roman gods, is not a failed star. Not by a long shot. It could more accurately be called a failed Brown Dwarf, however, and that is a most intriguing topic in itself, and one for another day.

The Door Peninsula Astronomical Society presents lectures on topics of astronomical interest the first Tuesday of every month at 7 pm during the club meetings that are free and open to the public at the Astronomy Center and Observatory, 2200 Utah Street in Sturgeon Bay. On Tuesday, Sept. 6, the meeting features a lecture on four astronomers: Brahe, Galileo, Kepler and Newton. A monthly viewing target will also be presented. Additionally, our next public viewing night at the Observatory is Saturday, Sept. 3. The gate will open at 7:30 pm.