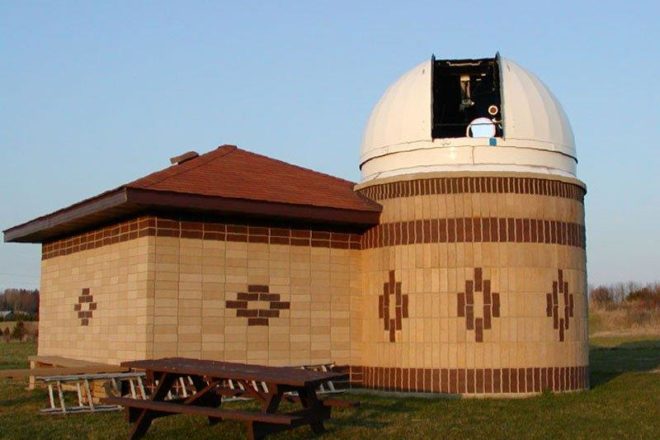 Twenty years ago on May 9, 1998, the Leif Everson Observatory had its dedication ceremony. Located at the Door Peninsula Astronomical Society’s astronomy campus at 2200 Utah Street, Sturgeon Bay, the Observatory has been the focus of many stargazing evenings. From the beginning, the building was a cooperative venture between the Sturgeon Bay School District and the Sturgeon Bay Education Foundation. The Sturgeon Bay Education Foundation was a nonprofit organization founded to raise funds for the school district and consisted of teachers and community-minded members. One of these members, Jim Maki, 8th grade teacher at T.J. Walker Middle School, was the impetus behind the building of the Observatory.  He was an avid astronomer and thought having an observatory for his students to use to study stars and planets was a great idea. He contacted Ray Stonecipher, retired professor from the University of Wisconsin – Whitewater, and together they worked to make the Observatory a reality.

A site was chosen on the Sturgeon Bay School District forest property east of Highways 42/57 and north of Utah Street. The Observatory was the recipient of many monetary donations, including a grant from the Peterson Foundation. Francis and Arliss Everson donated a large sum of money to fund the telescope, naming the Observatory “The Leif Everson Observatory” in memory of their teenage son who died tragically at a football camp.

Groundbreaking took place July 8, 1997, and was a cooperative effort of many people and businesses, headed by Jim Maki with Ray Stonecipher acting as consultant. Local architect, Henry Isaksen of Isaksen Architects, was hired to design the building. Others were involved in the digging of the foundation, construction of the building using leftover bricks from Sawyer Elementary School and the construction of the fiberglass dome in the school shop class. Sturgeon Bay Utilities donated the underground wires and when internet service was needed, Charter donated the fiber optic cable.

The Observatory houses a 14-inch Schmidt Cassegrain telescope operated by a tracking mount controlled by computer. When the telescope was installed, it had to be perfectly aligned to the North Star, accomplished by Ray Stonecipher and John W. Beck, computer expert and avid astronomer.

Recent upgrades in software and hardware were installed by Door Peninsula Astronomical Society (DPAS) members, Dave Lenius and Steve Ransom-Jones. With the addition of a MallinCam video camera, it allows DPAS to stream images from the telescope live around the world at nightskiesnetwork.ca. During the transit of Mercury on May 9, 2016, DPAS was one of the few sites that had a clear view of the event. In a reverse process on August 21, 2017, on the mostly cloudy day of the total eclipse of the sun, the Observatory’s computer was able to capture the eclipse from a clear sky location on the Night Skies Network and project the images to a projection screen located in the Stonecipher Astronomy Center. Hundreds of people came out to experience this historic event.

Throughout its 20 years of operation, the Leif Everson Observatory has focused on countless sky objects and been the inspiration to many viewers, young and old, through viewing events facilitated by DPAS. The Observatory is open to Society members and the general public monthly, usually on the Saturday evening closest to the new moon, a yearly Astronomy Day, and on special astronomical occasions.

The DPAS monthly membership meeting will be held at 7 pm, Tuesday, June 5 at the Ray and Ruthie Stonecipher Astronomy Center, 2200 Utah St., Sturgeon Bay. The program starts with a short presentation by Dr. John Beck on “Astronomy Basics: Learning the Night Sky.” The main program, “Measuring Gravity (Newton to LIGO),” will be presented by Steve Ransom-Jones. The public is welcome and refreshments will be served.