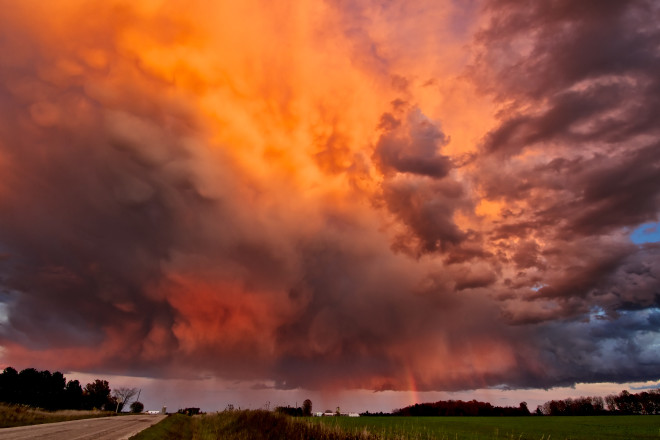 A red sunrise can mean that a high-pressure system (good weather) has already passed, thus indicating that a storm system (low pressure) may be moving to the east. A morning sky that is a deep, fiery red can indicate high water content in the atmosphere. So, rain could be on its way.

When we see a red sky at night, this means that the setting sun is sending its light through a high concentration of dust particles. This usually indicates high pressure and stable air coming in from the west. Basically good weather will follow.

According to the National Weather Service, clouds are divided into 27 categories, nine each for low, middle and high clouds.

A shelf cloud is a low, horizontal wedge-shaped cloud associated with a thunderstorm gust front – or occasionally a cold front without thunderstorms. The underside appears turbulent, boiling and wind-torn.

Meet Roy G. Biv, otherwise known as the colors of a rainbow – Red, Orange, Yellow, Green, Blue, Indigo and Violet. Seventeenth century mathematician René Descartes wrote about the optics of rainbows by studying how light interacted with a single drop of water. “Considering that this bow appears not only in the sky, but also in the air near us, whenever there are drops of water illuminated by the sun, as we can see in certain fountains, I readily decided that it arose only from the way in which the rays of light act on these drops and pass from them to our eyes,” Descartes wrote in explaining why we see a bow. The pot of gold at the end of the rainbow is a fool’s errand.