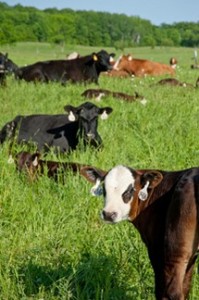 Cows rest in a field at Waseda Farms. Photo by Dan Eggert.

It isn’t every day a person gets to amble amongst the livestock before purchasing the week’s meat. Many of us are in the habit of forgetting that our favorite cut of steak or a nice, juicy burger comes from a cow.

McDonald’s sells Angus burgers nowadays. How many of us know “Angus” simply refers to the breed of cattle, and not how it was handled or how the meat was processed?

I drive past so many farms in northern Wisconsin it’s dizzying. Yet, when I go into a major grocery store, it’s difficult to find local meat. I pick up an unmarked package with no indication of where in the whole, wide world that Angus patty originated.

Places like Waseda Farms, located on Logerquist Road in Baileys Harbor, make it easy to get the satisfaction of knowing exactly where that steak came from. Just look out to the rolling hills of over 300 acres of farmland.

“Here’s a little bit of a weird treat for you,” Waseda’s owner, Tom Lutsey says. “Hey Mama! Where’s your babies?”

He’s looking for a pair of Aberdeen Angus twins, male and female. Waseda also has Hereford cows and Black Baldy cows (a cross between Aberdeen Angus and Hereford).

Ninety percent of the time, Lutsey tells me, twin babies will be sterile. At this moment we realize the female calf has escaped; she probably slipped underneath a fence somewhere. We spend some time combing the outskirts of the paddock.

Cows graze lazily, their pasture fresh and rotated almost daily. First owned by the O’Brien family, the Waseda property was given to the Priests of Sacred Heart as part of the St. Joseph’s Retreat Center in the 1950s. The Lutseys have owned and operated the farm for three-and-a-half years.

“Every one of these little paddocks,” Lutsey explains, “the cows go in and then they move. We probably have 100 of these little fields with the cows rotating almost daily.” 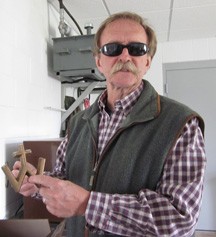 Owner Tom Lutsey explains use of nitrogen branding in organics. They are using the “W” with a cross built into the top with respect to the priests who owned the land before them, and whose cross still tops the hill on their land near County A.

No cows will be back in the same field for 30 to 40 days. During that time they use a manure-smoothing device to redistribute and evenly fertilize the grass. There are approximately 125 cattle on the Waseda Farms currently.

“We’d like to have a few more,” Lutsey says. “We’d like to be having 80 calves a year and we could have fresh meat instead of frozen.”

When the cows move, so do their “toys.” They’re treated to a round of tasty cow supplements – organically improved, inorganic minerals – including selenium (helps cattle birth) and clay. They also have “beauty brushes” which help with good grooming and give them organic insect control.

“I pulled her calf out on Sunday night. That’s the first time I had to do it all by myself,” he says.

Tom Lutsey and his wife Sharon visited Door County from their home in Green Bay for many years before moving here permanently, about 20 years ago. They first bought a farm where they had a small number of cattle next to Kevin Kiehnau.

“We used to be in the ice cream business, so I have a lot of agricultural background. We sold to Good Humor and worked for them for awhile before we bought our farm here in Door County,” Lutsey says.

Grandin, who is autistic, invented a “hugging machine” – an instrument that helped calm her down in a way a human hug could not. The machine allowed her control of the hug. In the same way, she designed a vice-like hugging machine for animals. 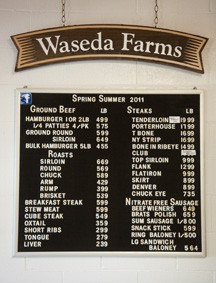 The Lutseys are the first in Wisconsin to institute Grandin’s system, and the facility is truly unique, handling cattle in the most humane way possible. The animals are slowly led through a series of pens and pathways with precise measurements. The detail of her system extends all the way down to welding a small piece of solid steel rod along the bottom of the pathway to stop the cows’ hooves from slipping underneath the washout side.

The system also makes vet visits much easier. It allows them to check the cow’s hooves, as well as take weights and measurements more often.

Lutsey explains, “[The cows] can’t see people, movement, or shadows – shadows on the ground affect them all the time. That scares them. This is a no see, no fear type of thing.”

It’s easy to see there’s no margin for error: the pathways are narrow to prevent more than one cow passing through at a time and to stop them from reversing. This makes the cattle calmer and reduces the risk of injury.

While some farmers might think the system excessive, Lutsey has opened up his facilities to other farmers, enlightening them to its advantages.

“One of the farmers just sold off all of his dairy cows. He wanted a bunch of guys to come over and help to load ‘em up, weigh them, have the vet check them – to do all kinds of things,” Lutsey says. “We brought all 60 of his cows over here, shuttled them through, and what they thought was going to be a two day job they did in about six hours.”

Another advantage Lutsey explains is the ability to closely track their animals.

“We can weigh our animals every time they come in,” Lutsey says. “No other cattle farmer around here will know what the average weight gain is for his calves and steers. We want to know that so we know how good our feed is and whether they’re over or underfed.”

The Lutseys will sell their Waseda Farms, organic, grass-fed beef at the Jacksonport Farmer’s Market on Tuesdays.

Who has the happy cows now, California?