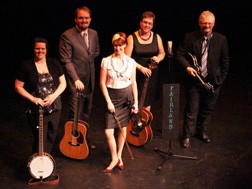 The Fairland Bluegrass Band will perform a concert at the Sister Bay Village Hall on April 28 at 7 pm and the Southern Door Community Auditorium (SDCA) on May 6 at 2 pm.

Dan Rass is a 40-year veteran in the Door County music scene. He plays, writes, and arranges the music; plays the mandolin and guitar; and sings many of the leads. Teri, his wife, is on the bass guitar; and his daughters, Calyn and Hanna, play the banjo and fiddle. Calyn’s husband, Neil Saindon is on guitar and vocals.

The concert at the Sister Bay Village Hall is sponsored by the Door County Cowboy Church and the cost will be a $5 donation. The concert at the SDCA will cost $10; tickets can be purchased by calling 920.493.5979 or visiting http://www.southerndoorauditorium.org.