In the annual Fall 50 ultramarathon that took place on Saturday, Oct. 24, Zach Bitter of Davis, Calif., and Camille Herron of Oklahoma City, Okla., set new course records on their way to becoming 50-mile national champions. The event served as the U.S. 50-mile National Championship through USA Track and Field (USATF) for the second year in a row.

Bitter, a native of Wisconsin, set a time of 5:17:25 to beat the previous course record of 5:26:52, which Bitter set himself in 2011. Herron, running in one of her first ultramarathons, set a new course record with her time of 5:38:41. The three-time Olympic Trials qualifier in the marathon also set the unofficial new 50-mile world record.

Ann Trason currently holds the women’s world record for a 50-mile run in set in 1991 with a time of 5:40:18, but USATF will not officially recognize Herron’s finish that bested Trason. World Record runs must be completed on a course that is in a loop, with the start and finish near each other. Since the Fall 50 is a point-to-point race, Herron’s record remains unofficial.

The reason for this technicality is the ability of a course to run downhill from start to finish or one-directional wind aiding runners for the entirety of the course.

In a day plagued by rain, cold and 25 mph headwinds, Race Director Sean Ryan posed the question to Herron, and an audience of fellow runners, as she stood on stage to get her award, “Was the course all downhill? Did you have a tailwind the whole time?” To which Herron and the audience loudly objected.

Ryan spoke with USATF officials after the race hoping for an exception given the conditions, but found none.

The top five men and women as well as the Masters division winners (athletes over the age of 40) split a $12,000 prize purse.

Ryan also recognized Stu Kolb of Green Bay for finishing the solo division of the Fall 50 every year since its inception in 2006. 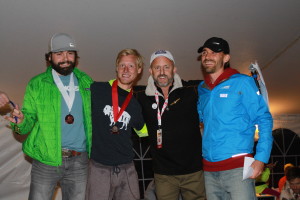 The Fall 50’s contract for hosting the 50-mile Road National Championship expires this year and Ryan is unsure whether he will apply for championship status again, citing costs to the runners and the partnering charities.

“The hard thing about it is I’ve got to get a prize purse that would otherwise go to charity,” said Ryan. “We’re evaluating the decision and there’s a lot of ways to look at it. Part of it is the pride in hosting nationals and recognition of the county. The local charities would rather just see the money go to their cause and I kind of agree with that.”

The money at question is the $12,000 prize purse as well as the perks given the elite athletes such as complimentary hotel rooms and waived entry fees. Ryan hoped the national championship status would increase solo participation in the event, balancing out the costs. But with solo participation numbers remaining stagnant, he is not sure if the national championship status is financially viable.

Another cost associated with the championship status was requiring solo participants to purchase a USATF membership at $35. To be eligible for prizes at USATF sanctioned events, athletes must have membership. But many athletes at the Fall 50 do not have the goal of reaching the podium, competing as a personal achievement rather than endurance-world notoriety.

“For some of the middle of the pack age groupers it’s upsetting to them,” said Ryan. “They don’t see the value in having the membership.”

Ryan has until December to place a bid, when USATF officials will meet in Indianapolis to decide the schedule for 2016 championship events. Should he choose not to place a bid, Ryan still hopes that the record-setting times of participants this year will promote the Fall 50 to more athletes looking to break their own personal records in a 50-mile run.