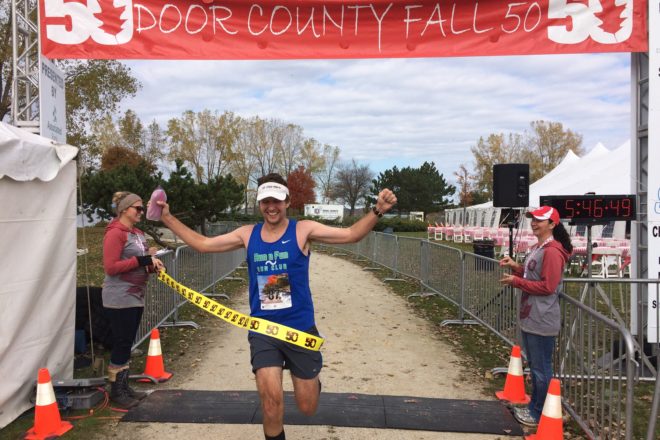 Chase Nowak of Plymouth, MN took the lead of the Fall 50 Door County at mile 24 and never relinquished it. Photo contributed.

The race featured 84 solo competitors who completed the entire 50-mile course from Gills Rock to Sturgeon Bay, and an additional 450 relay teams featuring 2 – 5 runners each. The air was crisp, with temperatures in the high 30s at the start, and skies were partly cloudy.

Nowak expected to contend, but got a reality check early in the race when Mario Macias of Colorado Springs, CO bolted from the pack.

“Right from the gun, he took off, and I had no idea who he was,” Nowak said. “He was a complete surprise to me.”

Macias quickly built a big lead, and a few miles into the race he was out of Nowak’s vision, but Nowak, 27, ran steady, taking advantage of a Macias injury at mile 24 to take a lead he didn’t relinquish.

The 29 year-old Blumentritt, who placed 6th in 2015, hoped to contend, but didn’t know what kind of competition would show up.

“I was in 4th or 5th for half the race,” said the Egan, MN resident, “then I started passing some ladies around mile 25.”

Blumentritt finally pulled ahead of Nora Bird near mile 31 and held on for the win.

“I felt really good the first 50k, then there was a long straight shot that was pretty tough,” she said. 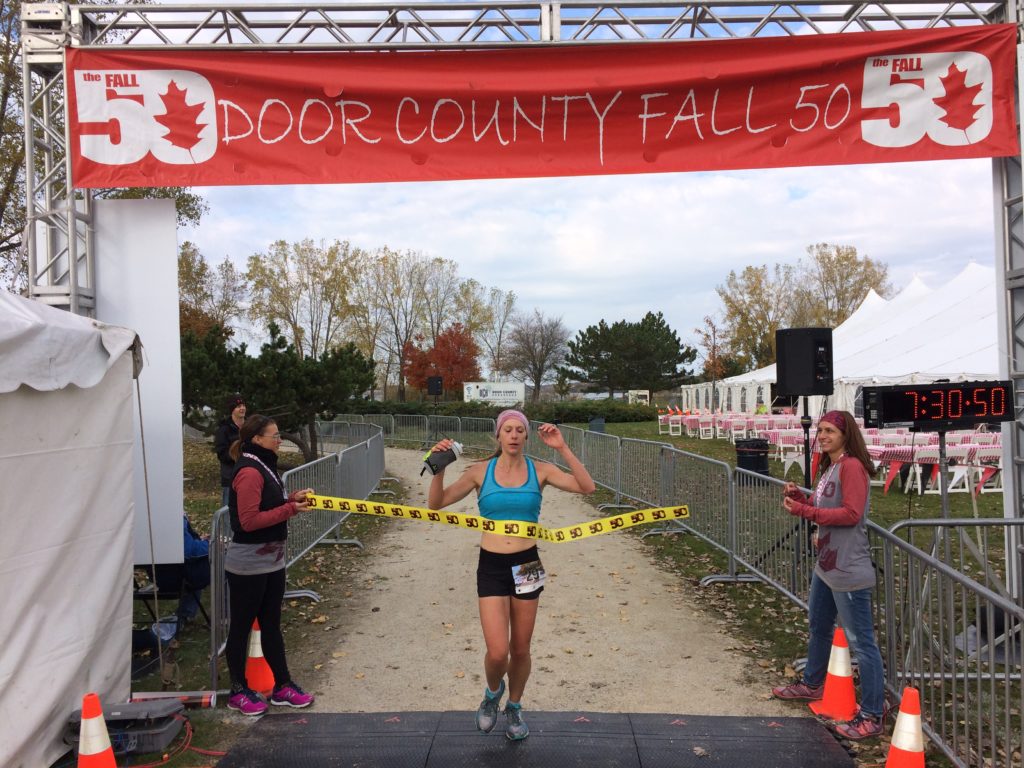 “I absolutely love Door County, it’s so gorgeous there,” she said. “It’s one of my favorite places to be. What better way to see it than to start at the tip and run all the way down it. It’s super peaceful, and really fun running through all those small little towns.”

More than 90 percent of 2,000-plus participants in the Fall 50 travel to the race from outside Door County, staying in lodging facilities up and down the peninsula. The race ends with an all-you-can-eat and drink party at Sunset Park in Sturgeon Bay. It sold out in less than 20 minutes in April.

Fall 50 Expanding to Leelanau and Cape Cod in 2017

“People ask me if I’ll expand the race, and my answer has always been that we can’t handle more people on the Door County course,” he said. “Then a friend said, ‘No Sean, when are you going to expand to other destinations?’ That lit a light bulb for me.”

Ryan announced plans to bring the race to Michigan’s Leelanau Peninsula and Cape Cod, MA in 2017. He plans to add a race in Ocean City, MD in 2018. He has mapped out courses in each region, and received the go-ahead from local officials. Matt Auger, Director of the Falmouth Road Race, will direct the Cape Cod event, and Ryan is finalizing details to hire directors in Leelanau and Ocean City.

“As a race director you love to sell out in 20 minutes, but the downside is you’re disappointing all of these people you have to turn away,” he said. “Now we can give them another option in another beautiful part of the country.”

But Ryan also said the move comes in response to industry trends.

“I looked at all the other events I direct, and with the exception of the Door County Triathlon, none sells out as quickly as the Fall 50,” Ryan said. “The industry is flat, and as a business, you want to invest in your growth sector.”

Ryan is also the director of the Bellin Run, Bellin Women’s Half Marathon, and the Packers 5k, among other Wisconsin events, and the Across the Bay 10K in Baltimore, MD. He previously served as director of the Cellcom Green Bay Marathon.