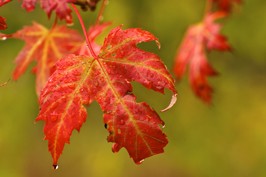 Naturalists are predicting the county’s trees will change hues earlier than typical due to this year’s weather. Photo by Len Villano.

As the summer season slips away, a fall phenomenon began to take place: leaves changing from green to yellow, orange and red.

“I think it’s going to be a faster season, so get out and enjoy it while you can,” Wagner said.

The early, warm spring caused trees to put on their leaf layer sooner than usual, said Coggin Heeringa, director of Crossroads at Big Creek, so they might shed leaves sooner too.

Leaves begin to change color as the days get shorter and the temperatures drop. They form an abscission layer – a layer of cork-like cells that blocks movement of nutrients – between the stem and the branch. Eventually leaves stop producing chlorophyll – the molecule that helps trees turn sunlight into food and makes leaves green – and fall off.

“Think of leaves as little factories, and when they get to the end of their useful lives, you just dismantle the factory,” Heeringa said.

When the chlorophyll’s gone and the leaves are still holding on, the other colors get their chance to show off.

Leaves don’t always change the same color. Heeringa said fall hues depend on a lot of factors, like moisture in the air, sunlight and temperature.

The fall colors of county trees depend on the weather. If it frosts early, Heeringa said the leaves will turn brown and start to crumble.

Sunny days and cool nights are the recipe for red and purple leaves, because those conditions cause leaves to form more anthocyanins, the pigment that makes those colors.

“So if we have a lot of sunny days in September, we’re more likely to have red trees in October,” Heeringa said. 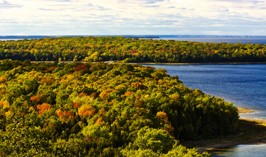 A long stretch of cloudy days mean more yellow and orange leaves, because fewer anthocyanins are produced. Yellow color is formed by xanthophylls, and orange is formed by carotenoids, which are both present in the leaf throughout the year.

Dry conditions, like those experienced by most of the country this summer, can mean fall leaves will create an abscission layer sooner and cause leaves to fall off while they’re still green.

Lots of places in Door County are “leafing” hot spots, but Heeringa and Wagner have their favorites.

Wagner’s favorite place to see the colors change is at the ski hill in Potawatomi State Park, because the hill is high enough to see the varied topography of the rest of the park and the water.

“You combine the color of the sunset and the changing trees and it’s perfect,” Wagner said.

Heeringa likes to climb Eagle Tower at Peninsula State Park and see the colors of the forest against the water.