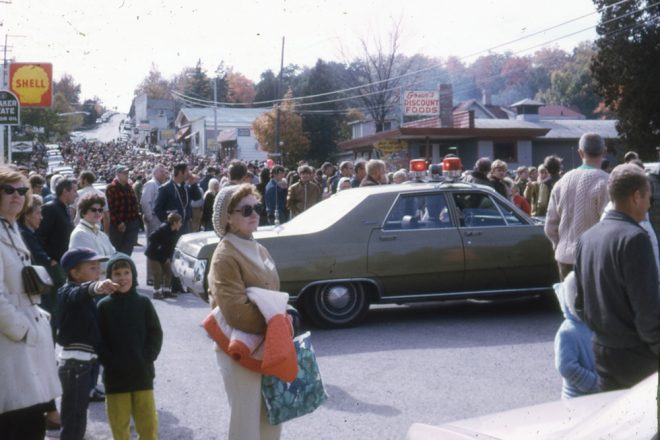 The crowd fills the an early Fall fest celebration. Courtesy of Roger Jungwirth.

Unless you’re behind a bar or working a grill, Sister Bay’s Fall Festival is not synonymous with toil. The weekend when Northern Door lets loose is one of the largest parties of the year, but you don’t get to age 75 without a lot of hard work.

Each has become a remnant of history, and other festivals have also ebbed and flowed over the years. But Fall Fest has endured, thanks to the commitment of residents, business owners, nonprofits and a village that prides itself on putting on a great party.

It started in the late 1940s, when a group of business owners came together to put on an end-of-season celebration in a Sister Bay that looked very different from the one we know today. Tourism was certainly a part of life in the village, but back then, Sister Bay was the workingman’s town: the home to hardware stores, auto dealerships, Wilke Furniture, Bunda’s Department Store and the MasterFreeze building.

“Back then, it was our local holiday,” recalls Dick Burress, who has been around for most of them. “We got out of school Friday at noon so we could go get on the rides before other people came.”

Greg Casperson says the week leading up to Fall Fest was always one of anticipation.

“We’d watch the carnival as it rolled into town past the school,” he says.

Earl Willems would stalk local businesses to sell raffle tickets. Jake Kodanko would shame people into bidding on items at the auction in front of the Sister Bay Bowl. Nonprofits such as the Sister Bay Lions Club would fill their coffers to provide for the community throughout the year, and businesses would earn extra cash to keep the lights on during the winter.

Over time, the festival grew bigger and bigger, drawing more visitors and widening the smiles on the faces of local business owners as new attractions were born. For years, the performances of the Mighty Lions Players drew crowds to the village hall, and the soapbox-derby races attracted throngs of cheering people who lined the highway to watch local kids zoom down the hill.

“Back then, we had a four-foot-high ramp you went down,” remembers Fuzzy Sunstrom. “That got you off to a good start.”

After a few accidents, the derby was put on hiatus, but it will return this year with better safety protocols in place.

The parade remains a centerpiece, though the floats are no match for those of yesteryear. Business owners just don’t have the time to build floats the way they used to.

For Penny Anschutz, the ping-pong-ball drop was her all-time favorite event.

“It was the highlight of my year,” she says.

That event started after a helicopter pilot came up to the county one year to give rides. Some local geniuses thought it would be cool if the next year, the chopper flew down Main Street to drop thousands of ping-pong balls (some with prizes written on them) on the crowd. The drop became the glue that kept people around until Sunday afternoon, when thousands flooded the street with hats, gloves and fishing nets to battle it out.

After a particularly windy year in 2008, an attendee filed a complaint with the Federal Aviation Administration, which led to the cancellation of the helicopter flyover. The village has been trying to re-create the excitement for more than a decade and now shoots the balls off downtown rooftops.

Today, the festival sprawls throughout the town and has morphed into a foodie and drinking festival that brings 30,000-40,000 people into the village at some point during the weekend. The food has evolved well beyond a brat-and-beer menu, and live music has become a crucial part of the experience. Though the carnival is no more, the Ferris wheel is back, as are bungee jumping and inflatable games for the kids.

Louise Howson, Sister Bay Advancement Association coordinator, knows she could probably have a successful event without changing a thing, but that’s not how she rolls. And it’s not how festivals get to 75 years.

“I think you have to evolve,” she says. “Different generations come, and they love the old traditions, but you also have to start new ones to stay relevant. When I was a kid, we loved cake walks and bobbing for apples, but today’s kids and young people like things more interactive. So you have to change while honoring the things that came before.”

Fall Fest 75 will be bigger than ever and, in many ways, will look much different from the festivals of yesteryear, but Burress says the soul remains.

“It’s still a pride-in-place festival for the people in this town,” Burress said. “The fact that the proceeds of the weekend festival will carry some businesses well into the winter doesn’t bother me a bit. Great for them, and great for us, because we’re all in this together.”