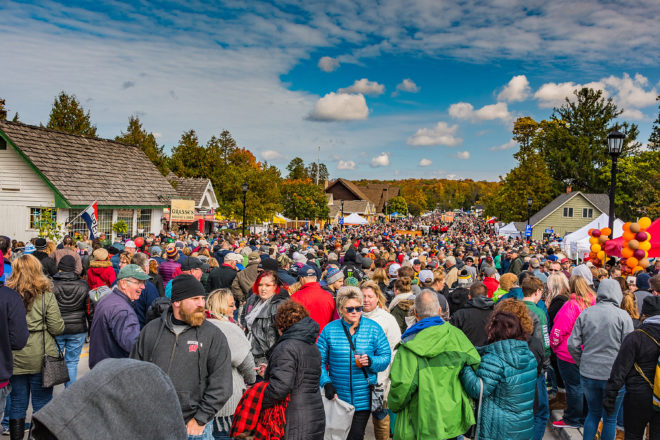 The sea of people that vist on Sister Bay for Fall Fest in October makes for a great audience for arts and crafts vendors, but space for the fair is limited. Photo by Len Villano.

The Sister Bay Advancement Association (SBAA) is searching for a new home for the Fall Fest Arts and Crafts Fair. It has traditionally taken place on Mill Road, east of Bay Shore Drive, but safety concerns have forced it to relocate: The Sister Bay/Liberty Grove Fire Station is just a few hundred yards east of the fair, which limits access and egress for fire trucks in the case of emergencies.

Louise Howson, SBAA coordinator, told the village’s Parks and Properties Committee Feb. 11 that it has been difficult to find a new spot that can accommodate the fair’s 110 vendors and still provide visibility and shelter from bad weather.

The fair would fit on grass at Waterfront Park, but unpredictable October weather could lead to disaster for the 10-foot-by-10-foot tents that vendors use. The parking lot behind CHOP restaurant is used for restaurant-patron parking, and the Sister Bay Lions Club uses the stretch of Mill Road west of Bay Shore Drive for its auto show and food sales.

The SBAA may be able to squeeze the fair into that space by working with the Lions Club, but it would likely result in reducing the fair’s vendors by 15 to 25 sellers. The fair generates significant revenue for the SBAA, with vendors paying up to $300 for a space. No final decision on the fair location was made.

The committee is also investigating options for resurrecting the intervillage bus service. The village operated a trolley in 2017 to alleviate perceived parking issues, but the trolley service was inconsistent and little-used. It did not run in 2018.

Last year the village purchased a 16-passenger bus with two handicap seats from the Department of Human Services for $8,000 and tasked Howson with researching the feasibility of restarting the service in the village.

“We did a transportation survey of local businesses and got very little response,” Howson said. “If we did run the service, we’d have to market it a lot more.”

The committee did not make a decision on the service but will continue researching possibilities.