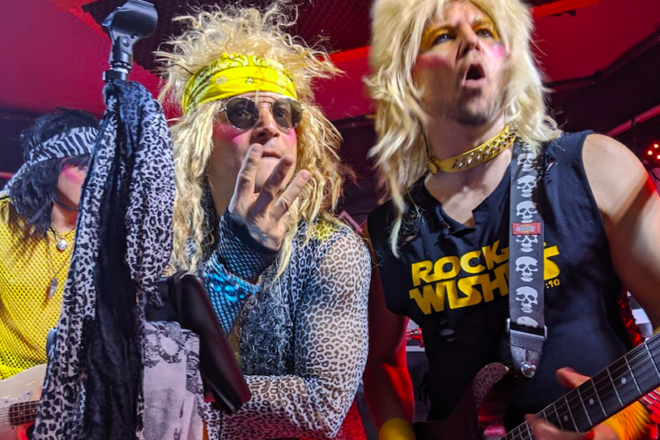 The Glam Band. Photo courtesy of the band’s Facebook page.

Wondering which styles of music to expect at Fall Fest? Here’s a snapshot of the bands playing this weekend to help you get an idea of who the country stars are, who will be playing the polkas and where to find your rock ’n’ roll fix. Find the full music schedule – with the times and locations of each performer or group – here.

Bless ’em, because Sneezy is coming from Chicago and bringing a set of uplifting, chill, happy, original tunes to Fall Fest twice throughout the weekend. There’s a good chance Sneezy will make you smile.

Talk about a mix of sounds! This five-piece band is also ready to party twice this weekend, featuring covers that range from reggae to funk to rock, plus some originals. You’ll hear music from artists such as Bob Marley, the Red Hot Chili Peppers, the Rolling Stones and more.

This original reggae group is back after appearing at last weekend’s Pumpkin Patch in Egg Harbor. Unity is an eclectic group of musicians who want to spread love and unity in whatever community they touch. There will be plenty of love to go around this weekend, too.

This six-piece group from Green Bay, fronted by three lead female vocalists, is sure to deliver an energetic set full of crowd favorites. The Cougars’ inspirations range from Janis Joplin to Bruno Mars to Aerosmith.

The Glam Band comprises six guys with a love of ’80s hair metal who dress the part. The band plays only a handful of dates a year and puts on one hell of a show. Don’t forget your Aqua Net!

Meyer is a Door County favorite who performs in the Florida Keys during the winter. He’s here solo, performing a variety of hits from artists such as the Eagles, Allman Brothers and Van Morrison; then performing as a trio with Kenny James and Reverend Fish.

This is Door County’s own five-piece powerhouse. Playing more than 50 years’ worth of country hits, all-time favorites and originals, you’ll be tapping your toes and singing along.

Everybody in Door County knows Big Mouth, and if, by chance, you’re among those few folks who don’t, it’s time you made the acquaintance. These guys have been tearing up our peninsula since most of our bartenders were babies, playing an eclectic mix of blues, jazz and original music. And there are about 100 reasons why they’re still going strong.

Jerry Voelker and the Jolly Gents

The band has played for 50 years and is going strong, playing in the Midwest, Russia, China, Mexico, Europe, Hawaii and on numerous cruises. The five-piece band plays a variety of styles, including Czech, German polkas and waltzes, and modern jitterbug and polka masses. Get your dancing shoes ready.

Maloney and his band will be in their element Sunday. After spending multiple summers gigging at the Sister Bay Bowl and the Garage at Husby’s, they’ll feel right at home playing their variety of rock and country.