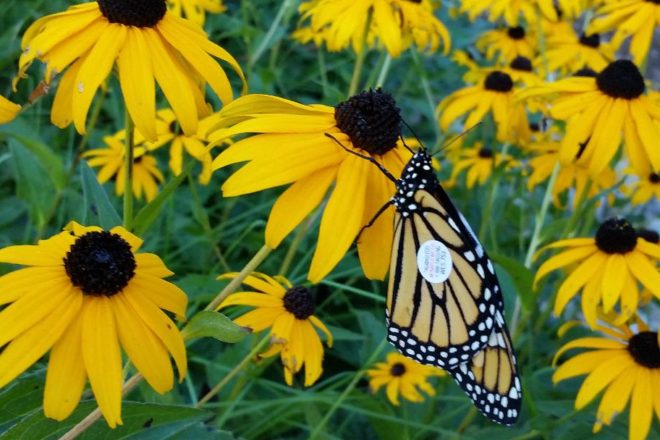 This monarch carries a tag from Monarch Watch (monarchwatch.org), a large-scale, citizen-science tagging project that began in 1992 to help understand the dynamics of the monarch’s fall migration through a mark-and-capture program. Submitted.

It seems everyone loves monarch butterflies – arguably the most charismatic insects in North America. Certainly these black and orange creatures are gorgeous, but many butterflies are beautiful. Monarch caterpillars feed exclusively on one plant, but that’s true of almost all butterfly species. They probably spread pollen from flower to flower, but monarchs are not important as pollinators and their contribution to the food web is negligible.

But monarchs are unique because they migrate, and residents of the Door Peninsula are in an important position to help perpetuate this remarkable phenomenon of monarch migration.

“A billion monarch butterflies once fluttered across the North American landscape, representing one of the greatest migration phenomena in all of nature,” according to the U.S. Fish and Wildlife Service. “Over the last 20 years, their numbers declined precipitously.”

A world-renowned monarch expert, the late Lincoln Brower, studied the monarch overwintering site in Mexico beginning in 1977. Each summer, he conducted research in Newport State Park, and on several occasions, he presented lectures at Crossroads at Big Creek.

“The dwindling monarch butterfly winter residence in Mexico is ominous,” he said during his final Crossroads presentation. “But to blame the low numbers of monarchs solely on what is happening in Mexico is misleading. The historical decline has multiple causes.”

According to Brower, the primary threats are loss of habitat in Mexico, farming practices in the central United States, habitat fragmentation and decreases of biodiversity here in the summer range.

People throughout the continent have responded to the threats and have endeavored to provide food and shelter for monarchs and other pollinators. In most parts of the Midwest, the best way to help monarchs is to plant milkweed, the only plant on which the females lay their eggs. Here in Door County, milkweed plants thrive, and monarchs are breeding well, producing two or even three generations during the summer.

“The brain of a butterfly is about the size of a pinhead, and yet the minicomputer inside that pinhead has all the necessary information to guide them from here to a small forest in the mountains of Mexico,” Brower said.

The Ice Age glaciers formed the Great Lakes: daunting obstacles for fragile butterflies. But the glacial ice also carved out the Niagara Escarpment and an assortment of peninsulas, bays and islands.

The monarchs that were born during the late summer in Ontario and Michigan’s Upper Peninsula tend to funnel onto the Stonington Peninsula near Escanaba, where they gather in huge numbers, roosting at night in the dense arborvitae trees.

Even though they have never flown the route to Mexico before, monarchs somehow know to use peninsulas as bridges in order to shorten their water crossings.

When the winds out of the north create thermal updrafts, they can gain altitude and glide to the Garden Peninsula and then, using islands like stepping stones, on to the Door Peninsula.

Using our peninsula as a stopover, monarchs fatten up on flower nectar for their journey south. They will have less luck as they glide over the agricultural areas of the Midwestern states. It used to be that the monarchs weighed five times more when they arrived in Mexico than they did when they left their breeding areas. Now Midwestern agricultural practices have practically eliminated wildflowers, so monarchs are lucky if they have enough stored fats to survive the winter.

To truly help monarchs, residents can wait a few weeks before mowing wildflowers such as goldenrod and asters. Better yet, plant a variety of nectar-rich flowers that will bloom around Labor Day and into the fall to help both migrating monarchs and our wild and domestic bees to survive the impending winter.

In the Great Lakes Region, the Door Peninsula is an integral stopover site for monarch butterflies. By providing fall flowers, the people of this peninsula can help perpetuate the unique and threatened phenomenon of monarch migration.

Coggin Heeringa is the program director and naturalist at Crossroads at Big Creek in Sturgeon Bay and the vice president of the Wild Ones of the Door Peninsula.