Haven’t gotten a chance to see the great comedies, thrillers, and tragi-comedies on stage at local theaters this season? This weekend is your last chance! The following excerpts are from the Peninsula Pulse’s coverage of this season’s shows. Catch ‘em before the final curtain drops! 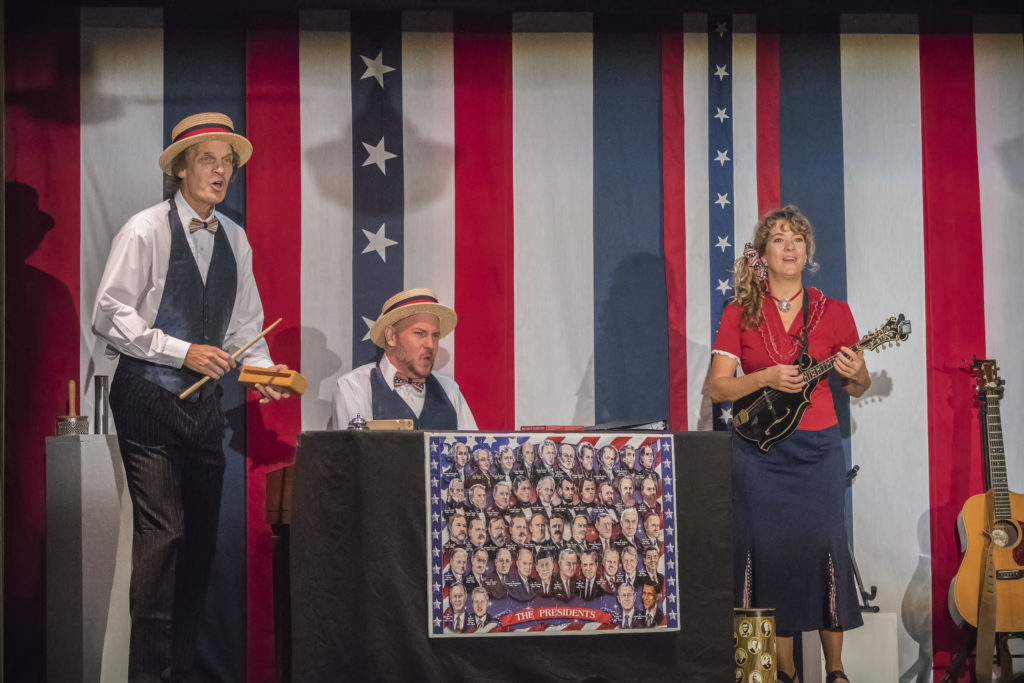 Appearing on the stage of the historic Gibraltar Town Hall in Fish Creek that has been festooned with stars and stripes banners for the occasion, Northern Sky veterans Jake Endres, Jeff Herbst, and Karen Mal present a town hall campaign stop for virtually every presidential race, beginning with that of George Washington.

The fast-paced production includes a chronological survey of campaign songs sung by the talented trio in their patriotic attire. They accompany their unplugged performance with piano, stringed and percussive instruments, taking advantage of the lively acoustics in the hall.

A presidential election is certainly serious business, as we have seen in the past that a new president can alter the course of our nation’s future, sometimes with consequences that endure long after that elected official’s term in office. But at the same time political campaigns are often seasoned with hypocrisy, bad taste, and unsettling gaffs; the Mother Teresa-types of the world seldom run for political office. And when the mud (or worse) is slung, we can be outraged, or we can laugh.

The current Northern Sky production shows that the latter is more fun. And If Elected runs through Oct. 16 at the Gibraltar Town Hall in Fish Creek. For information and tickets, visit northernskytheater.com or call 920.854.6117. 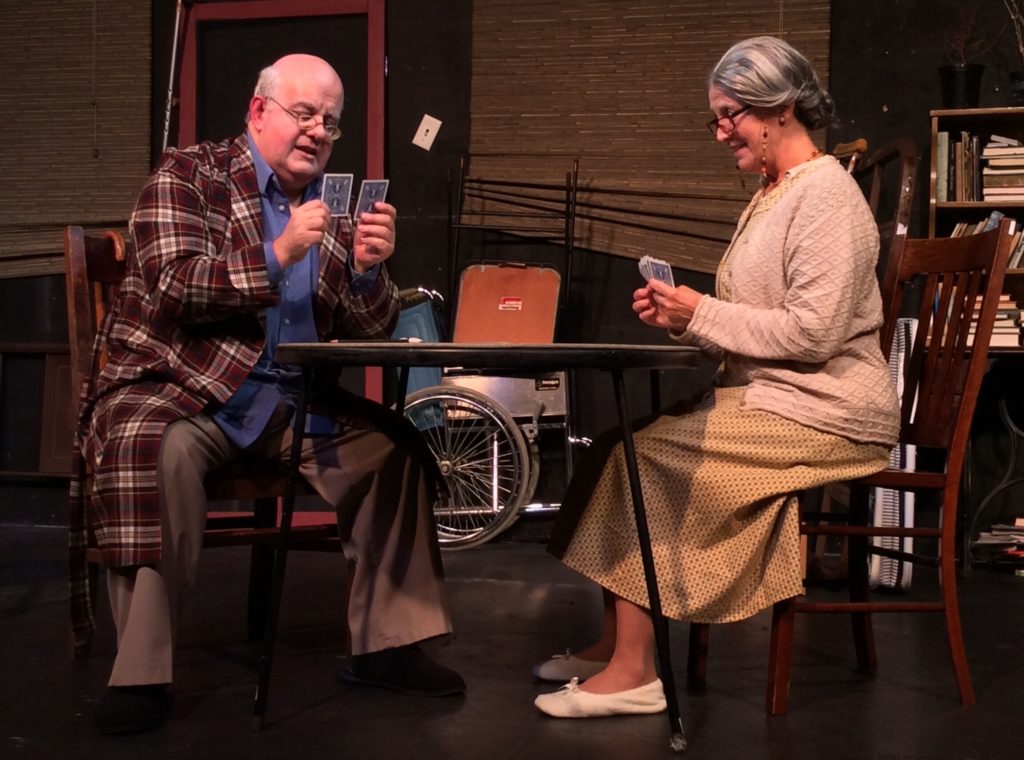 Weller Martin (Drew Brhel) decides what to discard in ‘The Gin Game’ (with Claire Morkin as Fonsia Dorsey), now through Oct. 16 at Third Avenue Playhouse. Photo by Ed DiMaio.

The New York Times called The Gin Game “the closest thing the theatre offers to a duel at 10 paces.” It was Donald L. Coburn’s first play, and it won the Pulitzer Prize for Drama and the Tony Award as the best play of 1978. And now The Gin Game has come to Door County.

“It’s the story of two elderly people trying to live out their remaining years with dignity in spite of living in less-than-ideal circumstances,” said director Robert Boles. “Weller Martin and Fonsia Dorsey engage in conversations about their absent families and what they did in their earlier lives. They seek to find a connection, but the traits that isolated each of them in earlier years and put them, friendless, in an old-age home, continue to isolate them. Although there is unspoken fondness, little by little, each conversation becomes a battle, both of them trying to expose the other’s weaknesses, to belittle the other’s life and to humiliate one another.”

The Gin Game runs through Oct. 16 at Third Avenue Playhouse. For information and tickets, visit thirdavenueplayhouse.com. 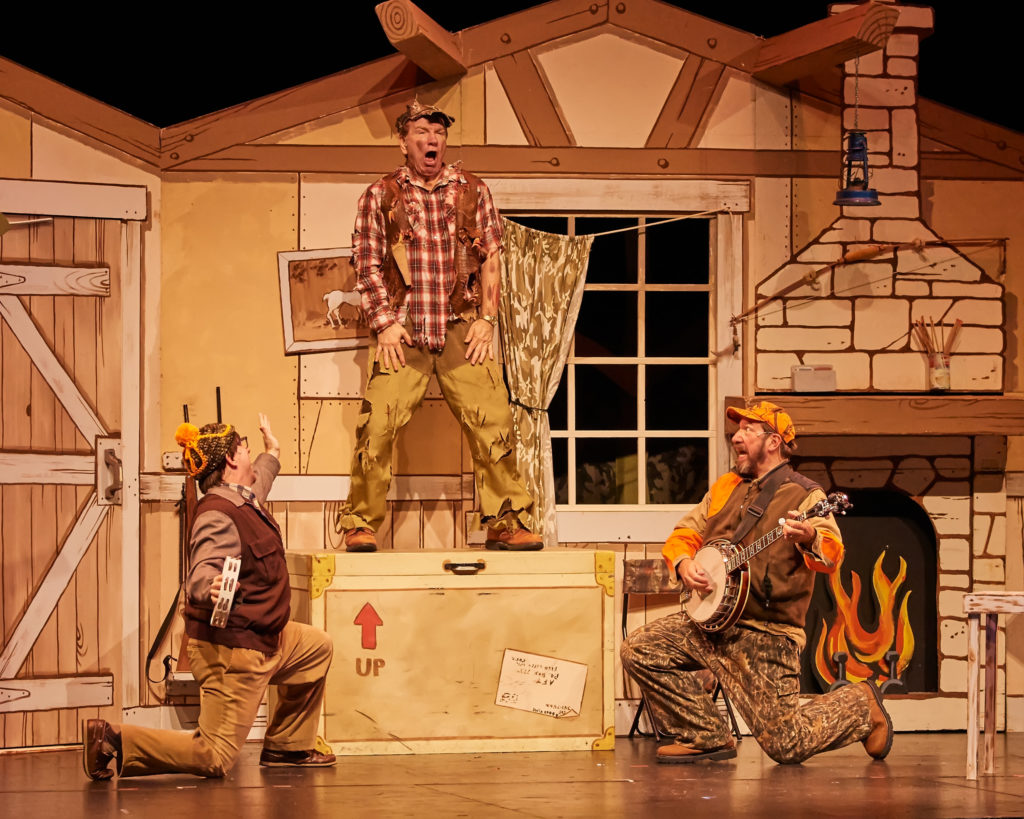 Northern Sky actors Lee Becker, Doug Mancheski and Frederick “Doc” Heide return to the stage in this fall’s production of Guys and Does. Photo by Len Villano.

Northern Sky Theater is highlighting its fall season with the return of Guys and Does, a quirky comedy musical celebrating Wisconsin’s deer-hunting culture.

Guys and Does follows Nekoosa paper mill worker Fritz Dingleheimer as he embarks on a trip up north with his daughter’s oddball boyfriend, Duane Puddles, a terrible hunter whose hobbies include knitting, self-help books, and watching Oprah.

When the men arrive at their northwoods retreat and a Texas big-game hunter by the name of Joe Jimmy Ray Bob Johnson III shows up in pursuit of the most exotic game he can find, the play takes a look at the deeper elements of hunting and its role in history, particularly manliness, bonding and the Native American understanding of nature. Add in a few surprise characters and 20 musical numbers, and Guys and Does becomes a play that can help bridge the gap of understanding between hunters and non-hunters.

Guys and Does runs through Oct. 15 at the Door Community Auditorium. For information and tickets, visit northernskytheater.com or call 920.854.6117. 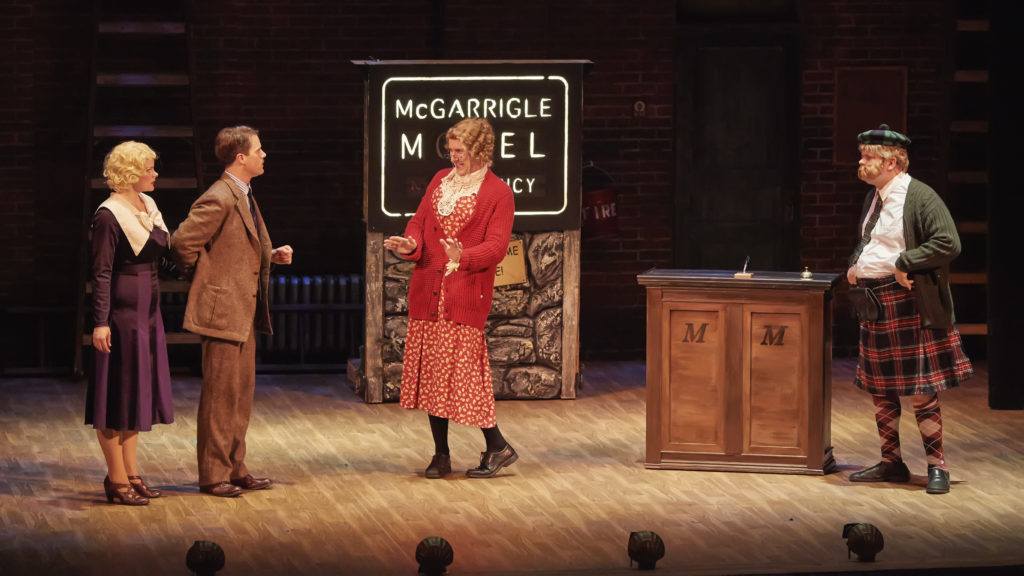 Peninsula Players Theatre is ending its 81st season with a boisterous nod to The Master of Suspense, Alfred Hitchcock, with its final play of the 2016 season, The 39 Steps.

The 39 Steps is a comic spy thriller adapted from John Buchan’s 1915 novel and Hitchcock’s 1935 film of the same name. In 2005, English playwright Patrick Barlow adapted the original concept of using four actors to portray the film’s more than 150 characters.

Set in 1930s England and Scotland, the story begins with handsome Canadian Richard Hannay, who sets out to a London theater to see a show about the incredible recollector, Mr. Memory. Within minutes, gunshots ring out and in the ensuing panic, a mysterious woman sitting next to Hannay begs him to take her back to his flat. There, she admits she is a counterspy being pursued by assassins for her knowledge of their plot to steal British military secrets.

But when the woman is murdered in Hannay’s apartment, he quickly flees and his fast-paced comedic journey to clear his name of murder, evade the police and assassins, and save his country begins.