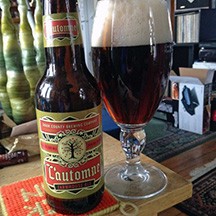 I have gone on record as a fan of fall. Perhaps it is a melancholic nature, but beautiful decay deeply stirs my heart. Maybe that is why I am such a fan of big, unabashedly malty fall beers, such as that old standby, Oktoberfest.

Door County Brewing Co. is now in a position to give thought to seasonals, beginning with L’automne, which hits the streets Sept. 1.

Here is the first thing to know about this lovely new beer – room temperature brings out all its beautiful, shadowy, melancholic notes, and they are many. Don’t make the mistake of drinking it straight from the fridge. Let it warm and reap the benefits of wise beermaking.

It hits all the right notes of an autumnal beer, yet it’s unlike any fall seasonal in my memory save Capital’s Autumnal Fire, which I once described as liquid candy.

L’automne is its own thing. It’s not an Oktoberfest or pumpkin beer, yet it represents the season as well as either of those much replicated representatives of the fall.

I love the idea that Danny McMahon and Door County Brewing have found their own path through this crowded craft beer love fest. Damn the torpedoes! Full speed ahead!

I thought I’d had every Anchor product out there, but, no. I recently discovered that Anchor has an India Pale Ale.

Hopped up American IPAs make me yawn because of their sameness. Hop domination does not make for a good beer. Period.

It’s as if we have two extremes today – the people who really don’t like the taste of beer drink light beer or overhopped beers. Same thing, but at different ends of the spectrum. 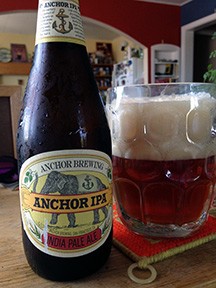 But give me a traditional English IPA and I am happy. Even with higher hop content, the malt remains part of the balancing act.

If they are such great beers, why don’t more brewers make traditional IPAs, you ask? It’s easier to roll with the trend of overhopping. Who will ever know if you made a mistake if you make beer that tastes like a mistake?

A well-made IPA is a thing of beauty. Would that be the case for Anchor IPA, or have they, too, jumped on the trendy and repugnant bandwagon of blowing hops way out of proportion to the rest of the ingredients?

I poured mine into a wide-mouthed English pint mug and was greeted with a lovely floral hop aroma that stimulated my taste buds.

After reading the fine print on the neck label, I learned that this is indeed a new (2014) beer from Anchor. They infused two-row barley with fresh hop cones (the bottle label does not name the hop varieties used, but their website does) – Hops: Cascade, Bravo, Apollo; Dry Hops: Cascade, Apollo, Citra, Nelson Sauvin, Haas Experimental No. 431.

A distinct hop bite prickles the palate. I try to force my taste buds out of the prickly desert to search for any hint of that balance of maltiness that a great IPA displays. I don’t know. Maybe it’s there. Let me take another sip. Another assault of sharp hop prickles. I like at least some semblance of malt in my IPA.

When I don’t examine this beer on my palate and just slosh it down, it tastes just fine. Not a bad beer by any means. I’m sure American IPA fans will love this hop on the bandwagon by Anchor Brewing Co., but me, I’ll take a Worthington’s White Shield, please.