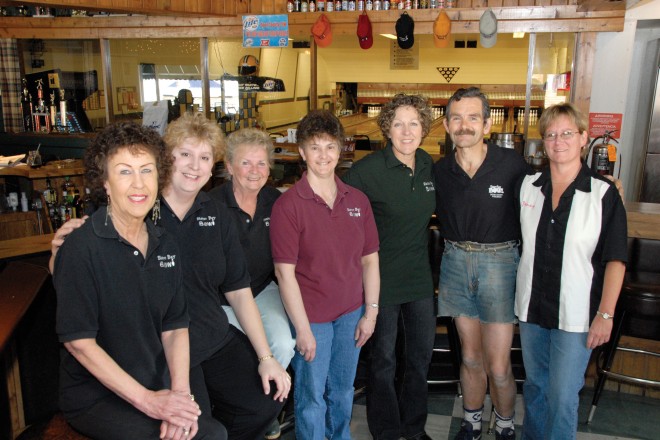 The old adage “good help is hard to find” might be true when it comes to staffing a restaurant. Of course, there are always exceptions, and the Sister Bay Bowl is one of them.

“The Bowl,” as it is called by locals and longtime visiting patrons alike, has long had a reputation for giving ample portions of food at reasonable prices, great service, and a family-friendly, laid-back vibe that many restaurants advertise, but few effectively supply. Part of the Bowl’s success on these fronts is because of something you rarely find in the restaurant business:  the long tenure of its staff.

The total number of years of service of Sister Bay Bowl employees is near impossible to calculate. Three waitresses at the Bowl, Annette Olson, Tammy Anderson, and Carol Pinkalla, have a combined total of 80 years of service. Rhonda Godreau, a cook and the Bowl’s longest-tenured employee, began making salads at 13 and has stayed on in the kitchen for 34 years. In addition, head cook Brad Lindenberg and cook Chris Reichel have been there 15 and 10 years, respectively. Lelia Anderson, who began as a busser, has been there for 33 years. And of course, there are many other employees who have been there for stretches of 5, 10, or 15 years.

“We serve simple, good food – and we serve it well. We should – most of us have been here long enough,” jokes Sharon Daubner, whose grandfather purchased the Sister Bay Bowl as an investment back in the 1940s after moving from the Brussels area of the county to Northern Door. Back then, the Bowl was the Sister Bay Hotel, which had been a familiar landmark in the town since 1917. Sharon’s parents, Earl and Rita Willems, bought the hotel from Earl’s father in 1950. In 1958, the dance hall of the hotel, which had been a popular Saturday night hotspot among the locals, was torn down to accommodate a six-lane bowling alley. Six years later, the Willems family’s living quarters were turned into the Bowl’s existing dining room, and the transformation from Sister Bay Hotel to the Sister Bay Bowl Supper Club was complete.

The Willems family still operates the Sister Bay Bowl today. Sharon was 13 years old when she began working alongside her parents at the restaurant and this summer marks her 43rd season of working at the Bowl. Even though Earl and Rita are now retired from the day-to-day obligations of the restaurant, they still help out whenever they can. Sharon and her siblings, Gary, Penny, and Steve, all share in the ownership and management of the restaurant. They also share in obtaining help for the restaurant, as all of their children have worked at the Bowl in some capacity, with Sharon’s son Mike operating as the Bowl’s bar manager.

In fact, the more one hears about the staff of the Bowl, the more family connections  come  out  of the woodwork. Carol Pinkalla, a waitress who has been at the Bowl on and off since 1980, initially secured the job through her daughter Lisa, who worked there at the time. “All my daughters have worked at the Bowl,” she says. Annette Olson, who marks her 34th year at the Bowl this summer, estimates that at least 16 mother-daughter teams have worked at the Bowl throughout the years. Sharon Doersching, a middle-school English teacher at Gibraltar who has also worked summers at the Bowl for 26 years, says, “We’ve had every possible family combination – fathers and daughters, mothers and sons, everything. I’ve had 10 year-old kids of employees tell me that they can’t wait until they’re old enough to begin working at the Bowl.”

Those kids might have to wait a little longer than expected. “Back when I started working, the Sister Bay Bowl was one of the only places you could find year round work,” says Tammy Anderson, who has worked at the Bowl for 20 years. “When I got hired, I had to bus tables for six years before I became a waitress. There was actually a waiting list for the waitress shifts! It’s always been a popular place to work,” she laughs.

Another story involves an unusually bad snowstorm that made it impossible for the employees to get home after work. So, they did what anyone might have done:  camped out at the Sister Bay Bowl for the evening.

Inevitably, there is the question of what has made these employees stay at the Bowl for so many years. The answers are the same across the board. “We have the best employers,” Tammy Anderson says. “They are behind you 100 percent – both personally and professionally. And because of that, we’re behind them as well. If you’re snowed in and can’t get to work, they will come get you. If the electricity goes out at the restaurant, we’ll stay and wash dishes by hand. We try to take care of each other.”

Being the self-proclaimed “Oldest Waitress in Door County,” the 67-year-old Carol laughs and says, “Well, because I’m too old to learn the routine somewhere else! In all seriousness, we’re a close-knit group. We have a lot of fun together. We have a lot of respect for one another. The boys in the kitchen even know not to turn on their junk music until after I leave.” Lelia agrees, saying, “We’ve been through a lot of great times together. I really enjoy working with everyone. I would never give that up.”

“We’ve endured a lot of things as a group – sickness, marriage, children, and deaths. We’ve had our share of ups and downs,” Tammy says. “In that way, we’re as strong as any family. And really, our family grows with every new person that comes in to eat at the Bowl. I’ve forged many friendships with people I’ve waited on throughout the years. The other girls laugh at me, but with most of our regulars, I know what they’re going to have to eat and drink the minute they come through the door.”

“The best part of working here is that our food is consistent. I like being able to service a customer and know that they will always be satisfied with the quality of our food as well as the quality of our service,” says Annette. Sharon agrees, saying that is usually the compliment most received from customers. “I can’t tell you how many times we’ve heard, ‘I love the Bowl because it’s the only restaurant I can send guests to and I know they won’t be disappointed.’ We all love working here, so hearing things like that only makes it better.”

Whether you’re coming to the Sister Bay Bowl for a cup of homemade chili and a Bowl Burger (an unofficial poll rates them as some of the best burgers in the county), the popular perch or whitefish fry, or a generous cut of steak or prime rib done to your liking, chances are you won’t go home hungry. And you’ll most likely leave with many new friends.