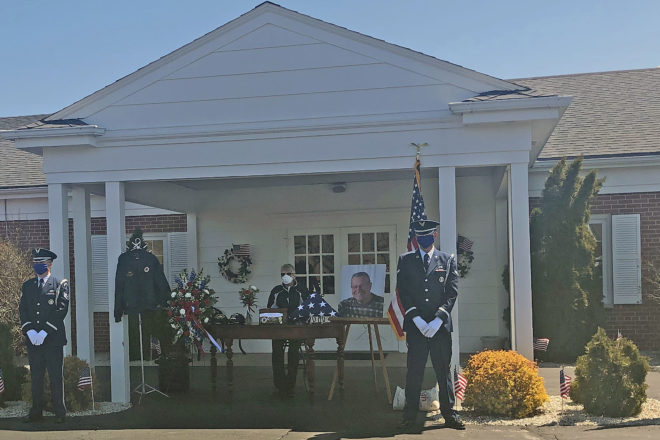 After a 27-year career in the United States Air Force, Joseph Heilman spent decades supporting and helping to honor veterans back home in Sturgeon Bay. He served as commander and vice commander of AMVETS Post 51 in Sturgeon Bay, helping to ensure that area veterans were properly honored when they died.

But when Heilman died May 1, restrictions to halt the spread of COVID-19 were limiting the services funeral homes could offer. With a limit on gatherings to fewer than 10 people, an indoor service could include only small groups, precluding the opportunity for military honors. Todd Huehns, funeral director for Huehns Funeral Home, said that wasn’t going to be acceptable.

“We had worked with him over the years on other services, and we wanted to honor him,” Huehns said. “This is a guy who was very well respected, who would have had hundreds of people at his service in normal times.”

Families grieving during the pandemic face a difficult choice. Several outbreaks of COVID-19 have been traced to funeral services, where attendees shake hands, hug, kiss and cry together in large groups in tight spaces – a playbook for spreading the virus. In response, funeral homes have instituted a laundry list of measures to improve safety, including limiting the size of gatherings, wearing masks, sanitizing surfaces and requiring social distancing. It’s a difficult change for a business in which personal connection is paramount.

“The families we work with are in the older age range, and we need to make this whole process in service planning as safe as we can be,” Huehns said. “When the orders came down, one of the first things we did was start keeping a distance from people. It’s hard, because you know everybody here and they are your family, your friends.”

Huehns said that at least six families have chosen to delay services until the fall in hopes of having the opportunity for a more traditional service. For those who do move forward, the grieving process looks much different. On March 19, Rose Mae Vandertie’s 61-year-old son, Gary Vandertie, died of a massive heart attack. When Mark Forbes of Forbes Funeral Home informed Rose Mae that she could have only a small in-person family service, she was distraught. She wanted a mass for her son.

“It’s terrible, just so sad,” she said. “We never had a funeral in our family where we couldn’t all go to a church full of people.”

Forbes said the past two months have been extremely challenging.

“We really feel badly for these families because a large part of the grieving process is gathering and sharing your grief,” Forbes said. “We’re trying to give families an opportunity to come in groups of nine, and trying to be good citizens. In our role, we’re all about caring for the public.”

Forbes got creative, live-streaming the service with Fr. Edward Looney officiating. A relative showed it to Rose Mae, and friends and family called her from across the country to say they’d watched it. It wasn’t the same as gathering with all of her son’s friends and family, but she said it helped her take a step forward in the grieving process.

“It was a beautiful, beautiful mass,” she said.

Huehns said not all families are accepting the restrictions.

“You try to advise and give expertise, and you have the old guard, the old generation who say they have lived through many things, and this just isn’t that big a deal,” he said. “You get some people who attend who are a little upset. It’s difficult, but I’m doing everything I can to create that safety for people and our staff.”

For Heilman, Huehns designed a modified sendoff for a man who had given so much of his time to his community and his fellow veterans. Huehns moved the funeral outside, allowing visitors to drive up in their cars to pause and salute Heilman’s family, followed by a final salute by AMVETS Post 51 members and military honors from active-duty Air Force personnel, all streamed on Facebook for others to watch.

Janel Beihoff, Heilman’s significant other for the last 22 years, said she was overwhelmed.

“There are so many things you have to take care of, and when you’re alone, it’s more difficult,” she said. “But we all have to be protected. If Joe was looking down, he was impressed. He got his sendoff.”