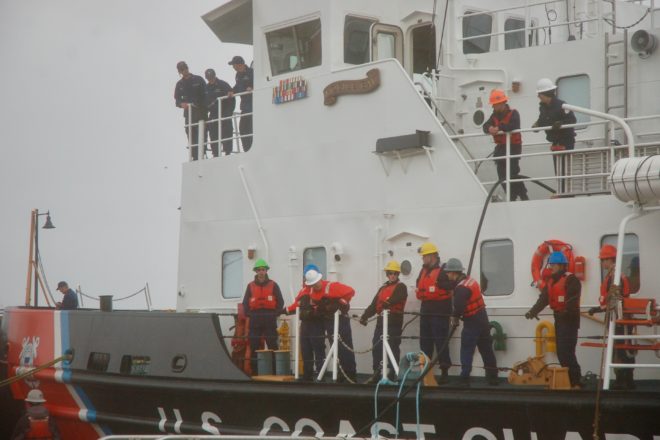 It was a moment of déjà vu for Tom Baudhuin when the Coast Guard cutter Mobile Bay returned to its home port of Sturgeon Bay on a chilly Halloween day.

Baudhuin, a Sturgeon Bay native, was one of the original crew members of the Mobile Bay when it first arrived in the city on Nov. 3, 1979. On that chilly day, Baudhuin’s father – holding his five-year-old grandson, Baudhuin’s son – greeted Baudhuin’s arrival.

Forty years later, Baudhuin was holding his five-year-old grandson while welcoming the Mobile Bay and its crew after the 140-foot icebreaking tug had spent more than a year at the Coast Guard boatyard in Curtis Bay, Maryland, undergoing updates for another 15 years of service.

Baudhuin said that as a member of the original crew, it was important for him to be there for the Mobile Bay’s return, despite the cold and snow.

“We’re just a few days shy of its original arrival,” he said, recalling that it was also a cold, gray day 40 years ago, but without the snow.

Also waiting dockside for the icebreaker’s arrival were family members of the crew.

“Totally excited, nervous,” said Kristin Moats, wife of crew member Jason Moats. “They’ve been gone for a few months, and this is just so exciting to finally have the guys home, and the ship home after a year.”

The Sturgeon Bay High School band performed on the Oregon Street bridge as the Mobile Bay entered the Sturgeon Bay canal; then the band moved to the docking area in Sawyer Park to play as the icebreaker docked and the crew was reunited with family members.

The Sturgeon Bay Fire Department flew a large American flag from a ladder truck in honor of the arrival, and community members also gathered for the return.