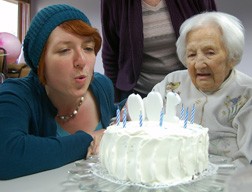 Corrine Lea blows out candles for her grandmother, Frances Miller, during a celebration of Frances’ century on Earth on May 17. The 100th birthday celebration was held at First Baptist Church, Sister Bay, where Nor Door Adult Day Services is held three days a week.

In a century of life, Frances Miller has been a popular Milwaukee-based accordion player, a wife and mother, a seamstress, silversmith, weaver, woodcarver and gourmet cook and baker. In 1958, she helped her sister and brother-in-law transform the Lakewood Lodge (today known as the White Gull Inn) into the popular establishment it is today.

That full life was celebrated with family and friends on Friday, May 17,  at the Nor Door Adult Day Services at the first Baptist Church in Sister Bay.

Frances’ only child, Renny, was in attendance with her husband, Dave Lea, and their daughter, Corrine Lea.

Renny said the music that played such a large role in her mother’s life is now a form of communication for the two of them.

“I know all the old songs. We sing them. That’s the way we communicate now. We sing a lot,” Renny said. “It’s harder for her to express herself. She has dementia. But when we sing, she can really relate to that.”

While Frances can still play a keyboard, Renny said the accordion is too heavy for her now. However, you can see Frances in her last public performance during an accordion fest held several years ago in Institute [http://www.youtube.com/watch?v=MluSGaaX218].

Renny said the family was happy to celebrate Frances’ 100th birthday with the folks at the Nor Door Adult Day Services.

“It’s a godsend to the caregiver,” Renny said.

The Adult Day Service, run by N.E.W. Curative Rehabilitation, Inc., of Green Bay, is open Monday and Tuesday from 11:30 am to 4:30 pm and on Friday from 8 am to 4:30 pm. For more information, visit newcurative.org.