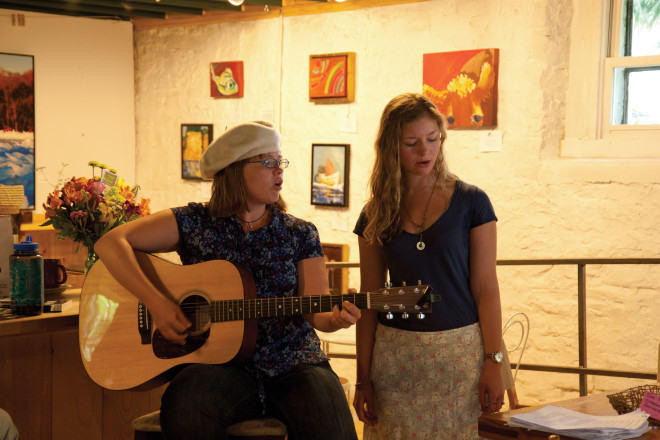 On any given summer day, you might find Katie Dahl picking cherries on her family’s orchard north of Sister Bay or singing about the same fruit trees before a packed house of adoring fans.

This singer-songwriter is by no means new to Door County, where she has been a smiling face all around performing arts venues since she was a child. But now, a year after the release of Katie Dahl’s first 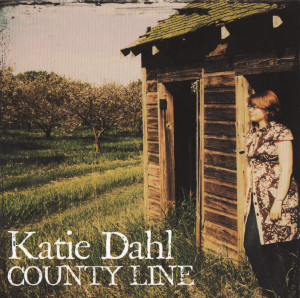 album, County Line, the crowds Katie plays for continue to grow above and below the Door/Kewaunee borderline. With a voice time and again compared to honey, and her melodic guitar-picking behind it, Katie reflects on family, love, and history, often set against a Door County backdrop, in her original songs. Katie’s career as a solo performer is relatively new, and this Renaissance woman credits much of her inspiration to summers above the county line.

Raised in the Twin Cities, Katie grew up singing with her mother in church, and she says, “My mom always listened to really great folk music – Alison Krauss, Mary Chapin Carpenter, Kathy Mattea.” But her love of music compounded every summer of her childhood when she visited her grandparents on their orchard farmhouse off of Highway 57. In Door County, Katie went with her family to American Folklore Theatre (AFT), which featured folk musicians as actors. One influence that Katie will never forget was AFT’s 1994 production of Goodnight Irene at the Ephraim Town Hall. In describing the show, which celebrated the music of The Weavers, she talks about the actors’ passion for the message in the music. “It was so related to social change, and it was effective,” she says. “That was when I got the folk music bug, and I started listening to everyone I could.”

Still, she didn’t consider sharing her love of music with an audience. When she thinks back to college and the question of what she would do after graduation, she says, “I would tell people, ‘Well, if I could do anything, I would be a musician, but since I can’t do that, I think I’ll be a teacher.’” Besides the fact that she also loved teaching, Katie is not sure why she didn’t see herself performing, except that, as she 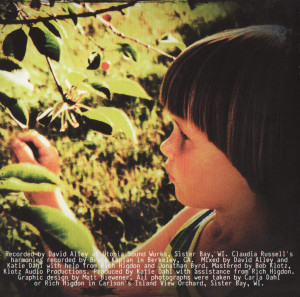 says, “I tried writing a song my freshman year, and it was horrifically bad.” For anyone who has heard Katie’s original music, or read any of her pieces that she regularly writes for such publications as the Peninsula Pulse or this one, this statement will be as amusing as it is hard to believe.

When she was 19, Katie slipped on the ice and broke her wrist, and this was just the push she needed to set down her oboe and learn the guitar, holding a pick with her stiff right hand. That summer, following her love of the arts and her strong desire to be back in Door County, she interned at Door Shakespeare, where she was thrown headfirst into being a performer. She played guitar on stage for the plays, learning new chords, stage presence, and how to run through the forest with an instrument. “It made me go outside of my comfort zone because I had to play in front of people,” Katie says, and she is grateful for the opportunity, one of the many when others took her more seriously than she took herself and propelled her forward.

It was at Door Shakespeare that Katie Dahl realized that Door County was filled with music at every level. “People play music around bonfires, and singing at those bonfires with my guitar, I had an audience of people I’d admired since I was a kid. That motivated me.” She began to pick with actors and professional musicians in Door County, like Karen Mal, Eric Lewis, and Claudia Russell. Katie says of Claudia, who performed regularly with AFT in addition to her own solo tours, “I had admired Claudia so much as a singer-songwriter, and getting to know her and having her take the idea seriously that I might want to be a singer-songwriter, too, was really important.”

Claudia is based in Northern California, and plays with her band occasionally in Wisconsin. She says, “I’m impressed how Katie’s gone full ahead. She’s really embraced her music fully.” And Claudia, who has been nominated for numerous songwriting awards, speaks as both a mentor and peer of Katie. “Her songwriting voice is pretty sublime, and I love her singing voice – she’s my favorite alto. She can go low!”

Katie has returned each summer as a company member and musician for Door Shakespeare or AFT, gaining exposure and skill. In the winters, she continues to gather the life experiences she can later use to write her original songs. She spent a year fulfilling her other chosen career path by teaching English in France. And she has spent winters in Boston and Chicago, writing music and working at famous folk music venues, Club Passim and the Old Town School of Folk Music, respectively.

With tales of places she’d been and the home far away in Door County she could never get out of her head – and with the blessing of established musicians like Claudia Russell – Katie decided to record her first album in the winter of 2009. 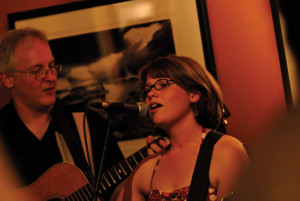 “Here is another instance of other people taking me more seriously than I took myself,” she says, and she is so happy they did. “I was going to make an EP, just to have something to sell at shows. I didn’t have enough songs to record a whole CD anyway.” But Katie was surprised at how much fun it was to record, and suddenly it was a much bigger project than she’d anticipated. Surrounded by many favorite local musicians to back her up on her recordings, Katie wrote more songs and made a full-length album.

For much of the winter, Katie worked in the Sister Bay recording studio Utopia Soundwurks, run by Dave Alley. Dave instructed her in every step of the process, from recording initial tracks to mixing the sounds. “Making a CD is a process that builds its own momentum. It was a process that, when I was done with it, it had catapulted me unwittingly into the world of people who make music,” she says.

Of her album County Line, Katie says, “It felt like a good time marker, literally a ‘record,’ of where I was as a musician at that point.” But she hasn’t stopped, and this past summer, while playing gigs all over Door County and beyond, she continued to write new material.

In her lyrics, Katie’s sense of place remains strong, as in the new song “Hometown Tables.” The chorus epitomizes Katie’s wise and warm outlook:  “I’ll break my bread at hometown tables in the company of friends.” Katie is winning fans with her genuine love of music, home, and history, her laugh and her storytelling. When Claudia Russell describes Katie as a musician, she says, “She’s like a redwood tree. She’s going to be around for a long time. She has that kind of growth in her.”