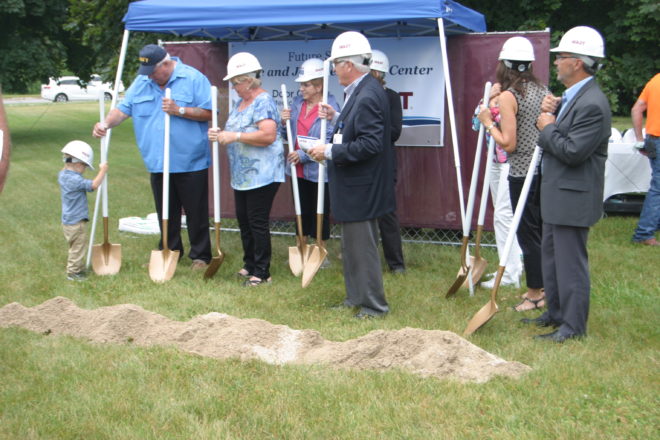 Pete and Jelaine Horton, left, get help at the groundbreaking ceremony from their 3-year-old grandson Jack Henry Horton. Photo by Jim Lundstrom.

Pete Horton’s memories of his family’s last Christmas with his mother inspired him and wife Jelaine to provide a $2 million jumpstart for the $9.5 million, 25,000-square-foot skilled nursing facility and hospice center, for which ground was broken July 12 on the Rhode Island Street side of the Door County Medical Center grounds.

“We’ve wanted to do this for a long time,” Pete said after the ceremonial groundbreaking. “It’s going to be great. What other county needs hospice beds like we do?”

He mentioned that his mother, Ethel Horton, got Pete and his wife Jelaine involved in fundraising for a hospice facility in his hometown of Valparaiso, Indiana, which was named for his parents, the Arthur B. and Ethel V. Horton Hospice Center.

“We thought she was nuts, but we helped her out,” Pete said. “It turns out, she ended up there.”

He recalls fondly the Christmas Eve of 2005 when the whole family went to visit his mother in the hospice.

“It was Christmas Eve. The Packers were playing. We have six kids and they all came,” Pete said. “She was so happy to see everyone there, and it was all laid-back. We brought beer. Nurses came in. Beer cans were flying. It was more like home than an institution.”

His 93-year-old mother died in the facility bearing her name just two days later, on Dec. 26, and Pete never forgot what it meant for the family to spend those last moments together in a hospitable setting.

“They needed something done here,” Pete said. “It’s going to be great.”

And in honor of their donation and spirit in moving this project forward, the 32-bed facility will be called the Pete and Jelaine Horton Center.

Construction by the Boldt Company of Appleton will begin Aug. 1, with a June 2019, expected completion date, said Trent Jezwinski, vice president of health care for the Boldt Company. He said there will be as many as 100 contractors and subcontractors working on the state-of-the-art facility.

“Our biggest challenge is trying to get this enclosed by winter,” he said, adding that winter could be October or it could be January, or anywhere in between.

While Door County Medical Center (DCMC) currently provides hospice and skilled nursing care, it is in an aging building (1963) that was not designed for elderly hospice. For example, natural light is scarce, wheelchairs do not fit in resident restrooms, and there is only one large room for activities such as meals and treatments. In short, there is a skilled staff limited by an inadequate facility.

People often note that Door County has one of the oldest populations in the state – the 2015 U.S. Census Bureau lists the average number of people older than age 65 in Wisconsin at 14.8 percent while in Door County it is 25.4 percent. DCMC President and CEO Jerry Worrick took it to another level at the groundbreaking, saying, “We have one of the oldest counties in the United States. So, therefore, we have a special responsibility to provide great services to that segment of the community.”

Worrick also mentioned that the center has been designed to feel more like a home than an institution, with trees and green space surrounding the building.

“Our mission is to improve the health of all in our community, but especially for the poor and the most vulnerable. It is our mission, our duty, to take care of our senior population as they approach the end of their life. Building a new state-of-the-art Skilled Nursing and Hospice/End of Life Facility is the right thing to do, despite the financial cost,” said Mike Herlache, Executive Director of Door County Medical Center Foundation.

Kitchens mentioned that the original plan for the facility was 48 rather than 32 beds.

“They wanted to be bigger and we fought for that,” Kitchens said, adding that the way the state regulates beds for these facilities is “a crummy system.”

“We need to address that, the way these beds are regulated,” he said, explaining that since most of the patients are on Medicaid or Medicare, there is some financial burden for the state whenever there are more beds for people reaching the end of their lives.

“We need to keep up with the need.” Kitchens said. “It’s an economic development issue. We don’t want people to leave the county because of this.”