George Erickson was laid to rest yesterday. He was not a man I knew well. George was a guidance counselor at Gibraltar, where I and five siblings all went to school, though he was retired by the time I entered 3rd grade. I don’t recall meeting him growing up, just seeing him in the halls occasionally and at every graduation. 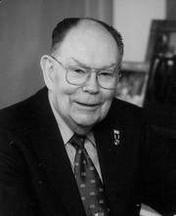 But I would run into him at Al Johnson’s occasionally in recent years, and he would know me, something I appreciated. He’d say hi, always with a warm smile, and invariably ask about my parents or an older sister. I figured it was traditional small talk, with little knowledge of my family behind it.

But a couple years ago I noticed that the house where he and his wife Annette (my kindergarten teacher) lived was being squeezed on both sides by two sprawling condominium developments. I figured there was a story there, and thought I’d call them up and get them to unleash their bitterness toward the rapidly changing Door County world around them.

I was an idiot.

We arranged an interview, and I stopped by their home on a sunny afternoon. I quickly learned I did not have to offer any reminders. George asked about my family, but only as a courtesy. He knew it all, somehow. “Is Christine still in Chicago?” he said. Christine is my oldest sister, who graduated 20 years ago and has only been back to visit since. “She went to University of Chicago right?” He was dead on, and he knew that in the intervening years she had lived in Baltimore for a spell, married, and had several kids. I have no idea how. Our families are not close.

He and Annette knew the general trajectories of the lives of myself and all my siblings, and my parents. Maybe not specifics, but quite a bit. I was flattered that it mattered enough to him to follow up, this wise old sage of our little community.

It was quite the experience, catching up with old friends when you had actually never really met before as anything but passers-by.

Eventually we got to my reason for calling – the construction encroaching on their longtime home. This was going to be good, I thought, and it was. But my pre-conceived story (yes, I had broken a cardinal rule of journalism and framed my story in my head already) fell apart in minutes. He was not bitter. He was not angry. His face only carried the slightest tic of sadness.

He recalled the days when vacation cottages with a single lamp were the new scourge encroaching on the beaches. Then there was fishing, then the orchards. Every couple decades a different industry became his community’s lifeblood, and with each new wave came declarations of its demise. Yes, he missed the woods around his house, but he didn’t refer what was taking the place of those trees as condos.

“These are our neighbors,” he said. “We just wish they were around more often. It gets lonely when we’re the only ones here.”

He expressed his fear that he might not be a great neighbor to them. He wanted to be sufficiently welcoming. This was his home, his town, and in his final years, he was thinking about whether he could fulfill his obligations to his new neighbors.

With George gone, it’s now a little more lonely in Northern Door. Those who have moved into those condominiums next door have lost a wonderful neighbor, and they’ve got a lot to live up to. I’m grateful I sat down with he and his wife that afternoon two summers ago. Grateful to be wrong, and to have folks like he and Annette around, still teaching young pups like me such valuable lessons.