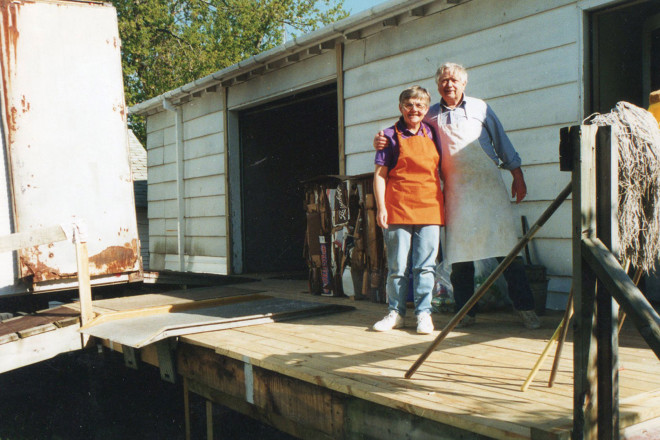 Visitors stopped into Ann and Gary Norz’s deli for sandwiches for decades. Locals didn’t get a sandwich, they got a Norzwich.

The Father of the Norzwich, Gerald Norz, died June 8 at age 78. For 30 years he was a fixture, along with his wife Ann, in the aisles and behind the deli counter at the Fish Creek General Store. 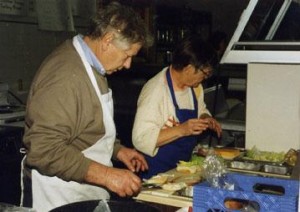 Gerald Norz at his familiar perch at the sandwich station in the deli of the Fish Creek General Store (now the Fish Creek Market). Photo courtesy of Ann Norz.

A few days after he passed, I met Ann and her 19-year-old granddaughter Kelsey Norz, at the farm she and Gerald worked together for 45 years to talk about Fish Creek’s unlikely butcher.

I learned quickly that Ann Norz doesn’t pause. When she talks about her rich life with her husband Geri (pronounced Gary), she speaks with a machine-gun cadence, a smile, and a humble pride.

When she stops, it’s not for lack of memories, or words. She’s up, out of her seat, and searching for books or pictures to illustrate a point.

Ann, it seems, is in a hurry. She’s got ground to cover, and the pauses, if they come, are short-lived. You soon understand why – there’s a lot more to cover than a life in the deli, but that is the ground we cover first.

Before Subway, before Cousins, before Quiznos, Gerald Norz set up a wooden table and a line of meats, cheeses, and condiments, and stood in the deli of the Fish Creek General Store, asking folks to tell him what they wanted.

Summer kids, working at the cottages and stores in downtown Fish Creek, had been asking Gerald and Ann, the store’s new owners, if they could leave their groceries in the store’s cooler, since their own primitive summer dwellings didn’t have refrigerators. 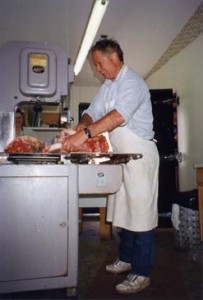 Gerald Norz traveled to Europe and read many books to learn the butcher’s trade when he and wife Ann (in background) bought the Fish Creek General Store. Photo courtesy of Ann Norz.

After a few such requests, Gerald and Ann suggested that they just make the sandwiches for the kids themselves. And so began the Norzwich, essentially an offer to do some kids a favor. That helps explain why anyone who has had a Norzwich – piled high with an obscene stack of meat and cheese – in the 40 years since knows that profit margin has never been the motivation behind the offering.

The sandwiches were priced quite reasonably, and Geri earned a reputation as a man who never skimped on a sandwich.

“If he saw a skinny little guy order a sandwich, he’d say he looked like he needed a little more meat, and he’d put another slice on,” Ann remembered. Later, when it seemed some customers would do well to cut back, they began offering fruit as a side option in addition to chips. “And we always had chocolate chip cookies.”

When Ann mentions the cookies, she pronounces it different, with extra emphasis, as if the sandwich would all be for naught without them. Many a customer would agree. Geri always asked what the customer wanted on their Norzwich, but that didn’t mean he always gave it to them exactly as requested. 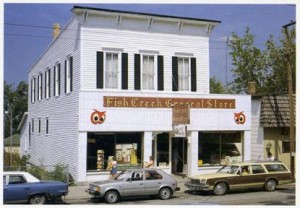 The Fish Creek General Store as it appeared when the Norz owned it from 1970 – 1999. Photo courtesy of Ann Norz.

Geri always felt certain things went together on a sandwich, and other things didn’t, Ann said. She admitted that she, too, sometimes adjusted a customer’s order for the same reason.

Before their small-town life, the young couple bounced around Europe when Geri worked for General Foods after attending the Wharton School of Business. They weren’t on the small business track, but after several moves and the beginning of parenthood, a change was in order.

Kelsey remembered asking her grandpa why they bought the grocery store.

“He told me he just didn’t want to wear a tie to work anymore,” she said. And that was that.

Ann’s parents had a place in Ephraim, and in 1965 she and Geri bought a farm on the corner of County A and Gibraltar Road. They wanted to buy a business they could work all year, and the general store “just seemed like something we could do,” Ann said. But their knowledge base was limited. What did they know about running a grocery store?

“Nothing,” Ann said, shaking her head with a smile. “Except we liked to eat.”

They had to learn in a hurry. Geri picked the brain of Ed Schreiber, who sold them the store, and he hit the books, reading up on the butcher’s trade in a book called Fachbuch; fur das Metzgereigewerbe. Yes, it was written in German. Geri, born in Switzerland in 1931, spoke five languages. English was his fifth, after Swiss, German, French, and Italian.

The Norz traveled to Germany to learn from butchers and they gathered recipes for authentic Swiss brats and sausages, and a potato salad that would become a signature.

In those days, families often stayed for long stretches or entire seasons, and Gerald and Ann got to know them well over weeks, then years, then generations.

“It was the customers that made it nice,” Ann says.

When they decided to close the store for a few months each winter, Geri was able to indulge his ever-curious mind.

In the late 1970s, the man described by his son Gerald Jr. as “the original environmentalist” decided he wasn’t going to wait for others to harness the wind. Long before alternative energy was hip, he read some thick, dense books from NASA and set to work building his own windmill, which he named the DQ, for Don Quixote. He secured a patent, and enlisted the help of friends and his two sons to erect the tower.

Then he began work on an airplane, fabricating wings in the aisles of the grocery store, and using a car motor for power. He and his sons built it, but it never flew. No matter – the challenge, after all, was in the creation. It’s no surprise that his two sons (Charlie is the younger) each became engineers.

Geri and Ann sold the store in 1999 after 30 years, giving them a chance not so much to retire, but to put their energy into the home and farm that had long taken a backseat to the store. They put their passion into beekeeping, harvesting honey on their farm, and teaching their granddaughters to ride horses in the proper English style.

Over the years, Gerald Norz traveled the world, designed and constructed his own windmill, and even built an airplane (minus the air). But his personality is perhaps best reflected in a simple sandwich, devised not for profit, but to fill a need for some neighbors.

The Norzwich lives on today at his old deli in the Fish Creek Market, a staple of Northern Door favored by workers, visitors, and especially the students Geri missed most when he left his sandwich station.

The Father of the Norzwich is gone, but Fish Creek is forever fortunate that Mr. Norz grew sick of wearing a tie.