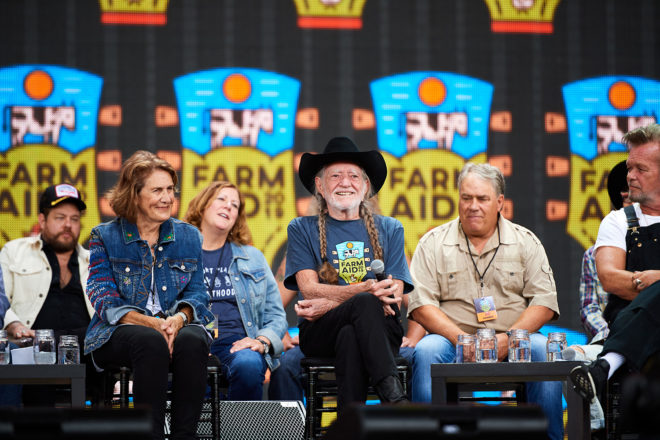 Diversity and resiliency were themes at 34th annual celebration

Was it the end of an era?

It felt like it when Willie Nelson walked on to the Alpine Valley stage for a late-morning press conference to kick off the 34th annual Farm Aid on Sept. 21.

When the 86-year-old music legend walked on stage for the 11 am press conference with his fellow Farm Aid board members – Neil Young, John Mellencamp and Dave Matthews – he looked confused and in pain. He was gasping for breath.

This was only the second time Farm Aid has taken place in Wisconsin, but since 1985, Willie and company have taken the show and the message that farmers are important to different venues to spread the word. And the word is diversity in all things.

Still, you couldn’t help but notice that time has finally caught up with Willie Nelson, one of the great deniers of time.

Willie has been having health problems that caused him to cancel his August shows, which is telling because he has always been a force to be reckoned with in the touring department.

One national reviewer of Farm Aid 2019 for a publication that will go unnamed (Billboard) went on about how it appeared Willie had overcome whatever was plaguing him in August, and he looked great at the press conference.

I’ve seen Willie before. I’ve met Willie. Somewhere around here, I have a photo of me and my now third ex-wife with Willie on his blue bus. He’s a little feller, I can tell you that. Shoulder high or so to me, and I’m not a tall person.

But the real point here is that Willie is vital in that photo from 15 or 16 years ago, and the vitality seems to have left him.

He was asked to deliver the welcome at the press conference. He took the microphone and said in his still mellifluous voice, “Glad to see us all here today in Dairyland, where a lot of help is needed. We’re glad to be here and offer our support in any way we can for the dairy farmers out there. We’re going to have a good day. Thank you all for being with us.”

Cool and resilient guy that he is, Willie soldiers on, but it’s all too obvious he’s not the same man.

It felt very much like it was the last time we would see Willie Nelson at Farm Aid.

But throughout the day, Willie’s son, Lukas Nelson, showed he is up to the task of continuing the mission of speaking up for farmers while making great music with American music legends. It almost seemed like a conscious handoff: Willie and company saying to the audience, “You are in good hands. The show must go on.”

Some say Bob Dylan is responsible for Farm Aid.

Appearing at Live Aid on July 13, 1985, Dylan uttered one simple line that irritated Live Aid founder Bob Geldoff: “It would be nice if some of this money went to the American farmers.”

Willie Nelson heard that line and ran with it because it was a terrible year for Midwestern farmers – much like recent times, with low commodity prices and overproduction keeping farmers down.

They raised $7 million and started an annual event that is 34 years strong.

Like those farmers in the mid-1980s, low commodity prices are forcing producers out of business at alarming rates. Several speakers mentioned that Wisconsin is losing three farmers a day.

“In 2018, the number of farms fell to its lowest ever, at just about 2 million, and yet there are nearly 330 million of us here to eat,” said Farm Aid press conference host Jennifer Fahy, who also serves as Farm Aid’s communication director, in making the point that it’s tough times for farming nationally.

Farm Aid is all about diversity. Some people go for the music. Some go for the message. Some go for both. Everyone gets what they want, with great music and a great message for the farming community and the eaters (that’s the rest of us).

Factory farms were the subject of T-shirts and conversation from several of the artists, but most especially from Neil Young, who seems to relish the role of Farm Aid’s Jiminy Cricket conscience in admonishing us to pay attention by buying from local producers.

“The solutions are simple and big,” he said at one point. “We need to have people representing us that believe in the kind of things that we believe in. We believe in sustainability. I think we need legislation so all farmers in America use sustainable practices.”

The music throughout the day and late into the night was amazing, but so was the message: Family farms are hurting as much today as they were in 1985. Politics, bad policies, consolidation (i.e., factory farms) and constant weather challenges are the stressors causing the loss of so many family farms.

The press-conference format presented several groups of Wisconsin ag-oriented folks in a professional documentary, then Fahy questioned the real folks in the videos about what makes them do what they do. The emphasis throughout was that the face of Wisconsin farmers is diverse and resilient, and the spirit of those same farmers is robust and hopeful for the future of sustainable agriculture.

The first featured ag groups are making a difference through engagement in everything from networking to involvement in the political process. Representatives from the growing national advocacy group Dairy Together and the Green County-based Soil Sisters, which boasts more than 200 women as members, talked about who they are as a group, what they do and how they plan to effect change.

“We know we’re moving the needle,” said Sarah Lloyd, who farms with her husband outside of Wisconsin Dells, and represented Dairy Together (dairytogether.com).

“A movement to rebuild a viable dairy economy for family farmers and rural communities. All are welcome.” Regarding that last line, Lloyd invited all “eaters” in the crowd to join the movement.

Asked how people can best help the movement to support farmers, Lloyd said, “We need the federal government to take action on dairy pricing. Please do call your representatives in Washington, D.C. They will tell you, ‘Nobody wants to talk about balancing supply and demand. We’re in a free market.’ Tell them that they’re wrong. Tell them that you met the farmers that are pushing for it, and we’re a nationwide force ever growing stronger, so please join us.”

They were followed by two Oneida women – Toni House and Laura Manthe – who talked about growing native corn and other traditional crops as acts of both resilience and resistance.

Hmong farmer Vang Lee talked about being recruited by his mother to leave Minnesota and join her in Wisconsin to help her farm and sell at the farmers’ market, a job he has come to love since joining her in 2013.

“The vegetables, they don’t wait for nobody,” he said.

We also heard about regenerative agriculture from farmers who raise specialty grains for a local miller (graincollaborative.com), who delivers fresh flour to a baker, who bakes it into bread in which you can taste the difference; and family farmers Bert and Trish Paris of Belleville, Wisconsin, who returned to grazing their herd and found it made everything happier – the cows, the family that owns the cows, and the land and soil the cows graze on.

“I feel so lucky to be a grazer,” Bert said.

Asked to respond to the presentation, Neil Young congratulated the farmers for finding harmony with the Earth.

“It’s the way forward, and it’s a beautiful thing,” he said. “All you have to do is look at those cows, see the way they are heading into the field. They’re excited. They’re happy. What you’re describing is the key. It’s the key to our survival.”