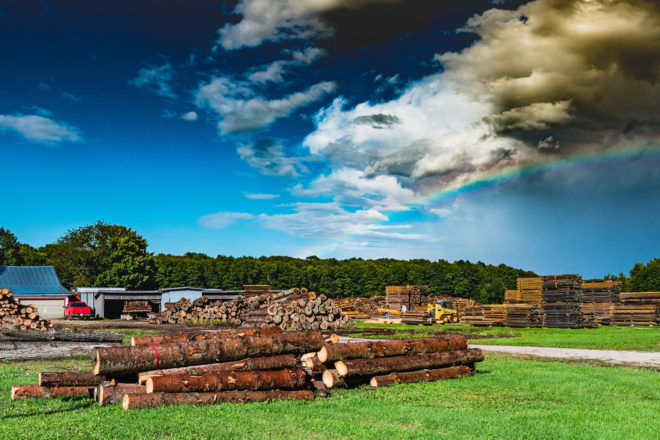 If Joe Young and Sam M. Lewis had known about the dynasty that had begun in Door County 17 years earlier, their 1919 hit song, “How You Gonna Keep ‘Em Down on the Farm,” might never have been written.

Ed Henschel, one of 15 children in a family from Elkhart Lake, needed to strike out on his own to seek his fortune, so in 1902 he and his wife, Mary, homesteaded 80 acres on what is now West Town Line Road south of Carlsville. They crop farmed, acquired a few cattle, two pigs and some chickens and raised five children in a tiny frame house. Their son, Ray, and his wife, Catherine, carried on with the farm, and their son Roger and his wife Helen took it over in the late 1970s. 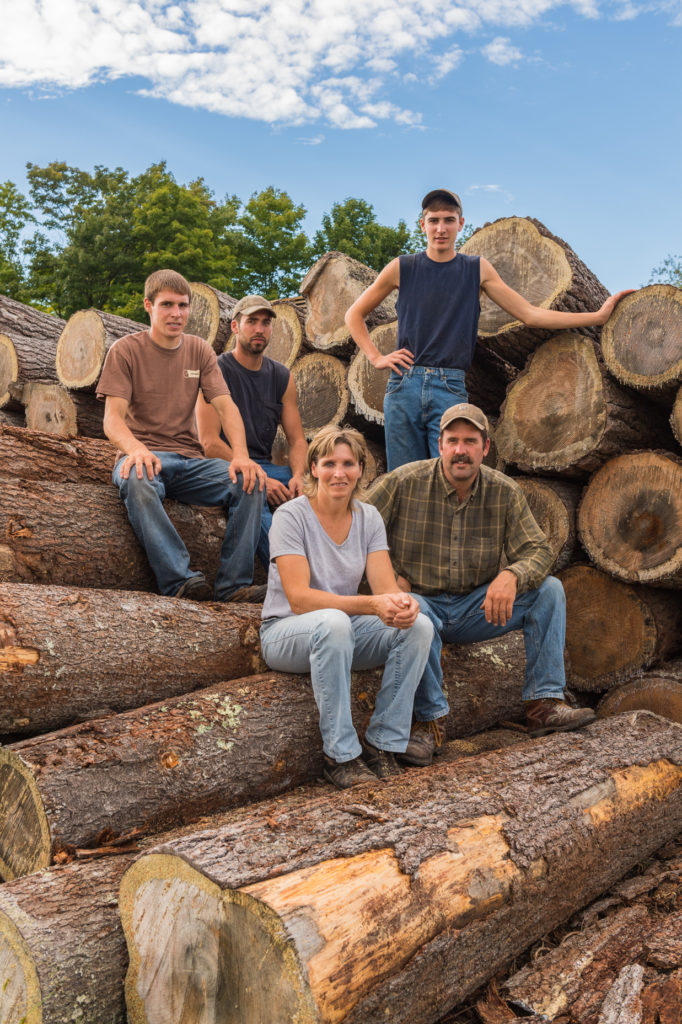 Parents Jamie and Mike are assisted by sons Brian, Mark and Kevin.

Now their son Mike, his wife Jamie, and their three sons — the fifth generation on the land — operate Cherryland Dairy Farm, which has grown to 600 acres of cropland, owned and rented, 50 milk cows, a 40-sow, farrow-to-finish operation, 1,200 maple trees for their syrup enterprise, six acres of sour cherries from their 88-year-old orchard (it used to be 15 acres, but was decimated by the late frost in 2014), four beehives and a commercial sawmill.

Mike and Jamie grew up on adjoining farms.

“I’ve known her since she was in diapers,” Mike said.

They attended SS Peter and Paul Elementary School together and started dating when Jamie was a sophomore and Mike a junior at Sevastopol High School. They married in 1989 and bought a smaller farm just a quarter-mile down the road. The bees came with the farm.

Did they ever consider doing anything other than farming? Absolutely not.

“We were born into it,” Jamie said. “It’s in our blood. You have to love it or you couldn’t continue. You have to be flexible because you can’t plan a day. There’s always something unexpected — a water pipe breaks, a cow calves, we don’t get rain when we need it, but it pours when there’s hay down in the field.”

She feels one of the greatest blessings of their lifestyle is that their boys were never in daycare.

“Not many families are lucky enough to see their kids all day,” she said. “We just shuffled them from one tractor to another. It couldn’t have been too bad a childhood, because they’re all still hanging around!” 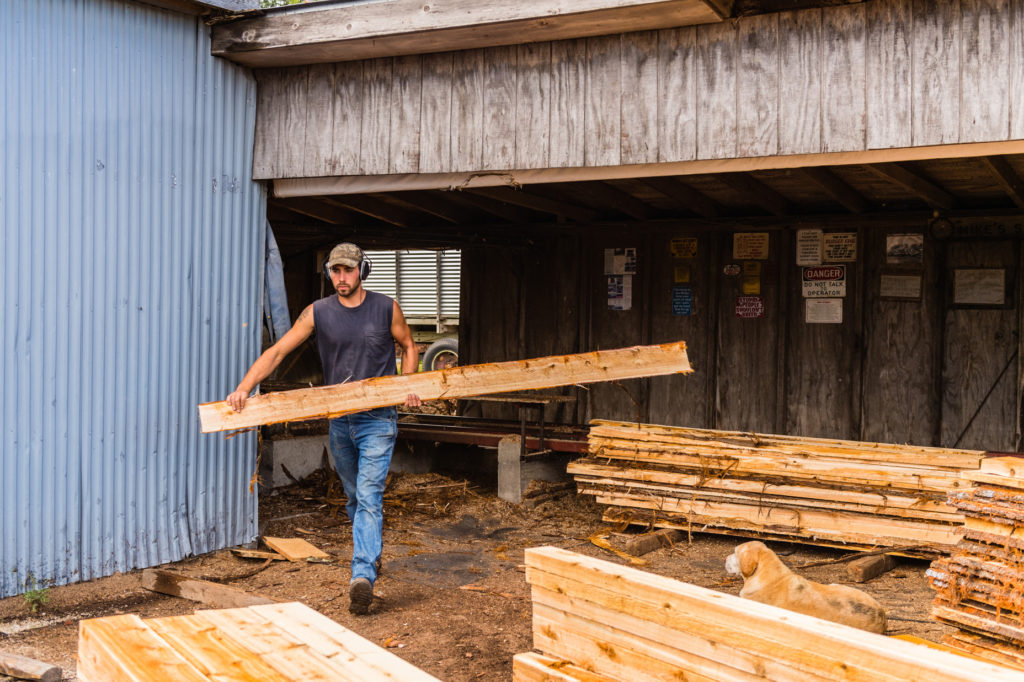 Mark helps out in the sawmill.

Son Mark, 24, took over the family’s hog operation when he graduated from Sevastopol School after spending several months on a combining crew following the harvest from the northern United States into Canada.

“That was hard work,” he said. (As if caring for 40 sows and their 500 annual offspring were just a hobby!)

He also is the farm’s chief mechanic, helps with the fieldwork and anything else that needs doing and is a volunteer on the Egg Harbor Fire Department. He plans to take over the farm when his parents retire. 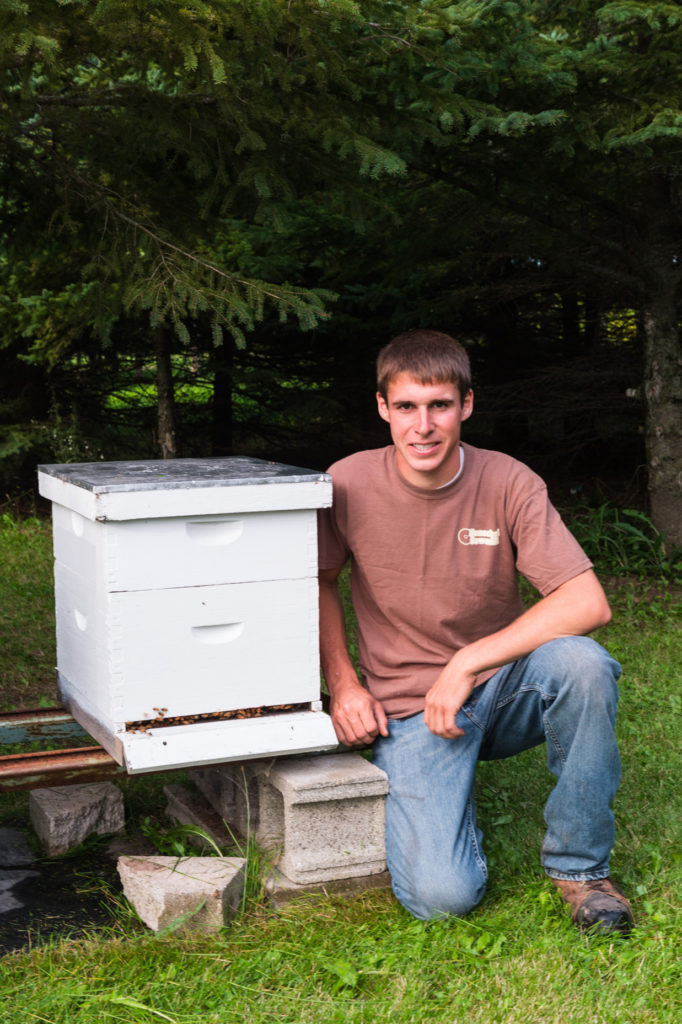 In addition to many other tasks on the farm, Brian tends to the beehives.

Brian, 22, does all the yard work, helps a neighbor with landscaping two days a week, has lawnmowing jobs in the evenings and Sunday afternoons, helps his uncle with milking in the morning and evening, and helps his mom at the sawmill. He’s learning to figure bills, determine board footage and run the blades in preparation for taking over the business when Jamie retires — although it’s hard to picture her rocking on the porch.

Bob Brandriff, a family friend, recalls stopping by 10 days before Jamie’s third son was born and seeing her crawl down from a huge piece of machinery. (And she, her sisters and their mom mud-wrestled a pig at the Valmy Thresheree several years in a row!)

Kevin, 18, graduated from Sevastopol in June and will study carpentry at Northeast Wisconsin Technical College come fall. It’s work he’s always loved. As a senior he was in the work study program and spent half-days with PortSide Builders of Sturgeon Bay. He took on jobs with neighbors when he was just 14. Like his older brothers, he’s helped in the fields, the dairy barns and the sawmill from the time he was big enough.

Jamie’s parents, Bernie and Shirley Geisel, had four daughters and a son, and they all grew up with chores on their farm.

“I always loved outdoor work — helping my dad in the field — rather than housework,” she said.

The Geisels were co-founders of the Valmy Thresheree and held it on their farm for 16 years. The Geisels and Henschels are all still involved with it and the dairy breakfast sponsored by the Sevastopol FFA each July. They hosted the breakfast, which draws up to 5,000 people, in 2001 and 2011.

“It’s a lot of work to get ready for it,” Jamie said, “but it’s great to see people walking around and seeing the animals up close.”

When Mike and Jamie married, they began farming with his parents. Mike and his dad had always logged in the winter. When the man who had sawed their logs retired in 1986, they built their own sawmill and Jamie worked with Roger until his death in 2002.

“I married into it,” she said, “I knew nothing about the lumber industry — not even that there were differences in trees — but when Mike’s dad died, I either had to take over the business or sell it.” 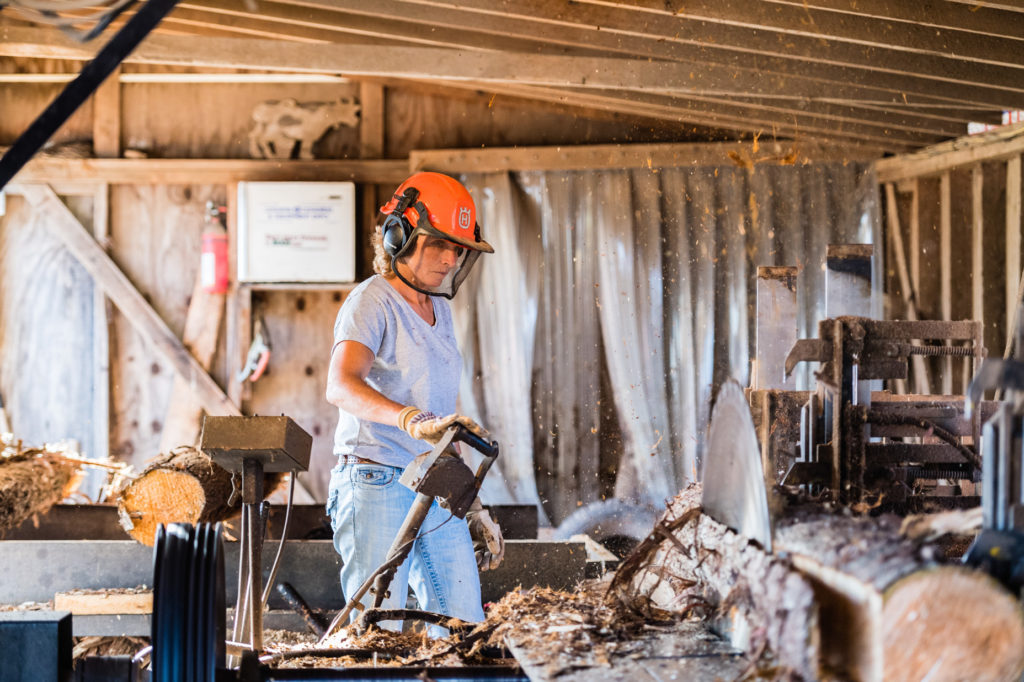 Jamie Henschel is believed to be the only female sawyer in Wisconsin.

She now runs it full time with help from the family. As far as they know, she’s the only lady sawyer in a four-state area who runs a 48-inch, chrome-toothed circle saw. She saws the logs and Mike does the custom planing and kiln drying. (You can see a 35-minute video on their sawmill operation, made in 2011, on YouTube.)

Mike and Jamie took over the farm operation in 2000 and moved down the road to the big house on Cherryland Dairy Farm, a setting Norman Rockwell might have painted. Mike’s dad died in 2002. His mom, at 76, still helps in the fields and comes at 5:00 am and 5:00 pm every day to assist with milking. Everyone milks, although with four milking machines, one person can handle the chore now, freeing the others for fieldwork.

“Some dairy farms are using robots to milk,” Jamie said, “but we like the quiet time with the cows. They’re like family.”

As busy as they are, the family spends a lot of time helping the community. Every year, third- and fourth-grade classes from county schools come to see how a farm works.

“It coincides with their study of Wisconsin history and natural resources,” Jamie said, “and they learn a lot. They see the hogs and visit the dairy barns, and Mike always asks how much they think a cow consumes every day.” 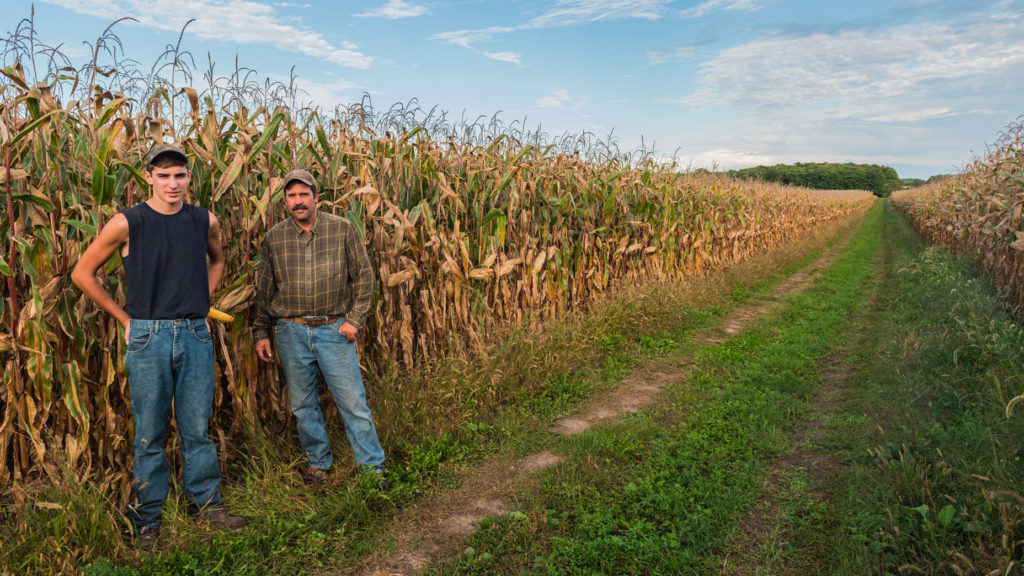 The Henschels have found success in their family-run operation by diversifying. Here, youngest son Kevin, left, stands with his father, Mike.

The kids get a ride in a hay wagon to the sugar maples, where they see the tubing that’s replaced the old buckets, enabling one person to collect the sap each evening. And at the Sugar Shack, they learn that sap collected early in the season contains about two percent sugar and requires about 40 gallons of sap to boil down to a gallon of maple syrup. Late-season sap averages just one percent sugar, and the ratio of sap to syrup is 90:1.

They visit the sawmill. They learn that the farm raises sour cherries to sell, along with corn, alfalfa, winter wheat, oats and soybeans to feed their livestock and, in a good year, have some left over to sell. Although it’s the wrong time of the year to harvest honey, students may hear that people who eat a spoonful of locally grown honey every day are apt to overcome allergy problems. Their tour ends with ice cream topped with maple syrup.

For more than 30 years, the Henschels have been supplying beef and pork to Marchant’s Foods in Brussels. They take two feeder pigs to The Farm on Highway 57 so visitors can watch them grow up. A new addition at the Henschels’ farm is a young goat The Farm couldn’t keep in a pen.

“He’s a lot of entertainment, ” Jamie said. “He just needed room to run.”

They have two horses but not much time to ride. Occasionally, they can get away for a day trip but mostly they relax by gardening, milking, sitting around a campfire on a summer evening after a long day in the fields, or — their favorite family activity — snowmobiling in winter. “There’s not much spare time,” Jamie said.

“If anyone does have spare time, they need to be sitting on a lawnmower.”

All the Henschel enterprises are family run with no outside help. They’re up at 4:30 every morning with a big breakfast at 7:00 after the milking is done, and dinner at noon (farm people don’t lunch). Supper is at 5:00 pm in the winter when the chores are finished. In the summer, everyone just grabs something when they can. Usually they’re all in bed by 9:00 pm, although it may be midnight if there’s something urgent to finish. It’s not an easy life but it’s full of love and laughter.

Jamie said there’s satisfaction every day in raising a good crop, putting it on the market, and keeping the family farm tradition going.

“Leaving the farm isn’t a consideration,” she said. “It’s trying to make a family farm work in today’s society. We are very fortunate that ours is so diversified.”

And that she and Mike have three sons to keep the Henschel tradition going.